The Butterfly and the Bee: Liverpool v. West Ham Preview

Share All sharing options for: The Butterfly and the Bee: Liverpool v. West Ham Preview

You could already see the post-match presser: Sam Allardyce in front of the microphones, smart smirk across his face, basking in the fact that he'd been the one to end Liverpool's thirteen game win streak. West Ham were on the verge of at least a point after leveling the score at 1-1, and Liverpool looked devoid of ideas. But then the Reds were granted a controversial second half penalty and hung on to win 2-1. That was the last time these teams met, and the tension will be just as high this time around.

The Hammers frustrated Liverpool throughout in the game at Upton Park with their physical play and organized defense, and Sam Allardyce will undoubtably utilize a similar strategy this time around. We can complain about Allardyce's tactics -- and believe me, we will -- but the truth is that Liverpool have to pick apart teams of this ilk if they want to qualify for the Champions League again.

Liverpool also need to find some consistency. They've showed enough thus far to eradicate concern of a total meltdown, but the loss to Aston Villa and shaky Champions League performance against Ludogorets characterize a team looking to rediscover its unity and identity after a summer of roster turnover. It's going to take time for the new players to gel into the team and for Brendan Rodgers to figure out how to best use his new toys, but with the level of competition at the top of the Premier League table right now it's imperative that Liverpool figure things out fast.

To do that, Rodgers might roll with the diamond set up that sent Liverpool to incredible heights last season. The diamond does numerous things to highlight Liverpool's strengths and mask their weaknesses. It is especially effective in the midfield, as Steven Gerrard's immobility is covered with two runners on either side of him. In the past those two players have been Jordan Henderson and Joe Allen. Unfortunately Allen is hurt right now and Emre Can, another candidate for that spot, is also out. But the shape is still viable against West Ham if Rodgers wants to put either Lucas or Coutinho opposite of Hendo.

In the conventional diamond, it's the job of the wing backs to provide width to the attack. That aspect of the formation was hit and miss last season because of Glen Johnson's regression and Aly Cissokho's struggles going forward. Now Liverpool have potential stars at both wing back spots who excel at bombing forward, which makes the formation even more effective for Liverpool. 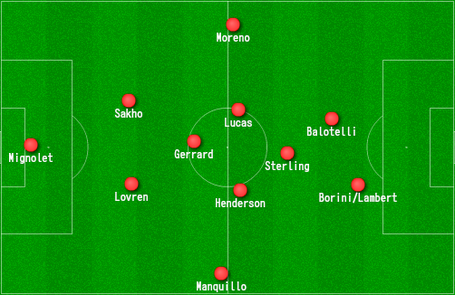 Without Daniel Sturridge in the team at the moment, the aforementioned 4-1-2-1-2 shape might become a 4-1-2-3 with Mario Balotelli up top and Lazar Markovic in to replace a center forward. That shift weakens the central midfield slightly, but it also improves Liverpool's ability in the final third. 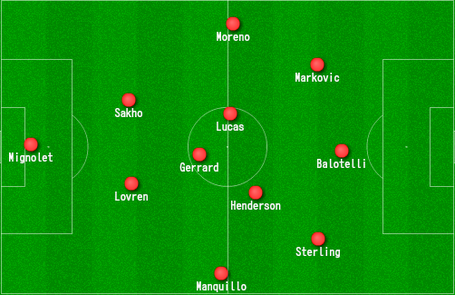 It won't matter how Liverpool set up if they continue to hurt themselves with defensive errors, and after Rodgers made that area a point of emphasis this week the hope is that there won't be any silly goal concessions against West Ham. Teams like West Ham are a pain in the rear end if you give them an early goal because they'll defend it like the three-headed dog from Harry Potter.

-It's important that Liverpool come away with three points after what happened last weekend, and the chance to beat Big Sam will add extra incentive. (Dan)

I really want to see the diamond with two strikers. Balotelli just doesn't look effective up top by himself. Im hoping for sterling at the point of the diamond with Balotelli and Borini up top. While I'm still not sure this will work any better than the formation we used against Villa and Ludogorets, I think the change has to be made because that setup clearly wasn't working. (Will)

If Fabio does indeed get the start, he'd better put in a good showing. He made it clear he wants to fight for a spot on this team, and cost the club a potential 14 million pounds as a result. So, he needs to take advantage of any opportunity he gets and show that he deserves a place in the squad. (Will)