The day of the Liverpool vs AC Milan game was upon us, and while Friday brought it's own brand of fun and fond memories, there was still many to be made.

Share All sharing options for: The Red Mist descends on Charlotte: Part Two

Note: Part one can be found here

After a few hours of much needed sleep back at the hotel, Saturday began with a flurry of anticipation.

The seated area where they served breakfast was packed with Liverpool fans, eager for the day's match. After breakfast, we headed back to RiRa, where we had finished the night before, for a sing song and a few pints. 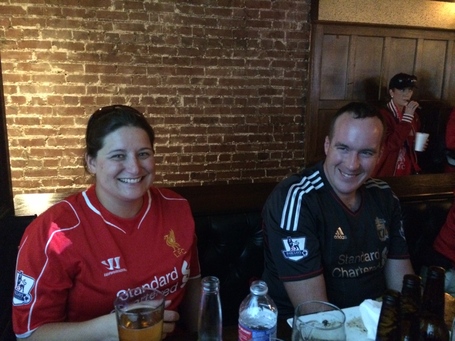 I was delighted that during one part of the singing session, that I was able to lead the Kop's song for Jordan Henderson, to the tune of "Mrs. Robinson" by Paul Simon, and the Simon Mignolet song, to the tune of "The Lion Sleeps Tonight" from the Lion King, before it got too cramped and I had to eventually move out of the circle and over to my friend Nick Elam, who showed up just as I was making my way out.

Around 2PM, we made our way to LFC Charlotte's home pub, Courtyard Hooligans for a tailgate, which had so many people at it, that it was more like a block party in a parking lot. 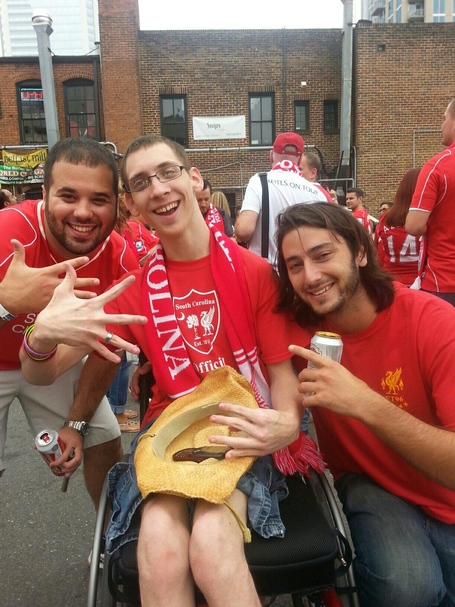 It was a sea of red, and in that sea of red, me, my mother and Jim were able to meet Kristian Walsh from the Liverpool Echo. Later on, I would find out that Kristian had interviewed Mum and Jim for his article on the pre-season tour as a whole, and even I would get a mention, even though I wasn't able to speak to him much.

The main reason I wasn't able to speak to him was because I was constantly surrounded by people who wanted to talk to me. I once again found Dawn Lifsey, as well as Nick and met a few new people as well, including a couple of the  people that I follow on Twitter.

Around 5PM, about an hour to kick off, groups of fans began a march to the stadium. It turns out that I, accompanied by a couple of other friends, had left before the rest of our group, but we were able to get into the stadium together without much fuss. 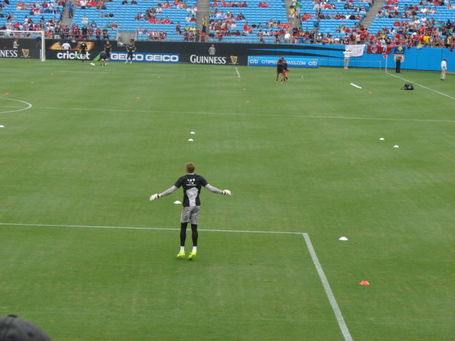 With me being in my wheelchair, my original seat was difficult for me to get to, and so we thought it would be best for me to sit in the handicapped section, just above where the rest of my group were sitting.

Thankfully, I wouldn't be on my own, as Battery co-commentator and good friend of mine Dane Arluckas and our friends Chase and Jeff Rathbun, were sitting just one row below me, and my mother decided to let them hang out with me. 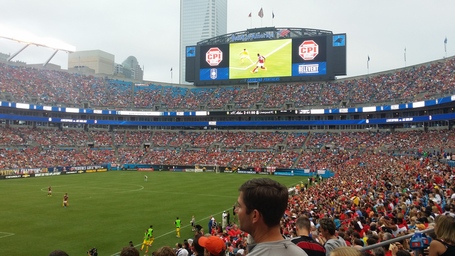 Our group got a little bit bigger, as Imani Williams (of ESPN World Cup fame, who I'd met the night before) and Neil Heyside would eventually join us. Dawn would also join our crew, visiting my seat before the match, during half time, and after the match ended.

Goals from midfielders Joe Allen and Suso gave Liverpool the straightforward 2-0 win. Though we knew, no matter the result, that we would be meeting Manchester United the following Monday, in Miami for the final of what I was calling a "Pseudo-Tournament", the International Champions Cup. 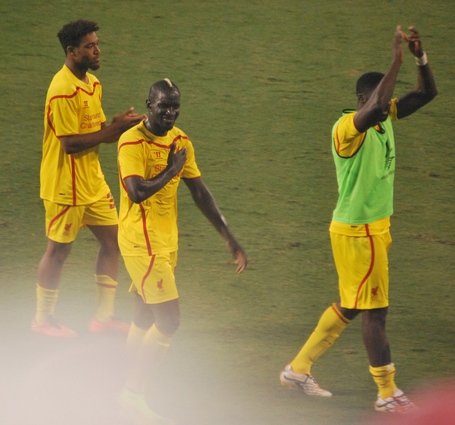 After the match, we were headed to Whiskey River for a post-match song session, and it so happens that all of our friends followed us out of the stadium, but had to stop at various points to drop things off before they met up with us again, but, then. Like the match, our group then began to expand a little, including my friends Nick Elam and Rex Cabrera, the latter of which nearly tackled me out of my wheelchair.

It turns out that Whisky River wasn't going to let me in as it was a 21 and over limit after a certain time, but after a conversation between the chairman of LFC Atlanta, who were the hosts for the evening, I was able to sit outside the place. 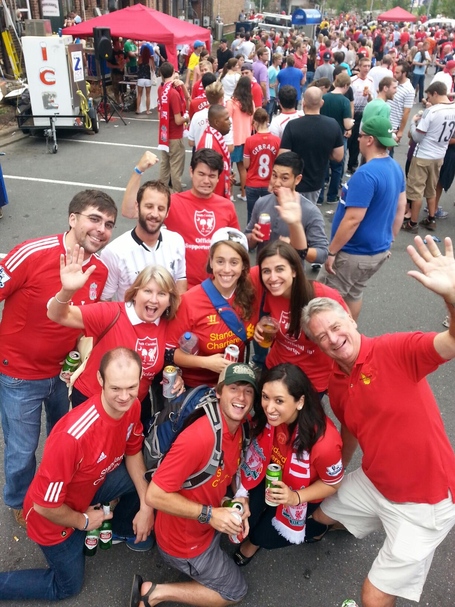 I still wasn't very happy that I wasn't able to get into the venue, and at the time, no one was around to talk to. So, eventually, I left my little corner, and went to talk to Dawn before she left.

Then, there came a few other people, Vinny Calabrese and Kaiden Pieszak from our Columbia group, that added into our group and conversation. Soon, Dawn had to leave, and Kaiden was walking about with another friend, and so that left me, and Vinny. Nick eventually found us and told us he was going to get a burger, and so Vinny and I decided to follow him.

We discussed a little bit of everything over dinner, including Liverpool's new signings, Didier Drogba's return to Chelsea, and Frank Lampard's venture to MLS, among other things.

After dinner was over, we headed back out to the middle of the epicentre between where we ate, and where the rest of our group was, and by that time, the Liverpool fans had completely taken over the Epicentre as a whole.

There were a good 200-300 Liverpool fans in a huge group outside Whiskey River, singing songs, and it expanded across both of the bridges that connected the bar to other places in the complex, while there were Liverpool fans who would join in as they walked past.

Part of me didn’t want it to end, but all the groups dispersed around 2am, and Mum and Jim, who hadn’t eaten yet, decided to go to the burger joint that Vinny, Nick and I had been at earlier. We were joined by a member of LFC Sydney, Colin Cantile, where he told us about his first trip to Anfield and we talked about music.said goodbye to Colin and went back to our hotel.

It was a bittersweet ending to a great weekend, full of amazingly surreal experiences with great memories along the way. Rumors are that the Reds will be back in America in 2 years, with rumored destinations being Dallas, Atlanta, and California. You can bet that LFC South Carolina will have a presence at at least one of the matches, and we look forward to seeing the lads once again.

TOP IMAGE: LIVERPOOL FANS FILL OUT THE PARKING LOT OF COURTYARD HOOLIGANS PRIOR TO THE MATCH. NICKI ACE PHOTO