The Red Mist descends on Charlotte: Part One

Liverpool's preseason may have ended this past Sunday with a win over Dortmund at Anfield, but Reds in South Carolina, and in America in general, are still getting over the euphoria of having their team in their own back yard.

Share All sharing options for: The Red Mist descends on Charlotte: Part One

Liverpool's South Carolina supporters' branch had a sprinkle of fans at the match against Manchester City at Yankee Stadium, and at Fenway Park in Boston against AS Roma, but had over 100 of its members, including their families, in Charlotte as the Reds took on AC Milan at the Bank Of America Stadium.

While the match was on Saturday, many of the Liverpool fans arrived on the Friday evening before the match to watch their team train at the Stadium, and also to attend a Q&A session with Liverpool legends Ian Rush and Robbie Fowler. Personally, myself and my parents, club Chairman Jim Lynch and Secretary Nicki Ace arrived there in early afternoon. We ended up going to The Omni hotel, where we were given tickets and passes to hand out to our members for the training and Q&A sessions. While at the Omni,  I met one of my friends from Twitter, Nick Elam, and also had a chance meeting with LFCTV presenter Claire Rourke.

After conversations with both Nick and Claire, and collecting the passes for the fan club, we were eventually spotted by Roy Yates, who writes a special "Reds In America" newsletter highlighting news and events for LFC in the US. He was on his way to a special Warrior event (Liverpool's shirt sponsor) and invited us to come along. While there, we had the pleasure of watching Liverpool players Kolo Toure, Suso, and Glen Johnson, as well as the aforementioned Rush and Fowler. try their hand, (and, on the whole, fail) at playing some Lacrosse. 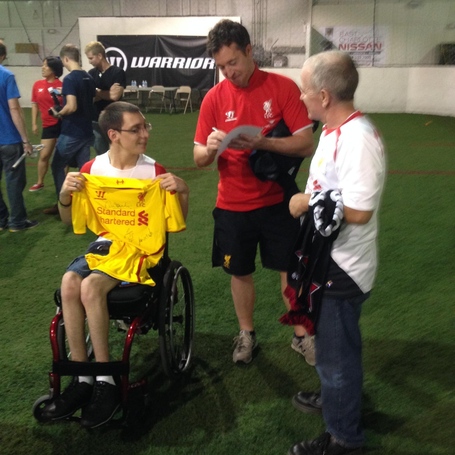 After the "challenge" was complete, we were able to get pictures with the three current players, and also the two legends. Jim, who grew up watching Ian Rush in his prime, was obviously a little star struck to get his signature. I have watched many a DVD in which "Rushie" was involved, and meeting Liverpool's all-time leading goal scorer, as well as a player that I grew up watching in Fowler, was a dream come true.

We were able to get pictures with all five players at one time or another, and I even pointed out Suso, who's still a young player who hasn't quite yet broken into the first team, and told him what I thought of his prospects for the coming season. Naturally, I would also do the same for Kolo and Glen. 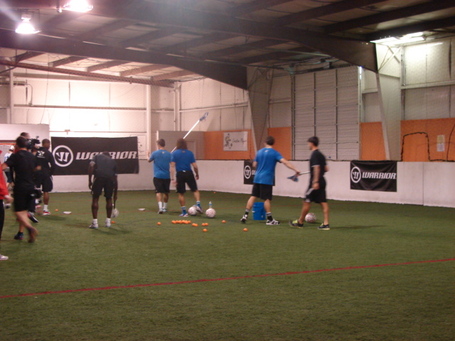 our fellow fan club members to distribute passes and tickets to go to the two other events scheduled for that evening. We were delighted to learn that a couple of our members got pictures with Steven Gerrard and Martin Skrtel, and traded stories of our meetings with the players. A little while later, we met other members from our Columbia group in a bar, and so a good few of us stood around talking for a few hours before the group dispersed to go to either the training session or the Q&A, as they were scheduled at the same time.

My parents and I decided to go to the Q&A, staged at the Rooftop 210 at the very top of the EpiCentre, where we got to meet members of various other fan clubs, like Atlanta, Charlotte, Australia, and New England among others, the latter from which I received a cool wooly hat from, which I will most likely put to good use when I go over to Ireland and Liverpool next month. I also won a scarf to add to my collection after winning a contest for Best Air Guitar as I rocked out to Dire Straits "Money for Nothing". 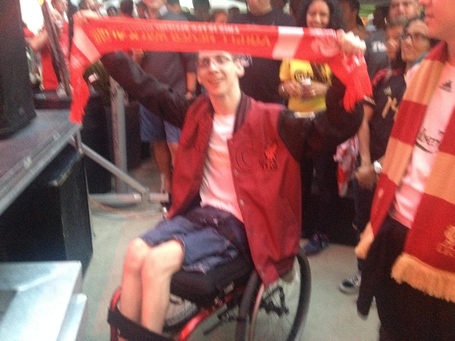 After the surprisingly short Q&A, Ian Rush and Robbie Fowler were available for a signing session, in which I got the scarf that I won signed to go along with the shirt that was signed earlier on in the day.

After that, I was able to spend a little bit of time with my friend Dawn Lifsey, who made the trip from the upstate to see the match. We stood around talking to another friend, Adam Kirchner, who was one of OLSC-SC's first members, and had been going to the Madra Rua since before we even thought of getting organized as a fan club. Adam is also the former head blogger of Anfield Asylum, and took a selfie with me and Dawn.

After leaving the Rooftop bar, myself, Dawn and her mother were at first going to go eat, but then decided to go to RiRa, a sister pub to LFC Atlanta's home bar, for what was a full scale party, before everyone eventually dispersed for the evening to return to wherever we were staying.

The party didn't stop there. There's still more to come from my adventures in Charlotte, though the match itself is warranting its own post. Be sure to stay tuned for the second half of the fun.

*Also Featured on CHSSoccer.Net, though by the same author.