As Liverpool trains in Boston ahead of their pre-season campaign around the States, the Reds show no sign of stopping their summer spending spree with reports linking them to an eight million pound move for QPR's Loïc Rémy.

Rémy, a 27- year old French international, bagged 31 goals between 2010 and 2012 for French side Marseille – attracting the attention of some of Europe's most successful clubs. Rémy opted for a move to QPR during the January transfer window of the 2012-2013 season before moving on loan to Newcastle the following year – demonstrating an ability to finish with regularity for both English clubs.

Throughout the blogosphere, Liverpool's move for the striker has been praised – and rightfully, so. Not only has Rémy shown the ability to score – both in the physical EPL and the venerable Champions League - but he is also entering the prime of his career at age 27. To acquire such a player for just eight million pounds is a shrewd piece of business by Liverpool's brain trust.

Moreover, on the surface, Rémy seems to add quite a bit of tactical flexibility to the club as well. He can spell Daniel Sturridge as a lone striker. He could partner with Sturridge as a part of a two-striker formation. And he could also line-up on the wing – as he did with Newcastle last season.

As a striker and a finisher, Rémy offers a lot to be excited about – especially at such a low price tag.

Take a look at the table below. Ted Knutson (a statistician doing some fantastic work) compares non-penalty goals per 90 plus assists per 90 across the four major leagues. The results are quite impressive for a striker with such a low price tag. His 0.72 NPGA90 slots him in at twelfth in the Premier League – just ahead of Christian Eriksen, Danny Welbeck, and Edin Džeko (all of whom would surely be sold for much more than eight million pounds). 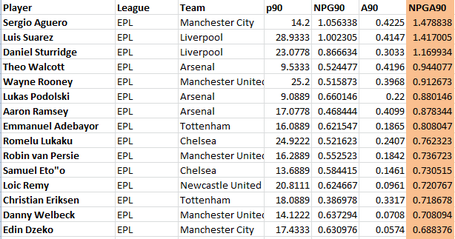 The results are even more impressive when considering that all the other players line-up for much more fluid, attack-minded sides like Manchester City and Arsenal – thus providing those players with more opportunities for goals and assists. Likewise, when we limit the analysis to just NPG90, we see that Rémy jumps into the top half of the table – leapfrogging Samuel Eto'o, Romelu Lukaku, Wayne Rooney, and some Dutch guy named Robin Van Persie.

How does Rémy do it? Among other qualities, he possesses two skills that are instrumental to his production: pace and shooting accuracy. Using his pace (and, cleverly, the threat of his pace), he is able to create space and get himself into good positions – as demonstrated by his 2.27 shots inside the box per 90 minutes.

And when he puts himself in the position to get a shot off, he does well with it – with 49% of his shots finding the target (on par with his future teammate Daniel Sturridge). Although many of these shots (and his ensuing goals) are due to his great positioning and footwork inside the box (see: stoppage time winner against Aston Villa), his pace adds a dangerous dimension to his game. Take a look at this play against Aston Villa.

Although Rémy ultimately fails to get a shot off before being fouled by World Cup starlet Ron Vlaar, he demonstrates what his pace can offer. After his covering midfielder is fooled by Rémy's clever fake pass, Vlaar steps into Rémy's path to cut his advance into the box. Most strikers would try to charge ahead to draw contact or fire off a low-percentage shot outside the box.

But Rémy dribbles towards the center before sliding the ball to the left of Vlaar with one touch and a burst of acceleration. Caught out of position, Vlaar is forced to concede a foul at the edge of the box. Rémy's ensuing free kick goes just wide, but the play is demonstrative of a skill set that will serve him well in a more fluid attack at Liverpool.

With pace, footwork, and an accurate shot, Rémy will be a threatening option when lining up at the top of Liverpool's attack and will provide a nice target for Coutinho's through balls. However, many have been touting the move for Rémy for the tactical flexibility it offers given his experience lining up on the wing for Newcastle. With that in mind, let's take a look at one of Rémy's best performances on the wing: a 3-2 loss to Hull City on September 21st.

On the surface, Rémy had an outstanding performance in a losing effort – scoring both of Newcastle's goals in a 3-2 loss to their Northern English neighbors. But upon further inspection, the match presents some concerns regarding Rémy's ability to play out wide. First, let's take a look at Rémy's heat map from the Hull City match. 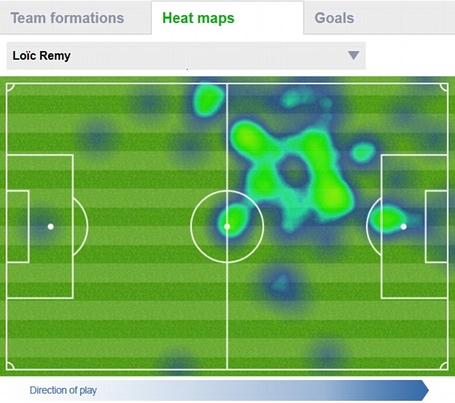 During his performance against Hull City, as with his other forays into playing out wide, Rémy often cut into the middle of the pitch – preferring to operate beneath striker Papiss Demba Cissé. Offensively, Rémy reaps the benefits of such positioning. Following a Sissoko cross, Cissé – who has swapped positioning with Rémy – pulls the center backs towards him before having his shot blocked. Rémy sneaks into the space opened up by Cissé's move to the outside to bag the rebound on a well-timed header.

For his second (shown below), he lays it off to left-back Davide Santon before darting into the box. Once again, with the center backs drawn towards Cabaye and Cissé, Rémy finds himself nearly unmarked in the box before pouncing on another blocked shot.

At first blush, it seems as though Rémy uses striker's instincts well as a winger – finding space to position himself to score two goals.But playing out wide lays more responsibilities at Rémy's feet – namely, ensuring Newcastle adds enough width to their attack and tracking back to help his fullback (Santon). For an analysis of the latter, let's take a look at a fantastic breakdown of Hull City's first goal by fellow Liverpool blog, The Inside Right. 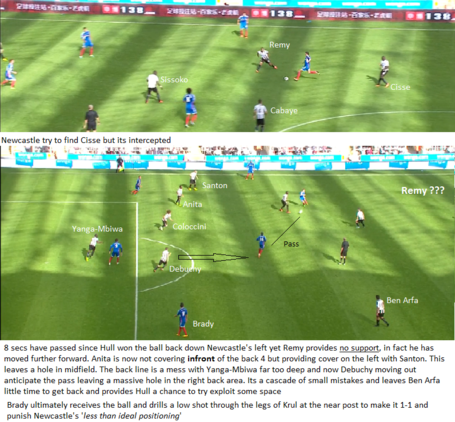 As author Rory Fitzgerald points out there, Rémy's decision to not track back puts Newcastle's defensive shape under considerable strain. Santon, Anita, and Sissoko are all forced out of position – providing Hull City's Aluko with ample space in the middle of the pitch. His teammate finds him with an easy pass – forcing Debuchy to leave Robbie Brady all alone on Newcastle's right wing and with plenty of room to slot home Hull City's equalizer. For a few more examples of Newcastle's struggles to maintain defensive shape with Rémy on the wing, check out the rest of Fitzgerald's great post on the subject (ironically, a preview of how Liverpool might exploit Newcastle ahead of their 2-2 draw).

Aside from failing to offer much in the way of defensive contribution, Rémy just doesn't look exceedingly comfortable out wide – as one might expect with a striker turned winger. The build-up to his second goal against Hull City is exhibit A. Cutting inside, he fails to find much space as Newcastle's attack becomes far too narrow and is forced to lay it off out wide to his left-back – who them opens up the space for Rémy to cut inside.

However, a winger is expected to have a bit more to his game beyond simply cutting inside (unless your name is Arjen Robben) – especially if you possess the pace that Rémy does. And ironically, if Rémy is forced to use his overlapping fullbacks to provide width to his build-up play, his responsibility to track back and cover for that fullback becomes even greater.

As a striker, Rémy's offers Liverpool a valuable skill set with a proven goal-scoring track record. But as a winger within Liverpool's rotation, his limited appearances there for Newcastle are bit concerning. Granted, Alan Pardew is not going to make anyone confuse him with Mourinho as far as tactical awareness is concerned. But Rémy's inability to curb his instincts as a striker in favor of his tactical responsibility must raise a bit of concern over his potential flexibility within Liverpool's attack.

At eight million pounds, Rémy is still a bargain – no matter his potential inability to adapt to life out wide. But unless the club find a way to provide cover for the fullback playing behind Rémy, his role within the squad becomes a bit of a question mark. As a back-up to Sturridge, you can't find many better than Rémy at that price. However, if Liverpool is looking for a back-up striker, why sign Rickie Lambert? Why pursue Divock Orgi? Especially if someone like PSV's Zakaria Bakkali is available for a similar price.

Acquiring Rémy for such a low cost is still a great piece of business. But the move's effectiveness may depend on how the club proceed from here. If they find a rotational option more suited for the wing later in the transfer window while deploying Rémy primarily as a striker, the purchase may very well look quite a bit smarter than it would if they expect the French striker to offer major contributions on the wing.

All statistics courtesy of squawka.com