The Giant and the Phoenix: How the Midfield Was Always the Answer

The Kop once sung of "The Best Midfield in the World." That midfield was slowly disassembled, but nine years on, a new-look Liverpool has made the Kop dream again, and the midfield is at the forefront of that.

Share All sharing options for: The Giant and the Phoenix: How the Midfield Was Always the Answer

The year was 2007 and Liverpool had the glittering look of a European giant. Having won the 2005 Champions League in what many consider to be the greatest European Cup final of all time, Liverpool were up against AC Milan once again - the second time they'd dueled for continental supremacy in three years.

Our side that day included two of the best holding midfielders in the game: Javier Mascherano and Xabi Alonso. Bolo Zenden and Jermaine Pennant manned the wings with Steven Gerrard in an attacking midfield role and Dirk Kuyt up front.

Liverpool lost 2-1, but their reign of excellence still had one more year of life left. And boy was that 2008/09 season magical. Fernando Torres was brought in and immediately looked like our next golden striker, the heir apparent to Michael Owen. But while Torres was immense, the midfield was the team's backbone.

As far as three man central midfields go, it doesn't get much better than Alonso and Gerrard in their primes alongside Mascherano. Alonso and Mascherano formed an incredible double pivot with Xabi pinging balls around the pitch and Maschy, the classic destroyer, sat next to him to break up counters. The work of those two allowed Gerrard to roam free and create a lethal, borderline telepathic partnership with Torres.

Missing out on the league title hurt, but the season had some incredible highs such as the 4-1 win over United and 5-0 aggregate demolition of Madrid. It was a fun year to be a Liverpool fan. And afterwards, it looked like Liverpool were prepared to kick on and climb to even grander heights.

But the midfield was slowly disassembled, and as this happened, the club's successful run disintegrated. Momo Sissoko, who had been one of Liverpool's most promising players, suffered a horrific eye injury and was never the same player again, leaving for Juventus in the winter of 2008. Xabi Alonso left for Real Madrid after the 2008/09 campaign, citing differences with Rafa (and, we assume, the existence of Gareth Barry) as the reason for his departure.

The weakened midfield and injuries to Gerrard and Torres plummeted Liverpool out of the Champions League, leading to Rafa's exit. Javier Mascherano followed Benitez out the door and the esteemed midfield three was down to one.

Roy Hodgson and Kenny Dalglish failed to properly rebuild and in their time in charge we saw some horrendous midfield displays. Christian Poulsen, Joe Cole, Jay Spearing, and Charlie Adam all saw significant time between 2010 and 2013. King Kenny did sign Jordan Henderson, but even he struggled for much of that time due to Dalglish's insistence on playing him on the right wing. Not only had the talent dropped off, but there didn't seem to be much of a plan to fix the problem or a tactical blueprint to follow. The midfield was lost and so was the club. 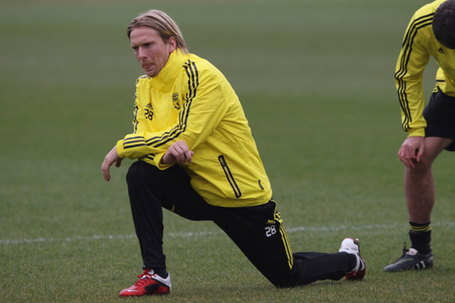 And then came Brendan Rodgers with his vision of a revitalized midfield at Anfield which would, like a phoenix, lift Liverpool out of the abyss.

One of the defining aspects of Liverpool's midfield under Rodgers has been the implementation of a high pressing system. In the statistical community, there's a strong belief that possession wins in the attacking third correlate with positive match results. For an interesting read on the subject go here. Last season, Liverpool's pressure attained incredible results, and many of their final third possession wins resulted in scoring opportunities. To get a clearer view of the effectiveness of the Liverpool midfield press, take a look at these action charts from an article on Anfield Index (charts are towards bottom of article): 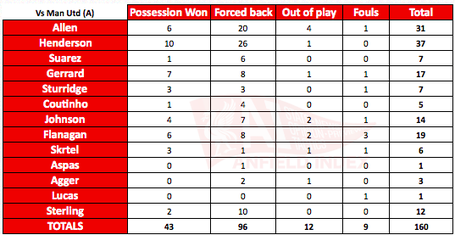 These are from two of Liverpool's most dominant performances last year - the 5-1 win over Arsenal and 3-0 away win over United. In those two matches, Liverpool had 281 total pressing actions and 263 positive actions. Not only did that pressure lead to chances, but it also allowed them to control match tempo.

Another important part of Liverpool's resurgent midfield is the fluidity that they play with. Rodgers picks players who are versatile enough to move between midfield positions within matches and cover for each other. Energetic players such as Henderson and Joe Allen are encouraged to play with attacking freedom while natural creators like Philippe Coutinho and Raheem Sterling are asked to track back and sometimes start matches from deeper positions. This allows Rodgers to be tactically flexible and makes Liverpool difficult to prepare for.

When Rodgers was hired, we wondered how he would handle Gerrard's aging process. His answer, which initially provoked raised eyebrows, was to move the captain into the registra role. Overall, it was a stroke of genius for Rodgers and an intelligent way to handle Gerrard at this stage of his career. In his deeper role, Gerrard is no longer required to cover as much ground which is important because his legs are not what they used to be. He's able to control matches and play superb long balls, which at his advanced age are his strongest assets.

The rebirth of the Liverpool midfield under Rodgers has led the team to dominate several high caliber opponents. The aforementioned 5-1 thrashing of Arsenal embodies our full turnaround. Incessant pressure put Ozil and Jack Wilshere in Hendo and Coutinho's back pockets, and the Gunners midfield was completely overrun. From his deep playmaking position, Gerrard orchestrated many of the fluid counterattacks that ripped Arsenal to shreds. It was, as Roy Hodgson might put it, football utopia. 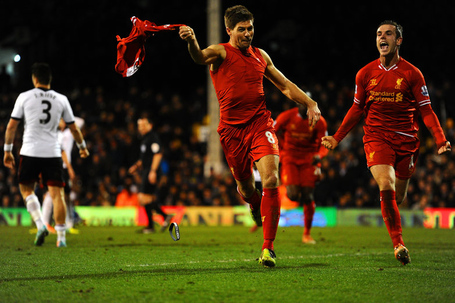 So, suddenly Liverpool are playing the best football since the Benitez era, with some saying it's better still. And who's behind that? Some say it was all SAS, who scored over 50 goals between them last year. Of course Luis Suarez and Daniel Sturridge are spectacular talents, but we had Suarez since 2011 and he was never as explosive as what we saw last campaign. Just like under Rafa at our best, while the attackers are a pivotal piece of the puzzle, it's the midfield that the team lives and dies with.

Rodgers isn't finished with the development of the midfield, but it looks like the unit is well on its way to achieving a similar level of effectiveness as Rafa's group, which of course is a huge compliment. Finally the midfield is back, and at last, so is Liverpool. The wait is over and the boys are ready to assert themselves as European heavyweights once more.

-By JAceKopite16 and Dan Bernstein