It's official: Lazar Markovic is Liverpool's fourth signing of the summer for a fee of around £20m. Markovic is a versatile attacker who can play out on the wing, the latter attribute making him an especially good fit for the Reds. His move is similar to the addition of Emre Can in that they're both young players expected to help the current cause as they develop into first team anchors of the future.

Thus far, the club has done well to bring in both potential stars and quality depth pieces. While exciting young talents like Can and Markovic are essential to the growth of the team, the additions of Adam Lallana and Rickie Lambert give Brendan Rodgers loads of tactical flexibility. Last season Liverpool often appeared thin in the central midfield because of injuries and suspensions, but now Rodgers has six viable options there in Can, Lallana, Joe Allen, Jordan Henderson, Steven Gerrard, and Philippe Coutinho. That's quite the turnaround from the group of mediocre players that occupied the center of the pitch at Anfield only a few seasons ago.

Let's take a look at some of the formations that might be deployed this season, how Markovic fits into the team, and how the midfield might set up.* 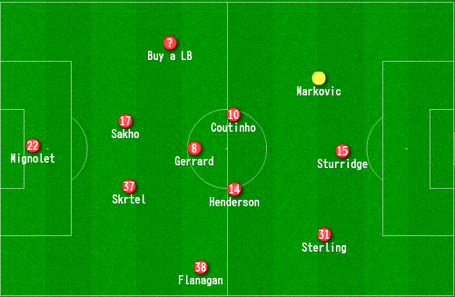 Entering last season, many people believed that Brendan Rodgers would lean heavily on the 4-3-3 to help Liverpool play fluid, desirable football. However, the 4-3-3 forced Rodgers to push either Luis Suarez or Daniel Sturridge out wide, and because of this, Liverpool shifted to the diamond formation so that both members of SAS could play up top.

But after the sale of Suarez, Sturridge stands as Liverpool's only prolific striker, which means that unless someone else is signed, we'll see a lot more lone central striker formations like the 4-3-3 this season. Before Markovic was brought in, the problem with the 4-3-3 was that there wasn't anyone to play on the wing across from Raheem Sterling. Now, Markovic slots right into the left wing spot and provides balance for Liverpool's attack, making the 4-3-3 an attractive option for Rodgers once again.

I mentioned it above, but it's worth repeating: the players that I had to leave out of the midfield here is a testament to the depth that is being stockpiled. The above lineup looks like a quality side (assuming Liverpool sign a left back), yet the likes of Lallana, Allen, and Can are all on the bench. Finally Liverpool fans will see some impact subs rather than Iago Aspas or Victor Moses trotting onto the pitch in the 75th minute. 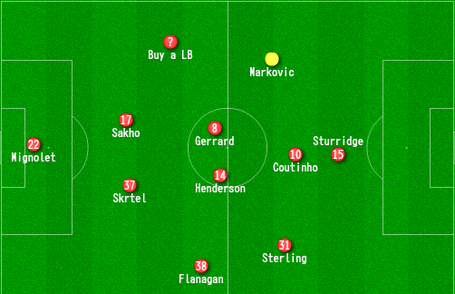 Liverpool didn't utilize a true double pivot at all last season, but with Markovic able to play on the wing opposite from Sterling, the popular 4-2-3-1 becomes an intriguing option. In theory, Liverpool's personnel works well in the 4-2-3-1 as the double pivot set up shields Gerrard, the deep lying distributor, by pairing him with an active, disciplined midfielder such as Hendo or Can. Additionally, Coutinho or Lallana are free to venture upfield and link with the forwards to engineer the sort of lighting counter attacks that we're getting used to seeing at Liverpool. One potential issue with this formation though is that the left side of the defense could be exposed if Markovic doesn't track back. 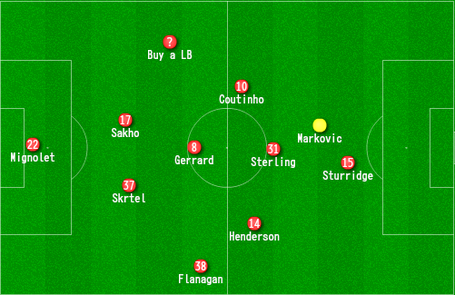 Let's not forget the diamond, which propelled Liverpool to a historic run of form last season and set up a scintillating title challenge. While Rodgers may play Fabio Borini or Rickie Lambert parallel to Sturridge, there's also a chance that he uses Markovic as a second striker. No matter who leads the attack though, it's clear that Rodgers likes the strength of the midfield in this formation and I expect to see more of it in the upcoming season.

Markovic might be a man for the future, but he clearly holds a place in the team right now as he provides balance in winger based formations when he plays opposite Sterling. Even with Markovic in the side, there aren't too many wingers at the club, and the likes of Jordan Ibe and perhaps even Oussama Assaidi (if he's not sold) will get opportunities to prove themselves.

On paper, Liverpool have one of the deepest and best midfields in the Premier League. While the cast isn't star studded, they're a group that works cohesively and will accomplish what Rodgers asks of them. Now let's hope that the Transfer Committee go buy a left back and get the defense sorted.

*Note: I realize that Brendan will use more than three formations this season. He's a magician. These are just a couple that he might deploy.

**Note Part Two: The graphics were created on outsidetheboot.com's Tactics Creator which is an extremely useful site for creating your own tactical analysis graphics. Thanks to them.