Brazil Must Fix Tactics, But Win Over Croatia Might Convince Them Otherwise

Share All sharing options for: Brazil Must Fix Tactics, But Win Over Croatia Might Convince Them Otherwise

Brazil beat Croatia 3-1 to kick off the 2014 World Cup, but it was clear that they were not at their best despite playing in front of more than 60,000 adoring fans. Luka Modric and Ivan Rakitic repeatedly facilitated dangerous counter attacks against the hosts, finding acres of space down the left hand side of the pitch. Most of this boils down to tactical incompetence - there's no way that a team of Brazil's ability should be repeatedly put on the back foot at home against a nation missing one of their best players in Mario Mandzukic. Let's look at what went wrong. 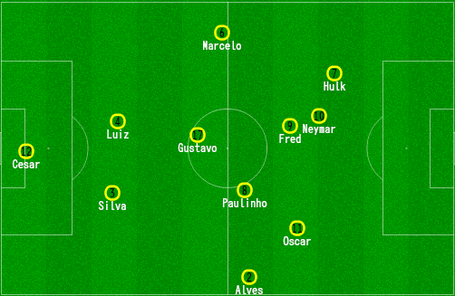 Brazil lined up in a 4-2-3-1 formation that lost some of its shape as the match progressed, which you can see in the average positioning chart above. Fluidity is a cornerstone of Brazilian football, so their digression from the initial set up was to be expected. The lineup that manager Luiz Felipe Scolari fielded provided little surprise aside from the inclusion of Paulinho in the central midfield. That questionable decision proved costly as Paulinho struggled to handle his defensive duties, an issue compounded by Dani Alves' refusal to fulfill his own responsibilities. Alves spent most of the game pushing forward, and without a capable defensive midfielder beside him, Brazil became prone to counter attacks. 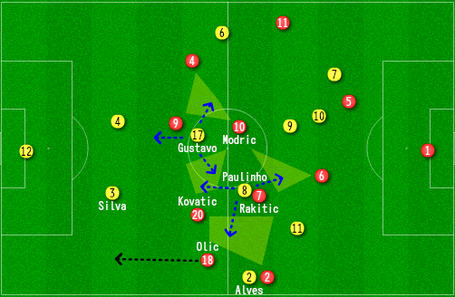 Bringing Croatia's average positioning into the picture, we're able to visualize the pockets of space that Paulinho was expected to cover with Croatia in possession. For a man known more for his creative flair than his tactical acuity or defensive commitment, this was a big ask. When you consider that his skill set was matched up against two world class midfielders and that Dani Alves, his partner on that side of the field, was often pushed up past the halfway line, it seems that Paulinho was doomed from the opening whistle. 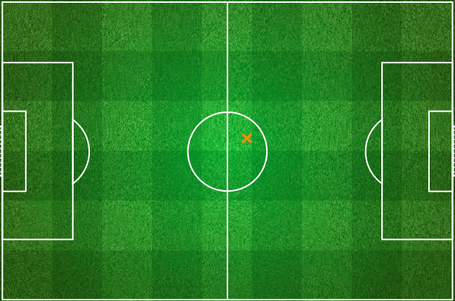 As expected, Paulinho's defensive activity chart is bleak. With all of that defensive responsibility, he only recorded one failed tackle. He was out of his element, giving Croatia lots of space to exploit on the counter attack. Again, it's a real mystery why Scolari picked Paulinho over someone like Fernandinho, a player who is not only miles better than Paulinho defensively, but also superior in terms of overall ability. Fernandinho would have provided ideal cover for Alves and his adventurous ways. 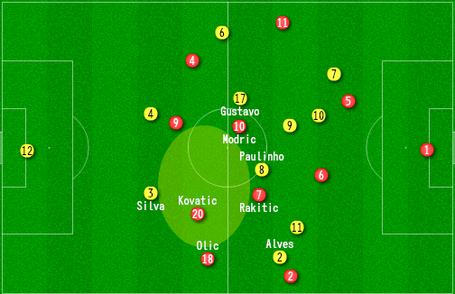 Here we see Brazil pushed up more, a stance that occurred often in the match. In this instance, Croatia are about to take their 1-0 lead. Notice the incredible amount of space Paulinho and Alves have neglected as Croatia takes possession. 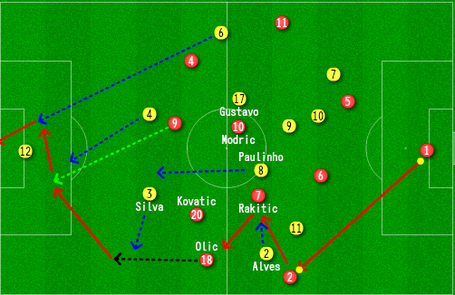 Now we see how the play develops, starting with a long goalkeeper throw from Stipe Pletikosa. We'll break down the early buildup of the play in a moment, but I want to point out how the positioning of Paulinho and Alves damages the whole team's structure. Because Paulinho and Alves are chasing the play, Thiago Silva is pulled out of position and David Luiz is stuck on Jelavic's backside as Jelavic runs to the near post to meet Olic's cross. 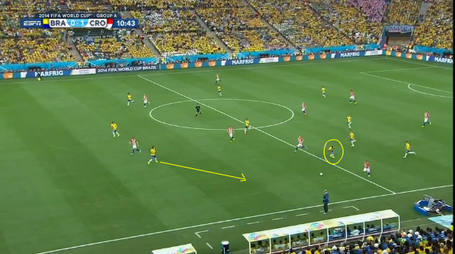 This freeze frame from the same play gives a clearer perspective of what went wrong for the Brazilians. Dani Alves (circled) whiffs on a lazy challenge and is caught horribly out of position, and Paulinho, who had wandered too far toward the center of the pitch, is also caught out, unable to stop Croatia's counter attack from springing into full effect. As mentioned, Silva is forced out to the wing to stop Olic, pushing Brazil into complete organizational disarray. A few seconds later, Marcelo turns the ball into his own net and Brazil are forced to chase the game.

For the majority of the match, Paulinho and Alves were exposed by the same type of build ups that led to Croatia's goal. Alves positioned himself too far forward, and Paulinho was simply not good enough to cover the vacated space. Brazil may have won the match (with some help from the referee and poor Croatian goalkeeping), but against a stronger team in the knockout round, they won't be so lucky if things don't change.

In this last screenshot, we get a bonus look at Dani Alves doing things other than defending. A fairly standard cross turned into a big chance for Olic when Alves completely lost him with the ball in the air. Brazil was fortunate in this instance though, as Olic headed just wide.

Dani Alves is, for better or worse, a staple of this Brazilian team and so he's going nowhere. But with him in the lineup, there's no way that Paulinho should be allowed to start. Brazil have enough creativity elsewhere, and that particular position is screaming for someone who's more defensively aware to cover for Alves. Scolari needs to come to his senses and see that there's not only a problem in his side, but there's also a simple solution: Fernandinho. The guy is built for the role that Paulinho floundered in, and it would be a shame for Brazil to miss out on a World Cup triumph simply because their manager is unable to see that.

In a way it's unfortunate for Brazil that they came away with a two goal victory; even if they'd lost, progression to the knockout round would've remained pretty much certain. After a win, there's less incentive for Scolari to deeply examine his team flaws, which is scary because if this particular problem goes untreated, it could very well spell Brazil's eventual demise.