Liverpool, known for their glittering attacking play, were frustrated and caged most of the game by Sam Allardyce's brutish tactics, but found a winner after a pair of terrible Anthony Taylor decisions canceled each other out. Gerrard sunk two more from the spot, lifting his team to the top of the table, and Liverpool can exhale after a closer than anticipated result.

Gerrard added two more penalty goals to his name, and the second finish was one of the most important ones of the season, nearly on par with his 90th minute goal against Fulham. He set up the first penalty with an absurd long ball that arced straight to Suarez. Interestingly, he attempted 12 long balls, but only completed 7 of them. Here's the chart: 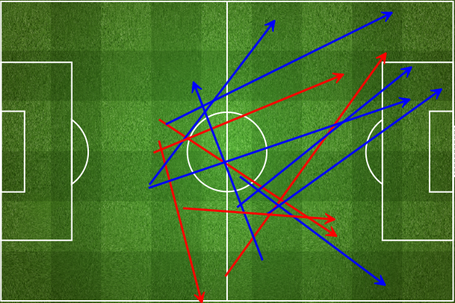 In all honesty, I wasn't too bothered by his sub par 58% long ball accuracy - it could have been better but there were periods in the game that called for Hollywood passes, since Allardyce's men made it difficult for Liverpool to create much on slow build up plays. Gerrard completed all three of his long passes into the penalty area, showing how he made things happen in an otherwise pretty lifeless match. Additionally, Gerrard was active defensively, with five clearances, a tackle, and an interception around his own box.

Sturridge has looked off for a few weeks, which has been smoothed over by Liverpool's success. He was wasteful against the Hammers, hitting unconvincing shots from poor angles. Here's his shot map: 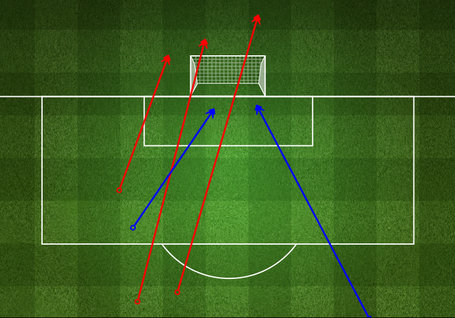 We can excuse an occasional streak of poor touches when Sturridge is banging in goals, but when his shot chart looks like this, it becomes hard for Liverpool to score against resistant sides. Sturridge is central to Liverpool's success, and in turn he's usually at the heart of the problem when they struggle. In fairness to him, short sour stretches are the norm for all strikers, but his energy level and performance in the coming weeks will be something to keep an eye on. We need him at his peak against City, and I expect an inspired bounce-back display.

We knew that Carroll would present a challenge because of his history with Liverpool and his aerial ability, and Big Andy (for once) met our expectations. Skrtel and Agger played admirably, but they could not impede Carroll's ferocious punch to Mignolet's face that set up West Ham's controversial equalizer. Likewise, Glen Johnson had no answer when Carroll rose to head against the bar, narrowly missing a heart-wrenching second goal for his team.

There were a few bad calls, but the awarding of West Ham's goal was the worst simply because the correct decision was already made by the assistant only to be irrationally overridden by Taylor.

You could see from his celebration how much the second penalty meant. I'm not sure if Liverpool could have scrapped in a winner if Gerrard missed there, since they looked frustrated up until that goal. After they went up 2-1, Liverpool were able to pass it around West Ham, closing the game out with ease.

If Carroll had found the back of the net with his header rather than the crossbar, this would be a differently toned article to say the least. It's not likely that we would have come back to win from a 2-1 deficit.

Suarez hit the bar twice with two ridiculous efforts to lob the goalkeeper, reminding everyone of his otherworldly skill and incredible creativity.