Moving beyond the wild world of wordplay, we breakdown Liverpool's 2-1 victory over West Ham United - one of the dullest, scrappiest, most god damn beautiful victories of the season.

Brendan Rodgers set the Reds out in the same 4-3-3 we saw against Tottenham, with Suarez and Sturridge roaming over the entire left half of the field and Sterling maintaining his right flank post.  The only change was Mamadou Sakho in for the injured Daniel Agger, with the Frenchman making his first start since Christmas time. 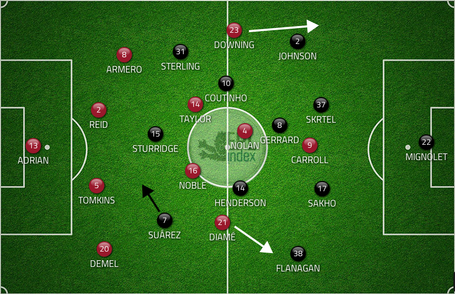 On the other side, no surprises. Sam Allardyce put out a squad that, in terms of both personnel and style, would have won the League title back in the Interwar Period.  Stay deep, stay compact, kill anything that moves - it's trench warfare really and you have the feeling Big Sam wouldn't be above lobbing mustard gas from corner kicks if he had the option.

Jon Flanagan has been nothing shy of exceptional since establishing himself in the first team over the winter period.  Versatile, technical, and of much stronger positional awareness than many of his more senior colleagues, Flanno looks to be the next Merseyside mainstay of Liverpool's back four over the coming years.  That made it all the more interesting to see the young full back have his most difficult contest not against a fleet-footed winger nor menacing inside forward, but against the brutish power of Mohamed Diamé.

Diamé, a holding or box-to-box midfielder for just about any other club, was used in sort of an inside-out wide position by Allardyce.  The midfielder tucked inside defensively to congest the center of the park and disrupt Liverpool's attacking movements before moving wide once West Ham was in possession. 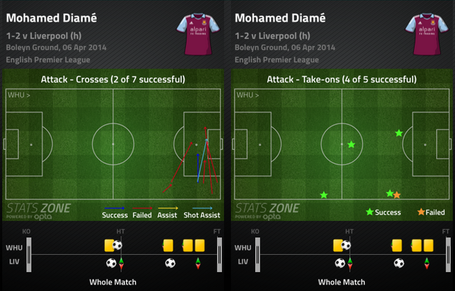 He was more successful running to the final third than being particularly clever once he got there but Diamé still posed a threat to Mignolet's net - not least of all the floated cross to the back post which Andy Carroll slammed against the cross bar.

And this brings us to the Giant Ponytail himself.  A record signing first for Liverpool and then for West Ham, Carroll is the undisputed focal point of the Hammers' attack and it's no surprise to see their form has dramatically improved since his return from a pesky foot injury that dogged him for much of the season.

Indeed, Liverpool's incredible season and Carroll's injury woes have completely validated BR's decision to jettison the striker to London.  As Liverpool fans well know however, Carroll's physical presence can cause problems for any side and the Skrtel-Sakho center back partnership struggled to fight him in the air. 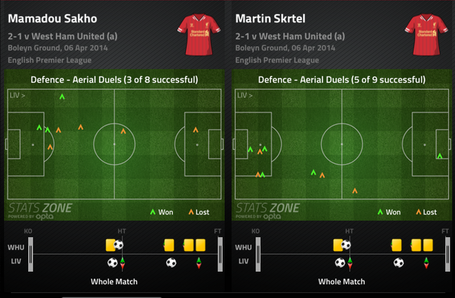 Of course, the reason "getting the ball wide and sending in an endless array of crosses" has become obsolete as a philosophy (don't tell that to David Moyes) is because it is a highly inefficient way of scoring.  Carroll caused Liverpool problems, West Ham's sole tally coming from his mugging of Simon Mignolet on a corner and Guy Demel tapping it home, but still didn't generate the kind of clear chances that win you matches.  Carroll did his part in winning ten of 17 aerial contests, but a look at Stewie Downing's crossing chart shows why this strategy just isn't consistently effective. 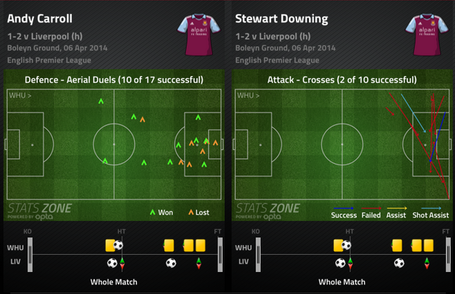 As a final note, I found it amusing to hear Rodgers talk up both Carroll and Downing in his pre-match media responsibilities.  Carroll received the accurate "he's a good player, just not for our system" remarks we all expected, but BR's evaluation of Downing was fantastic - "he was an excellent player who I didn't want to let go, but the money West Ham was willing to pay was just too much to turn down."  The "money" offered by West Ham was five million pounds, round about 13 million less than Liverpool paid for the mentally fragile winger who shushed his own team's fans after scoring a long-awaited goal.  Rodgers doing his best Bill Belichick "kill them with kindness" routine it seems.

Liverpool went into the break justly feeling as though a valid 1-0 lead had been wiped out by incompetent officiating.  Anthony Taylor's decision to allow West Ham's goal was bizarre, particularly considering his linesman seemed to wave off the goal for Carroll's punching Mignolet in the face.  Regardless, the Reds were not in their best form during the first half and Rodgers's decision to return to the midfield diamond we'd seen in recent weeks was not all that surprising. 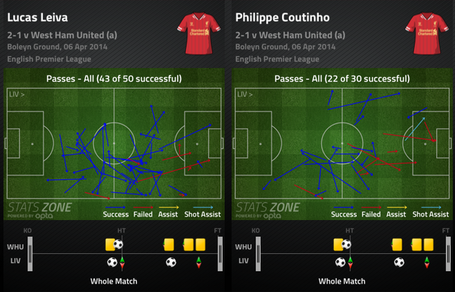 What was surprising though, was that Rodgers replaced the largely ineffectual Philippe Coutinho with his compatriot, Lucas Leiva.  With Liverpool clearly pushing for a winner to maintain its title hopes, I would have predicted Joe Allen -- more defensive than Coutinho but more adventurous in possession than Lucas --  to be the man brought on. 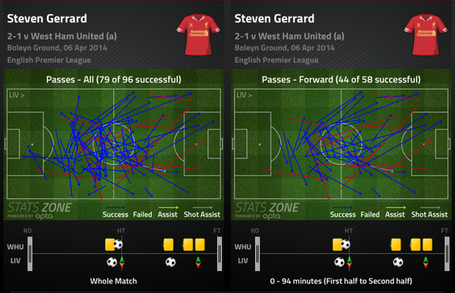 Lucas actually ended up playing Flanagan into West Ham's area for the game-winning penalty but, that aside, was largely straight forward in his distribution as we would expect.  What offset this conservatism by the Brazilian was Steven Gerrard having a fantastic game in his deep-lying midfield position.  It was odd to see him playing behind the nominal holder in Lucas, but Gerrard's distribution was surperb (his first-half pass to Suarez on the first penalty traveled a solid 60 yards and landed on a dime) and was crucial in Liverpool putting relentless pressure on West Ham in the second frame. 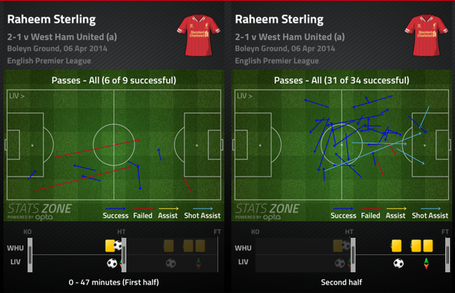 The real key to this switch however, came with Raheem Sterling's move into a central position at the tip of Liverpool's diamond for the final 45.  The young Englishman had a very difficult time getting on the ball in the first half, with very little space to run into from his wider spot.  After moving inside, Sterling became a massive threat, equally comfortable linking play and threading through balls behind West Ham's packed defense.  Had SAS brought its shooting boots, Liverpool would have run out a comfortable winner but instead the winning penalty was the lone reflection of a dominant second half performance by the Reds. 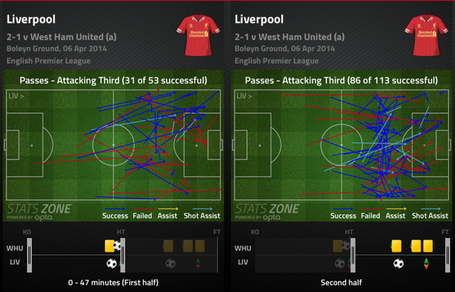 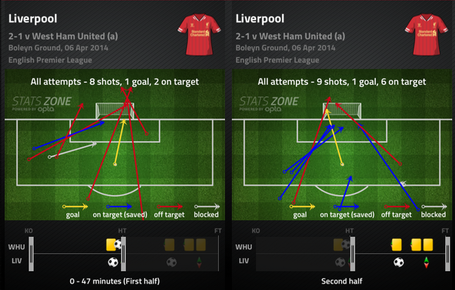 When Sam Allardyce goes into a bar he's not trying to get lucky, he's just trying to make sure no one else in the joint gets lucky either.  Like Tony Pulis and Roy Hodgson, Allardyce manages through fear.  Fear of conceding space, fear of giving up goals, fear of relegation.  He guarantees the purgatory of safety from relegation but winning nothing more and, in my opinion, a club with the history of West Ham should be aiming for something much greater.

A huge win for Liverpool, as (potentially) having to win out the remaining fixtures to grab the title will be difficult.  It's already nine on the bounce, making it to 14 straight would be truly epic.  So, I view this as earning a mulligan down the road.  This could have easily been a 1-1 draw, an unjust one at that, so grabbing all three was crucial for the final stretch.