One of the consistent narratives coming from Liverpool's 2-0 loss to Chelsea was that Jose Mourinho's brilliant defensive game plan was made all the more effective by the "reckless" attacking tactics of his counterpart, Brendan Rodgers. While it makes for a juicy "Master vs. Apprentice" storyline, the data simply doesn't back it up.

As today is National Honesty Day (good luck to all the politicians, investment bankers, and "long-time" boyfriends out there), I felt it important to set the record straight about Liverpool's 2-0 loss to Chelsea and, in the spirit of honesty, didn't have the time nor the inclination to cook up a full Tactics Tuesday this week.  Our loyal readership doesn't really need diagrams and chalkboards to understand what happens when ten defenders set up a campsite in their own penalty area.  What I did want to examine however, was the conversation floating about in our post-match recap: was Brendan Rodgers too reckless in his attacking game plan?  I didn't think so on first viewing and the data doesn't seem to suggest so in hindsight.

Let's start by saying that Chelsea's defensive shape and structure were superb.  Two banks of four behind the ball at all times, with Demba Ba annoying Steven Gerrard when he dropped between the center backs and Frank Lampard - Chelsea's most advanced central midfielder - doing the same when Gerrard moved forward.  Jordan Henderson's suspension and Daniel Sturridge's injury meant that Rodgers fielded Lucas and Joe Allen on either side of Gerrard, and this played into Chelsea's hands by further congesting the center of the pitch.  Liverpool attempted 42 crosses on the day, more than double its Premier League average of 17.  Considering Luis Suarez was the lone striker, Mourinho would have been absolutely thrilled with forcing the Reds into firing crosses - one of the least efficient methods of scoring - into the area, having given up on intricate passing.  Time wasting aside (or included, depending upon your taste), it was a fantastic defensive performance by Chelsea and one for which Mourinho deserves a lot of credit.

What it wasn't however, was a fantastic counter attacking performance.  Even against weaker opposition, Mourinho emphasizes sound defensive structure and efficient transitions to score goals - it's why Willian and Andre Schurrle still wear blue, while Juan Mata will be featuring in Manchester United's tour of Eastern Europe next season.  Labeling a team as a "counter attacking side" is far from a criticism and it can actually be a very exciting playing style, but this was not Chelsea on Sunday.

Check out both team's shot charts before Chelsea's goal in first half stoppage time.  For Liverpool, you have eight attempts, with two in the area and three from "reasonable" positions outside the area.  On Chelsea's side, you have five shots, two of which came inside the area, and the other three coming from similar spots outside the 18. 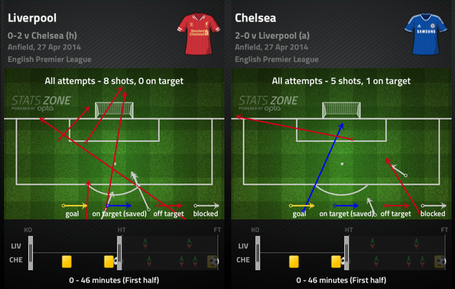 Let's take a look at Chelsea's best attacking movement, a counter attack to be sure, before the goal on 37 minutes.

Lucas has played a horrible pass directly to Nemanja Matic in the middle of the field and Chelsea are trying to break: 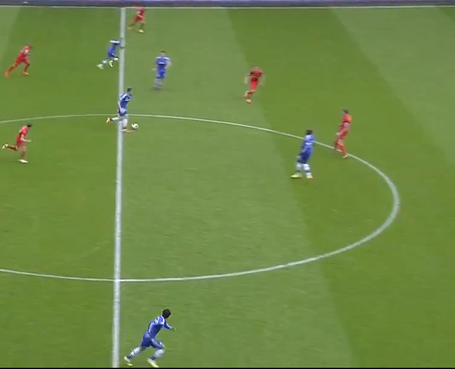 Yet, here's how Liverpool's 18 looks when the sequence ends with a shot by nearly-Red Mohamed Salah:

Liverpool's defense doesn't look too stretched for my money, whether you want to call a hand ball on a turning Jon Flanagan is your decision.

After Gerrard's horrific slip, Liverpool started the second half down a goal and needed to chase the game.  This obviously meant pushing forward more aggressively and, ostensibly, leaving the side more exposed to Chelsea's counter threat.  When examining the shot charts once again however, Liverpool still doesn't look overly stretched considering the circumstances. 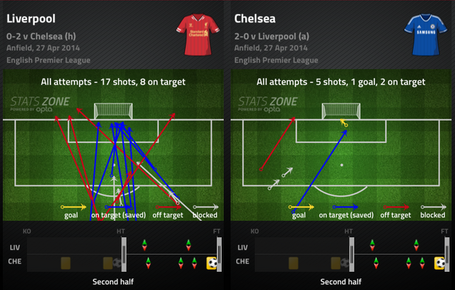 Besides walking the ball into an open net in stoppage time, Chelsea's best opportunity of the second half came through Schurrle's excellent effort (blue above) from just outside Liverpool's area on 62 minutes.  Although the German has been allowed to cut inside into a dangerous position, the play began not with a midfield turnover but with a long-ball knocked down into Liverpool's half.  Gerrard and Philippe Coutinho (jogging back like James Harden) should have recovered better, but this isn't the result of pushing too many men forward.

Give Chelsea and Mourinho a ton of credit for doing what Arsenal, City, and Everton couldn't -- withstand the obligatory opening barrage at Anfield through a tremendous defensive performance.  Just don't mistake this for an excellent counter attacking performance or Rodgers being too aggressive.  The away side never presented a consistent threat on the break and ended up scoring the game's crucial goal via a terrible individual error.

With this in mind, how Rodgers could or should have alternatively set out Liverpool is not immediately apparent to me.  No one will disagree that Chelsea is a better side than both Crystal Palace and Newcastle, but to play more conservatively in this match would have essentially meant accepting a draw and needing wins against the latter two.  Considering Crystal Palace has the league's stingiest defense since appointing Tony Pulis, Liverpool has never been guaranteed to take the full points from Selhurst Park this weekend.  Rodgers set Liverpool out to win against Chelsea because it was the best option for Liverpool's title hopes, not because he's a rigid attacking ideologue.