It's a little ironic that Tim Sherwood spent the build-up to Tottenham's trip to Anfield discussing the raised expectations and pressure facing title-contending Liverpool, as it was his side's total lack of pressure that ensured Spurs' defeat before the match even started. 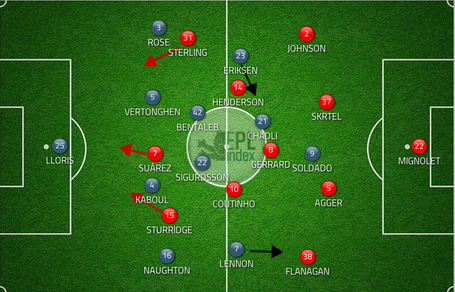 The majority of Spurs' defensive actions came right at the line between their own defensive end and the middle third of the field.  Considering this was where Tottenham was trying to hold it's defensive line, it implies the midfield was not providing sufficient pressure further up the pitch.  Essentially, the last line of defense was the only line of defense for Spurs, something compounded by Jan Vertonghen's injury and replacement by the slow-footed Michael Dawson. 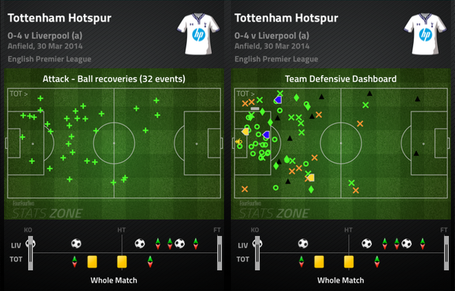 This deadly combination has been consistent to Spurs all season but Sherwood's use of Gylfi Sigurdsson, more attacker than holder, alongside Nabil Bentaleb only exacerbated the problem.  Here's the key pass in the build-up to Liverpool's opener, with Philippe Coutinho given plenty of time to knock a forty-yard diagonal over to Raheem Sterling. 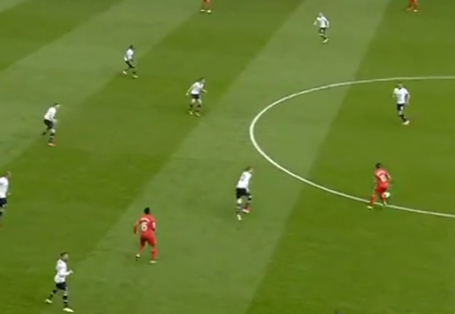 For the Reds, Brendan Rodgers has consistently tweaked his system to exploit opponents' weaknesses and it was interesting to see him return to the lopsided 4-3-3 (most notably used in Liverpool's demolition of Arsenal) rather than continue with the 4-1-2-1-2 that has served the Reds so well of late.

Liverpool's 4-3-3 is notable in that Rodgers allows Luis Suarez and Daniel Sturridge to freely swap between the central striker and wide position opposite Sterling.  What scares most managers away from this tactic is that it can leave one full back, in this case Jon Flanagan, exposed and in danger of being overloaded.  Rodgers however, can trust the diabolically competitive Suarez to track back and has coaxed enough defensive work-rate from Sturridge to make the system feasible.

On Sunday, the positional freedom between Suarez and Sturridge allowed them to take turns sprinting behind Spurs' advanced defensive line.  Suarez ended up being more heavily involved than the other half of SAS, but both players' respective passes received charts show the huge threat they posed getting on the end of vertical passing from midfield. 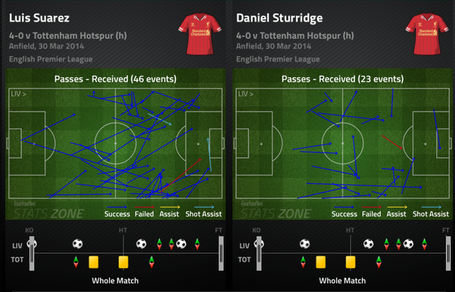 The play comes into motion with a completely unchallenged thirty yard run by Flanagan from left back: 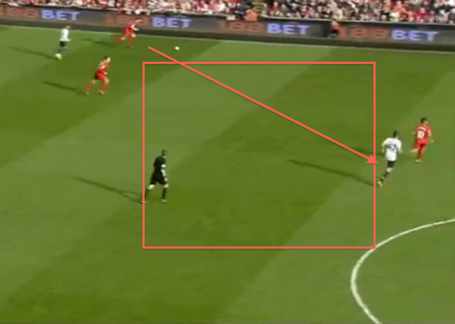 Proceeds with a baton hand off to Philippe Coutinho: 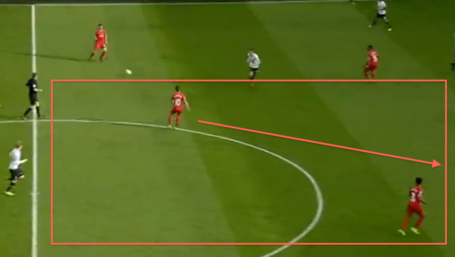 And ends through the Brazilian's own thirty yard run, with the ensuing finish exquisitely rolled to the bottom corner: 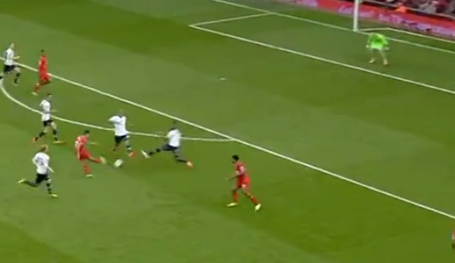 Just as bizarre as his love affair with this oxymoronic defensive strategy is Sherwood's continued use of Christian Eriksen on the left side of Spurs' midfield.  A classic number ten at Ajax, Eriksen has been foisted out to the flank with Nacer Chadli assuming the more central attacking midfield position Eriksen favors.  This decision gets its final dose of "Huh?" when you consider that while Eriksen's fellow Eredivisie import can play centrally, Chadli has actually spent most of his career attacking from a wide position.

In a similar burden borne by Shinji Kagawa and Juan Mata at Old Trafford, the remarkably gifted Eriksen has struggled to hit top form in an uncomfortable position.  From the left, the Danish playmaker has fewer passing lanes from which to choose and his lack of top-end speed prevents him from beating full-backs off the dribble.  When looking at their respective passing charts, it's disappointing to see Eriksen playing almost exclusively square passes, even moreso that Chadli doesn't justify his central position with incisive passing of his own.  As talented as he is, Eriksen has still provided some production from this slot, but crashing the back post for tap-ins is not what his game is all about. 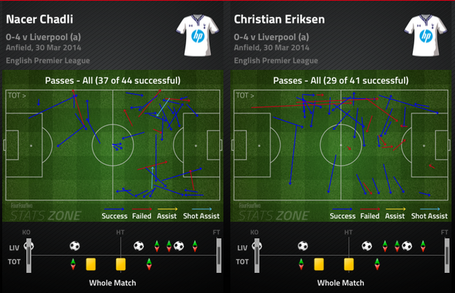 As if neutering one of the world's most creative passers wasn't damaging enough, Sherwood's use of a central playmaker out wide left poor Danny Rose waiting for the wolves at full back.  Rodgers flipped this lopsided 4-3-3 from the Arsenal win and the benefits were reaped immediately.  Liverpool's opener came through Sterling and right back Glen Johnson overloading Spurs' left flank, with the veteran full back's cross being bungled home by Younes Kaboul.

Though the goal came early, it was really just the start of a long day for Rose matched up against Sterling.  The diminutive attacker started out as a pure winger, but has since developed the technical and tactical acumen to take on increased responsibility inside (including time at the tip of Liverpool's recent diamond midfield).  On Sunday, Sterling put all of his skills together to absolutely torch Rose; cutting inside when Rose tried to shepherd him wide and flying down the touch line when Rose came narrow. 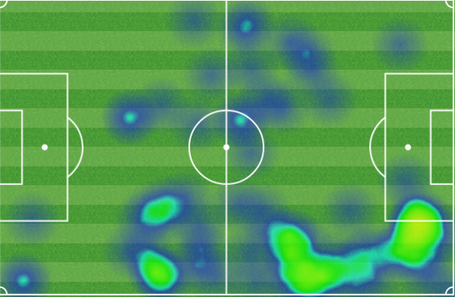 The performance deserved a goal, or at least a shot attempt, but Sterling created golden opportunities for each of Suarez, Jordan Henderson, and Sturridge from open play.  That the majority of Sterling's touches came on the edge of Lloris's area demonstrates the threat he posed all afternoon.

A Requiem for Tim Sherwood and Questions for Daniel Levy

Three months ago, Liverpool spanked Tottenham 5-0 with Spurs' combination of a high defensive line and lack of midfield pressure proving suicidal against a team littered with attacking speedsters.  That dark December night was the final nail in the coffin of Andre Villas-Boas's tenure at White Hart Lane and, though this massacre played out in springtime sunshine, it seems Liverpool may have once again brought the reign of a Tottenham manager to an end.

As of now, Spurs' goal differential of negative four belies their sixth-placed standing and Sherwood hasn't been able to cook up anything else after he unleashed the chipped-shoulder version of Emmanuel Adebayor (a true Dr. Jekyll and Mr. Hyde if there ever was).  Maybe with some more seasoning Sherwood will turn out to be a solid manager, as of now, he's not there yet and is not likely to be retained for next season.

The bigger question is whether Daniel Levy should be allowed to continue as the key decision maker at boardroom level.  Levy's love for dropping the guillotine on managers rivals that of George Steinbrenner and this blood-lust has kept Tottenham in a perpetual transitional period.  Spurs are neither Manchester City nor Chelsea with the luxury to use bank notes as wrapping paper, but the club has strong London support (ask rival Arsenal how to price gouge this demographic), a global fan base, and no debt mountain that needs to be fed.  In short, this is a club with serious resources and that Tottenham has won just a single trophy (the 2008 League Cup) during Levy's thirteen-year stewardship is reason enough to consider what kind of long-term planning is going on at White Hart Lane.

On to the next, really.  I may be alone when I say winning the title would be gravy for Liverpool this season.  This isn't to say it wouldn't be an incredible, unthinkable, miraculous achievement, just simply that the progress shown under Rodgers this year has, for me, skipped a couple of steps.  To go from mid-table to a title change in one season is nothing shy of preposterous and if you guaranteed Liverpool fans a top three finish back in August, they would have jumped at the offer before hearing the second half of the proposition.  So, while Sherwood mentions the heightened pressure, I would counter by saying this year's team is playing with house money.  Take it game by game and enjoy one hell of a ride.