Fernando Torres returns to Anfield on Sunday and nobody will care. He's a superhero who's powers have vanished. He's no longer a star, not even good enough to be the villain. Luis Suarez is who the spotlight dances upon now, and El Pistolero has an opportunity to break the Premier League single season scoring record this weekend.

Torres and Suarez, two prolific scorers who defined consecutive Liverpool eras and found success in distinct ways. And let's never forget that Torres was once one of the most prolific and successful strikers in all of Europe, netting 65 times in 102 league appearances for the Reds. Incredibly, Torres averaged the same number of league goals per game that Suarez has at Liverpool: 0.64.

But those goals were found through separate avenues, each player turning their own skillset into a unique art form. Torres at his best was a physical specimen - tall, fast, athletic. He could glide through the most rigid defenses, score with effortless grace. He was El Nino, the irresistible boyish bolt of energy from Madrid. And we loved him for it, even as injuries began to steal from his pace in Rafa's final campaign. After a disastrous showing at the 2010 World Cup, Torres spurned Chelsea and Manchester City to remain at Liverpool under Roy Hodgson, and for a while it seemed as if he could regain his form with 9 goals in 23 league games to start the 2010/11 season with the Reds.

That, coupled with the ousting of Hodgson and incessant rumors that some star in Amsterdam would arrive shortly to compliment Torres, gave Liverpool fans hope that things could turn around in the near future. But the union of Suarez and Torres, SAT if you will, never happened as Torres infamously decided to go to Chelsea for reasons that we'll never be completely sure of. Torres said later that year, "They made promises that they didn't keep and I left because I realized I didn't have time to be part of a project that would take years." I bet he wishes he was part of that project now. 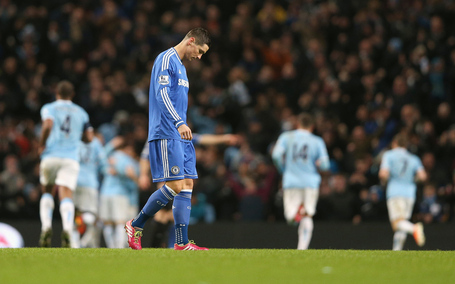 Suarez came to Liverpool without Torres and instantly won over the Kop with a substitute goal in his first appearance (against Stoke to boot). Andy Carroll arrived as well in an expensive move from Newcastle, but there was never a doubt who the star man was. At first, Suarez's primary contributions were as creator, but his shifty maneuvers were always present and he displayed the potential to improve his scoring record as he adapted to England. The goals would soon arrive in bunches, and when the money came knocking (I can't say trophies because we're talking about Arsenal) last summer, Suarez stuck around and avoided the same hatred that Torres eventually received from Liverpool fans.

I sometimes wonder how Torres would have fared if he'd remained at Liverpool and formed a partnership with Suarez. He couldn't have been much worse than he's been at Chelsea, but the athleticism that made him so special would have deteriorated with either club, so it's doubtful that he could have returned to top form with Liverpool.

Suarez has a better chance than Torres to survive as a top class forward in England because his success is technique based. He's never been the fastest or the strongest, but he's always been the quickest, hungriest, and most intelligent. And he can score from just about any angle. Unlike Torres, who faltered when his athletic talents waned over time, Suarez's attributes will not decline as sharply with age or injury.

Torres was so good, so adored, and then the light just went out. His decline wasn't gradual, it was wake-up-in-the-body-of-an-identical-twin-who-can't-play-football stuff. It's sad to see him trot around aimlessly now, the effortless nature of his play that once earned him applause now drawing ire from the Chelsea faithful. Even though Suarez seems less susceptible to such a dramatic fate, Torres' decline remains a reminder of the temporariness of success in football; to summarize, the shadow of a hero that we'll see in blue on Sunday should emphasize the importance of enjoying Liverpool's current run of form, because the magic won't last forever.