Welcome to the Big Show. The Big Red Ship keeps on rollin', let's breakdown the goods from this weekend's 3-0 victory over Southampton.

The final score line may have read 3-0, but this is a classic case of the scoreboard telling a completely misleading story. The Gremlin grabbed an early goal, then the Reds spent essentially the next 50 minutes hanging on for dear life. Brendan Rodgers then brought on Raheem Sterling for Philippe Coutinho, and the Englishman's immediate goal seemed to break Southampton's spirit for the rest of the way. A late Gerrard penalty gives us the final tally but had Adam Lallana hit nylon instead of wood in the first half, we may well be discussing dropped points instead of another leap up the table.

Rodgers trotted out a genuine 4-4-2 diamond (4-3-1-2, 4-1-2-1-2, etc. whatever. You got four defenders, four midfielders, two strikers, label it as you please.) designed to congest the midfield and isolate Southampton's center backs 2v2 against the Gremlin and Daniel Sturridge. The back five of Simon Mignolet, Jon Flanagan, Martin Skrtel, Daniel Agger, and Glen Johnson continued from last week's victory over Swansea. In midfield, Gerrard continued in the holding role while Joe Allen was rewarded for his fine Swansea cameo with a starting position. Level with Allen was Jordan Henderson, and the two occupied essentially "shuttler" roles behind point man Coutinho. As mentioned, SAS started together up top. 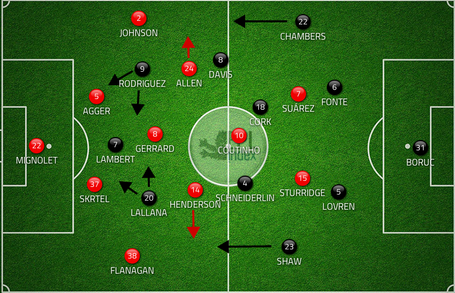 On the other side, Mauricio Pochettinho sent out an extremely fluid 4-3-3 that, I imagine, won him some admiration from the Liverpool faithful. Artur Boruc in net was shielded by homegrown full backs Calum Chambers (right) and Luke Shaw (left), with Dejan Lovren and Jose Fonte providing an international center back duo. Ahead of them, Morgan Schneiderlin, Jack Cork, and Steven Davis provided excellent balance in the middle of the park while Jay Rodriguez and Adam Lallana sandwiched lone striker Rickie Lambert.

As Gerrard said in the post-game presser, Rodgers designed his tactics around absorbing pressure and playing direct balls into the channels for SAS who were 2v2 against Lovren and Fonte. Not a bad idea really and I suppose any formation that produces the following screen grab is alright in my book. Suarez's opener came through his substantial force of will and equally substantial technical ability. In the run of play however, Liverpool was on the back foot for most of the first half due both to an impressive Southampton performance and poor individual performances. 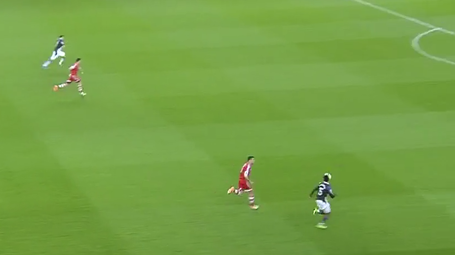 Let's start with what Southampton did right. For starters, Chambers and Shaw demonstrated why they are so highly-acclaimed by scouting departments across the island. The young duo broke forward constantly to overload Liverpool down the wings and offer their midfielders an outlet from the congested center zone. When they gained possession, it put Liverpool's shuttling midfielders (Allen and Hendo) between a rock and a hard place. They could either close down the full backs and thus expose space in the center of the park, or they could stay narrow and allow the full backs to smack crosses into the area. Had Liverpool been playing a side with technically limited full backs, picking a poison would have been an easy task. Chambers and Shaw however, consistently pumped in quality service to the area - with Shaw credited with four chances created.

Besides Chambers and Shaw proving to be prototypical modern full backs, the superb movement of Southampton's front three caused Liverpool all sorts of problems. Lambert is oftentimes labeled a "classic, battering ram number nine" but he actually sports a seven on his jersey and his movement off the ball showed him to be much more sophisticated than a simple target man. 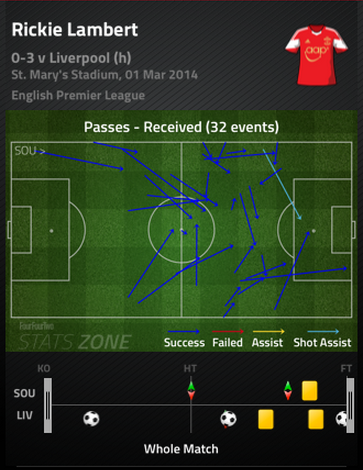 Indeed, his passes received chart shows him gathering the ball across the entirety of Liverpool's half - opening up pockets of space in which Rodriguez and Lallana had quite a bit of fun. Lambert only recorded a single shot throughout the match, but the supporting duo combined for seven and was a step ahead of Liverpool's defenders for much of the opening frame. 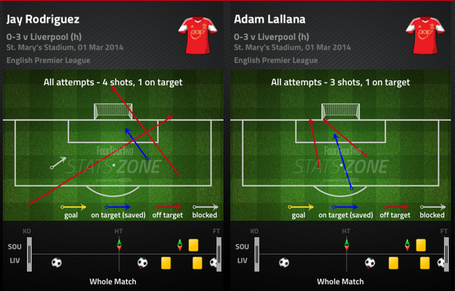 Let's go to Lallana's shot off the post on 32 minutes to see the Saints' excellent movement in action and also transition to Liverpool's poor individual performances. 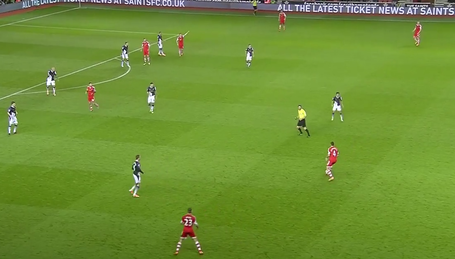 In this first frame, Shaw has been closed down by Henderson so he plays a simple ball over to Morgan Schneiderlin. The Frenchman proceeds to switch play to the right flank with a magnificent raking pass that Charlie Adam envisions every time he gains possession. In the following frame, we see Johnson sprinting to close down Rodriguez and Allen (understandably) late in covering Chambers's impending overload. The technical quality in Southampton's ranks has allowed them to exploit Liverpool's narrowness.

After neat interplay by Rodriguez and Chambers, the attacker is afforded the time and space to settle possession and pick out a target in the area. Now, Lallana's movement here is crucial and typifies the threat posed by himself and Rodriguez. Having started between the Flanagan - Skrtel - Gerrard gap, the Saints captain makes a neat curling run across Lambert and splits Liverpool's center backs.

It's runs like these that let the Saints both control possession and also overload Liverpool's defense to exploit quality service - essentially having their cake and eating it too. So, full credit to Southampton but some Liverpool players deserve some unfavorable shout outs here.

For starters, Schneiderlin having all day to sit on the ball and knock a cross-field pass is the direct result of Philippe Coutinho making no effort to close him down. Considering how narrow Liverpool's defending was, Coutinho needed to try and deny this kind of "reverse outlet" that eventually dragged the Reds out of position. The Sterling-Coutinho swap emphasized this point and we'll get to it in a bit. 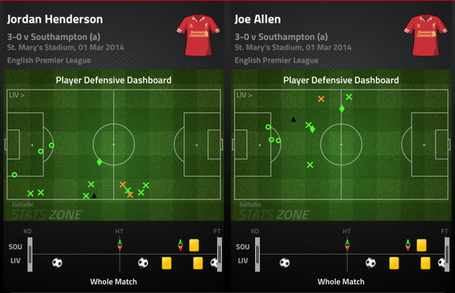 Further, Jon Flanagan simply did not have a good afternoon (Patrick Elder, go pop yourself a bottle of champagne). If you compare the defensive dashes of Henderson and Allen, you can see how much wider and deeper Henderson had to track back. You can also consider Shaw's four chances created further evidence, but the most obvious example was Rodriguez's golden opportunity not long after Lallana's warning shot.

Then, Flanagan got absolutely burned by Shaw and watched Southampton break directly down the vacated left channel. Henderson duly pulled wide towards Lallana, Gerrard closed down Shaw centrally, but it took an excellent save by Mignolet to stop Rodriguez's effort.

There was an early change by both managers. Pochettinho lifted Steven Davis for Gaston Ramirez at the half, adding a little extra attacking quality but largely keeping the same shape. Meanwhile, Rodgers waited ten minutes to replace the ineffectual Coutinho with Sterling.

There are few bigger fans of Coutinho than yours truly, but this may have been his worst game in a Red (yikes, make that "hideous purple and black pattern") shirt. As mentioned previously, he failed to shepherd play defensively and, unfortunately, was totally off the pace in attack with consistently stray touches. Not to kick a dead horse, but Coutinho was not earning his keep in this particular match.

As a brief aside, I think the biggest misconception with a diamond/4-3-1-2 is that the point man (or "number ten" or "trequartista," whatever you wish) is invariably dead-weight defensively. As such, Coutinho's (poor) impersonation of Riquelme at the 2006 World Cup was exceedingly frustrating. The point-man here may not have a direct player to mark, but Sterling showed that energetically squeezing play laterally can have a huge impact on the system's success.

The proof in the pudding? 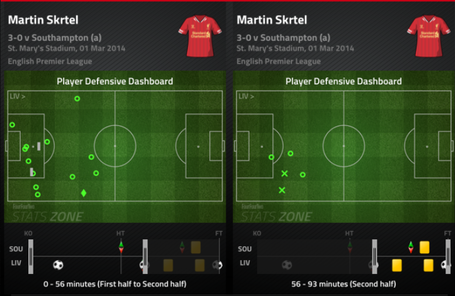 Let's start by looking at Skrtel's defensive dashboard. His first 56 minutes were not only busier, but oftentimes spent inside his own penalty area. In the final 35(ish) minutes, he was clearly less bothered and also rarely forced into last-ditch defending. 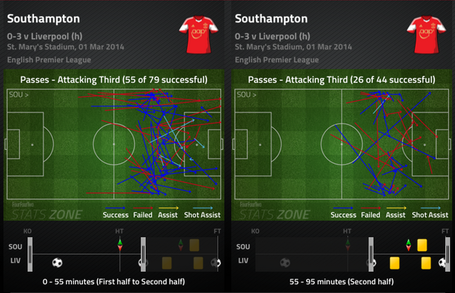 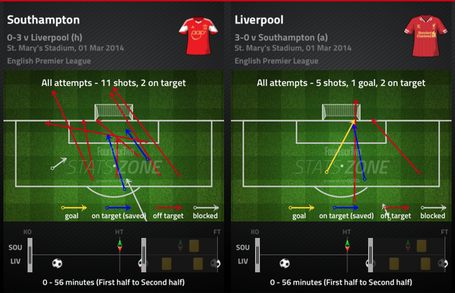 Finally, the two teams' respective shot charts confirm the Reds' dominance after Sterling's arrival. Over the first 56 minutes, Southampton outshot Liverpool 11 to five and probably wished they had done more with their nine shots inside Liverpool's area. Over the remainder of the match, Southampton recorded just two shots (none in the area) while Liverpool blasted seven with six inside the area, and the two goals. 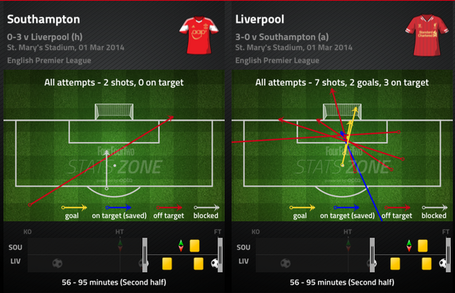 Of course, I haven't even mentioned the fact that Sterling scored with his first touch of the game. We haven't really seen him in a central role but, in one minute, exploited the space that Coutinho hadn't successfully occupied for the previous 56. Gerrard's direct ball to Suarez's feet was sublime, equally so Sterling's direct run down the center.

While I've lauded his defensive energy in transforming the fortunes of Liverpool's diamond shape, Sterling's immediate goal also seemed to suck the wind out of the Saints' sails. Not a bad second half cameo was it?

While doing the breakdown I found myself marveling at all the different tactical shapes and strategies Rodgers has used this year. From the 4-2-3-1/4-2-2-2 to the 3-5-2 to the 4-3-3 and now a 4-3-1-2, it's been fascinating to watch a supposed 4-3-3 tiki-taka ideologue chop and change not just the shape but also the strategy from week to week.

The Reds were a bit fortunate to escape St. Mary's with a clean sheet, but the performance after Sterling's introduction was exceptional and shows the 4-3-1-2 may have a future. Allen and Henderson are well-suited to the shuttling roles and the advantages of playing SAS in a partnership need no explanation.

Also, Southampton are a fun crew to watch for the neutrals, hopefully LFC can buy all their homegrown players this summer.