Talking in great detail about the incompetency of Roberto Soldado and outlining some other Bests and Worsts from Liverpool's 4-0 home win over Spurs.

Share All sharing options for: Best/Worst of Liverpool v. Tottenham

There are lots of players who are worthy of MOTM, but I'll go with Hendo because of how he kept Tottenham locked into their own half. He made himself into an absolute pest defensively, routinely killing off counterattacks before they could really develop. Sure, you can nitpick and complain about the one glaring miss he had, but he also scored a goal and set the tempo for the match. It's nice to see Hendo bounce back from misses with his head up, which wouldn't have happened a couple of years ago. Undoubtably there's going to be some disagreement with this MOTM, simply because the entire team was so excellent, so I'm interested to hear other perspectives.

Moses predictably did little of note after one forward burst early in his appearance. I wouldn't be surprised if that's the last of Moses we see in a Liverpool shirt. Farewell, we won't miss you.

I went on all game about how poor Soldado was, and in case that didn't convince you, here's some visual evidence. 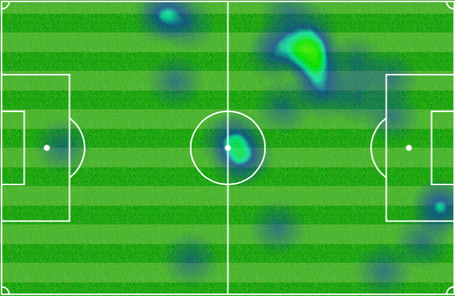 Some of the humor in this heat map comes from the general ineptitude of Tottenham, but it's still troublesome that a supposed poacher like Soldado sat withdrawn on the left wing pretty much the whole game. It's also funny that one of his most highly occupied spots is the center circle where he retreated after each of Liverpool's four goals. 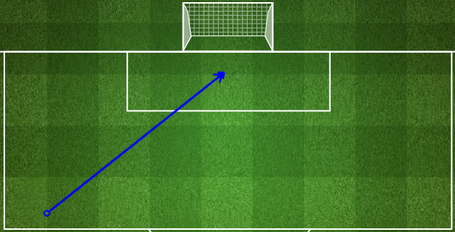 Here's another indictment of Soldado's poor play, as he managed just one shot all match. Again, this comes with the caveat that his whole team struggled and he didn't have much service, but you can't expect service when you're movement is terrible. 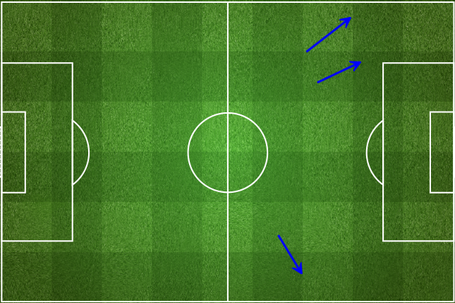 Coutinho scored a surprisingly well taken goal to put the game to bed after struggling with his shooting accuracy for much of the year. On the right side of the box, he drilled his shot low and hard to the bottom left corner past Hugo Lloris who stood no chance.

Hendo shot horribly over the bar with Lloris out of position, but he made amends for the error with his free kick goal later on.

Anfield was electric throughout, but for the players, the greeting they received when they trotted out of the tunnel must have been especially magical. I had chills from my couch thousands of miles away.

After holding Spurs in the locker room for 45 minutes, rumors swirled that Shewood had punched a member of his own team. Who that player was changed numerous times, so that in no time it sounded like he'd attacked the entire starting eleven. Funny parody rumors then emerged, such as, "Danny Rose tried to dodge a Sherwood punch, but he couldn't defend it."