Share All sharing options for: Best/Worst From Liverpool v. Southampton

Rather than continue the rather mundane player ratings posts, I've decided to start a Best/Worst of the week segment that allows for more flexibility and creativity. Within this segment, there will still be a man of the match named and a corresponding poll. Feel free to share your thoughts on this new segment and suggest various other Best/Worsts that I can add to the list for next week. Thanks.

While the addition of Sterling changed the game dramatically, it's hard to argue against Suarez for man of the match. He popped up all over the place, made sharp runs, and involved himself in all three of Liverpool's goals. The first one he scored himself, continuing a run when the play looked broken only to have the ball bounce right into his path where he then curled it into the net. Suarez's second contribution was to give Sterling a lay off pass, earning Suarez his 10th assist of the season. Then, in extra time, Suarez made it a goal involvement trifecta by winning a clear penalty which was converted by Gerrard.

As far as bad performances go, this was mild from Coutinho. There was no slashing the ball into his own net or any fatal back passes, but there was still plenty of sloppiness from a player that is supposed to be one of Liverpool's lead attacking sparks. He passed it at a 66% clip, didn't create any chances, and took only one shot which was shanked woefully off target.

The finish itself wasn't spectacular, but the build up made the goal special. In only a few touches the ball traveled from a deep lying Gerrard to the back of the net. The run from Suarez was great, and so too was the short pass to give Sterling his chance.

As I'll discuss later on in this post, Lallana was very good, but it's perplexing that he managed hit the post from such a perfect scoring angle after being set up by the chest of Rickie Lambert in the area.

You could make a case that the following ten minutes for Liverpool were actually better, but since none of the chances created then led to goals I have to go with this stretch as the best. Sterling scored in the 58th minute, and then Liverpool put a cap on Southampton's attempts to fight right back as the Reds maintained a steady grip on the game.

Yes, I realize I'm cheating and using an 11 minute stretch. Close enough. Those 11 minutes were downright scary for Liverpool fans, beginning with Adam Lallana striking the post and concluding with a fabulous save from Mignolet on a shot from Jay Rodriguez. I'm still not sure how the Saints didn't score over that time with Liverpool's midfield nonexistent and their defense scrambling.

Bringing Sterling on changed the match entirely, and in a mere minute Liverpool went from just hanging on to coasting to victory. The substitution by Rodgers injected Liverpool with new energy, and not starting Sterling in the first place allowed the youngster some valuable rest.

Lallana caused a bunch of problems for Liverpool in the first half, and even though he missed his big chance, his overall performance was impressive. His passing and chance creation in the final third was especially noteworthy, as demonstrated in his final third pass chart: 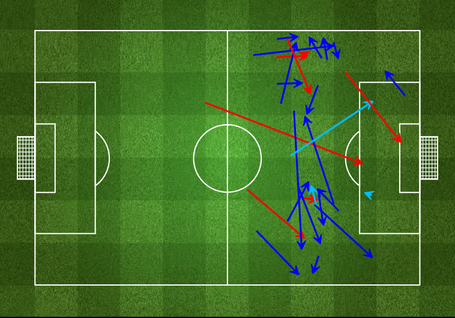 Lallana created three chances and completed almost all of his short to medium passes in the final third, taking advantage of the open space behind Liverpool's midfield in the first half. Lallana expertly passed the ball to the wide areas, then received the ball back as he made runs through the middle. This is exemplified in his ball received chart: 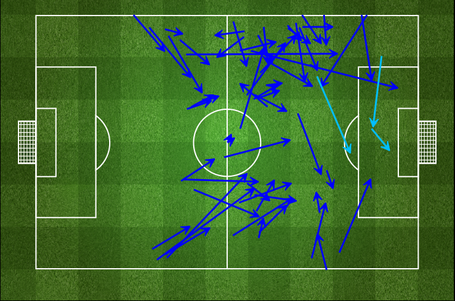 Lallana's intelligent runs caused him to receive three chances of his own in addition to the three he created for others. He was extremely active, leading Southampton's exploitation of Liverpool throughout the first half.

Wanyama gave Liverpool fans a thorough scare when he went nastily through the back of Suarez, causing the Uruguayan to limp around gingerly. Wanyama received a yellow for the offense, and then almost talked himself into a red with an oddly enraged reaction to the call. Luckily Suarez was more than okay, earning a penalty about five minutes later.