TT: Shine on You Sensible Diamond and an Obit for David Moyes

Welcome to Tactics Tuesday, where we are firmly Pro-Moyes.

Share All sharing options for: TT: Shine on You Sensible Diamond and an Obit for David Moyes

There have been games down the years where the old adage "form counts for nothing in the derby" has rung true - Sunday was not one of those days.  As downright Hodgsonian as United has looked this season some, including yours truly, wondered whether a visit from the Reds would finally ignite the Devils into giving the home supporters something to cheer about.  Instead, Liverpool walked into the Lion's den, put the old bastard out of its misery, and used the pelt as décor for its new summer-time cottage quaintly named the "Theatre of Dreams."  3-0 Liverpool, it could have been five, and David Moyes Is A Football Genius.

With last weekend off and no cup competitions, the Reds have spent the time since Southampton returning healthy bodies.  Mamadou Sakho and Lucas rejoined the 18, but the only switch from the previous 3-0 victory was Raheem Sterling picking up where he left off, meaning Philippe Coutinho dropped to the bench. (Brief aside, Coutinho, Sakho, Lucas on the bench? What team is this and what happened to Jordan Rossiter?)

At the back, Simon Mignolet wore purple with Martin Skrtel and Daniel Agger the center back pairing.  Interestingly, Rodgers switched Jon Flanagan and Glen Johnson, with the latter returning to the right side and the former continuing to earn many votes as Liverpool's breakout performer of 2013/2014.  The diamond shape continued in midfield with Steven Gerrard as the anchor, Sterling at the point, Joe Allen left, and Jordan Henderson right.  Up top, you've heard of Luis Suarez and Daniel Sturridge. 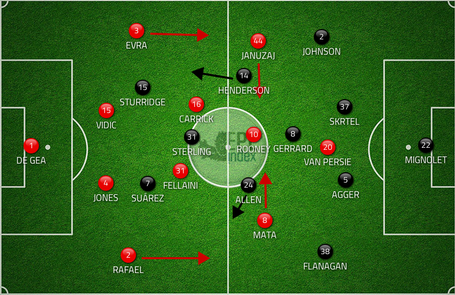 On the wrong side, I was desperate for one last frying of the Rio Ferdinand-Nemanja Vidic rotisserie, but Phil Jones partnered the Serbian with Rafael and Patrice Evra rounding out the back four in front of David de Gea.  Further ahead, I'm sure Michael Carrick wishes Marouane Fellaini would just go paint with Bob Ross.  Meanwhile, the attacking band of Adnan Januzaj, Wayne Rooney, and Juan Mata provided no service of note to striker Robin van Persie.

In what was a tough day for color commentary, Tim Howard's monotone mumbling began by noting Liverpool's new diamond formation and how it would have thrown off Moyes's (supposed) preparation.  Of course, the diamond had already debuted against Southampton and the sterner test provided by the Saints undoubtedly aided Liverpool against what proved to be weaker opposition.

The real issue for United is that the club doesn't suffer from a lack of attacking talent.  Say what you will about a defense in need of an overhaul, but when your front four includes Rooney, Mata, and Van Persie (Januzaj's a keeper but obviously not as accomplished as the others) putting the ball in the back of the net should, on paper, be an achievable task.  Of course, that's only on paper and United's struggles to score against decent opposition is a reflection of no cohesion or chemistry whatsoever amongst the attacking corps.

Whereas Southampton's front three of Jay Rodriguez, Rickie Lambert, and Adam Lallana caused Liverpool all sorts of problems by creating space through clever movement.  On Sunday, Mignolet was only forced into a solitary save and spent the remainder of the 90 minutes sun-bathing, I can't remember a more comfortable defensive performance at Old Trafford.

Despite starting out on the right wing, Mata roamed pretty much everywhere but the right wing itself - dropping deep, cutting inside, heading over to the left flank.  In a similar vein, Rooney moved out of his #10 station, often deep and/or left as well.  The problem with this is that Liverpool has never been better equipped to cope with midfield numbers and, as mentioned, Southampton's genuine fluidity was an excellent trial by fire of Liverpool's new shape.  In contrast, United's attacking spacing was horrific, with Rooney and Mata essentially crowding out Januzaj from his position. 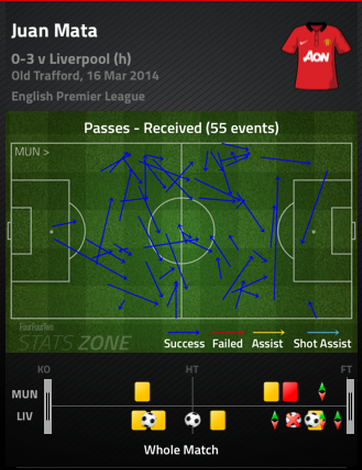 Rooney and Mata traded possession frequently (Mata to Rooney 13 times, Rooney to Mata 9 times) but almost all of this interplay came in the middle third of the pitch, with two banks of Liverpool defenders behind the ball and congesting the central zone.  This made it very difficult for United to complete vertical passes in the final third, with Van Persie only recording 27 touches - the fewest of any starter on either side.  Of United's two chief creators, only Rooney had some measure of success (and limited at that) in linking up with the former Gooner. 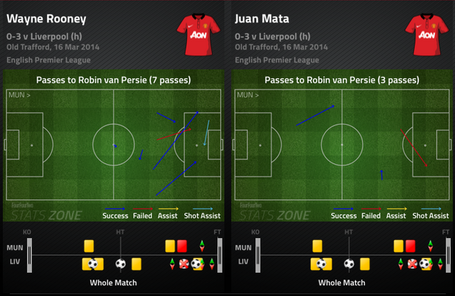 Steven Gerrard's defensive performance has been justly lauded (I'll direct you to Dan's piece yesterday for a closer inspection) but we shouldn't overlook the efforts of Agger and Skrtel.  On the heels of being substituted at St. Mary's and with Sakho's mohawk glistening on the bench, Agger really needed a decent showing if he wanted to keep a starting berth down the final stretch.  Rather than look at tackles, interceptions, etc., I thought the duo's positioning was inch-perfect and the best visual representation, in my mind, is looking at Rooney and RVP's shot charts. 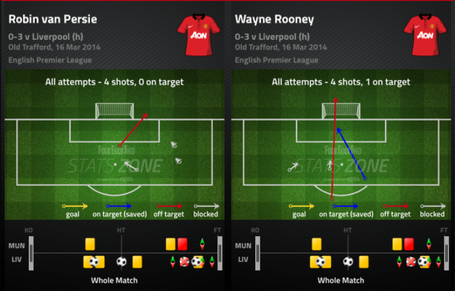 While all of Van Persie's four shots came inside the area, three of them were blocked and while three of Rooney's four cracks came inside the area, two of these were blocked as well.  In short, even when Van Persie and Rooney did get the ball in dangerous positions, there were Liverpool defenders nipping at their heels to deny them a clear look at goal.

What I found most amusing was that Moyes picked the wrong time to try and emphasize intricate final third passing as his attacking strategy.  All season he's been criticized for essentially attempting to implement the rudimentary "get the ball down the flanks, fire it into the area" approach he used at Everton.

Now, when faced with an opposition congesting the middle zone outside the 18 and conceding acres of space down the flanks, he directs his team to try and patiently work through Liverpool's defense.  As a team, United attempted 18 crosses, a full ten fewer than the Red Devil's league-leading average of 28, during a game in which quality service from wide areas would have helped unsettle Liverpool's defense and, potentially, open up space in the middle.

With Mata and Rooney roaming (and Januzaj ghosting) across the field, United's full backs saw plenty of the ball -Rafael led United with 82 touches, Evra recorded 73 himself.  While the Frenchman knocked in five crosses (one successful), his South American colleague only attempted two despite his incredibly advanced positioning on the essentially barren right flank.  Part of this is down to an exceptionally aggressive performance by Flanagan.  The Merseysider's eleven tackles, six clearances, and two interceptions are very impressive in hindsight, but made for an edge-of-the-seat viewing experience ("Don't...Don't...Okay good job!") after his early yellow card.

Obviously, Vidic has lifted a decent assortment of silverware since joining United in 2006, but I think it's fair to say that Liverpool fans will be sad to see him go.  It seems like just yesterday we were watching Fernando Torres take him down the channels and it was literally almost yesterday when we watched Daniel Sturridge and Luis Suarez gleefully take turns doing the same.  Indeed, Liverpool's offensive impetus was largely directed down the right side and largely aimed around exploding every fiber in Vidic's creaking hamstrings.

Building from the back, you can see how Liverpool's entire attacking structure was pulled forward on the right hand side.  Start by comparing the respective passes received charts of Johnson and Flanagan. 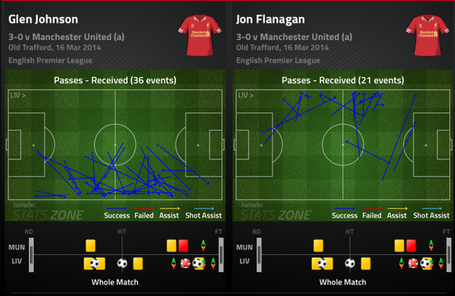 Continue it with the same charts for the diamond's "shuttling" midfielders, Henderson on the right and Allen on the left. 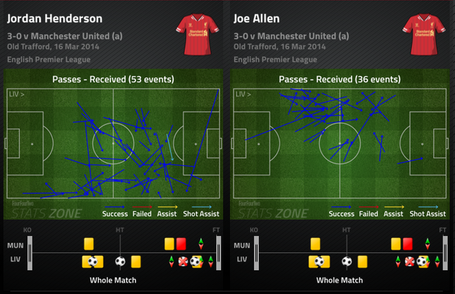 And finish it with a look at those of Sturridge and Suarez.  Liverpool ostensibly lined up with Sturridge matched up against Vidic and Suarez against Jones, this makes sound logic in that Rodgers matched his fastest striker against the slow defender and his trickiest striker against the inexperienced defender.  Although Suarez did spend more time in the left channel than Sturridge, you can also see that he had his fair share of fun running at and around the lumbering Vidic. 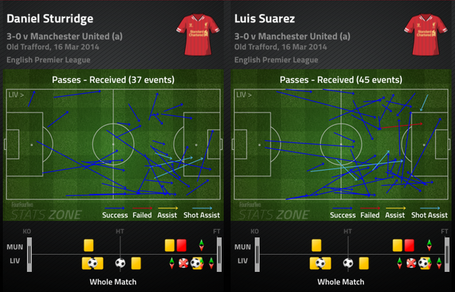 Obviously, Liverpool's first two goals came from penalties and the pessimists can acknowledge that SAS wasn't at its sharpest (Suarez 2/5 shots, Sturridge 0/3), nor was Sterling much of a factor in the final third (no key passes, no shots).  What we did see brought to life however, was the concept that penalties are merely a reflection of offensive pressure (a familiar idea to those of you who've read "Soccernomics," a kick up the behind to those who haven't).

Liverpool's final touch from open play may not have been the most clinical we've seen this year, but the Reds consistently worked themselves into dangerous positions that unsettled United's defense.  As an example, Sturridge may have sent his early opportunity wide but notice Jones scrambling to cover and sliding to disrupt the striker's effort.  Repeatedly putting the home defenders into isolated or last-ditch challenges eventually reaped rewards with Rafael's handball, Jones's shove on Allen, and Vidic's lunge/Sturridge's dive.

To bring us full circle, the catalyst behind Liverpool's goals both this game and over the season has been the relationship between Suarez and Sturridge.  When compared to United's inability to put Robin Van Persie in dangerous positions, the interplay between the two Liverpool strikers show a genuine partnership with a developed understanding of how to find and create space for each other.  Suarez playing Sturridge in behind, Sturridge switching play when Suarez was in space. 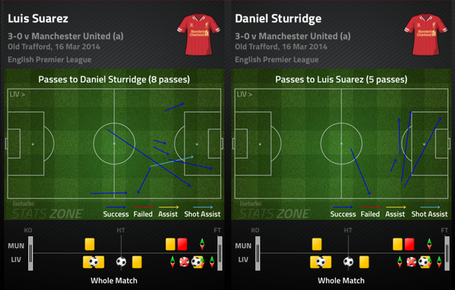 Conclusions and an Early Obituary for David Moyes

If this game wasn't a ringing endorsement of the work done by Brendan Rodgers and equally damning indictment of the job done by David Moyes, then I don't know what is.  On one side, you have a tactically flexible manager who has filled his team with confidence and cultivated a telekinetic partnership between two strikers labeled "insane" and "selfish" at previous moments in time.  Rodgers has been given stick for liking to talk the talk, but when your team walks like his...well you can say whatever you want really.

On the other side, this loss seemed to confirm a definite shift in the winds around Old Trafford.  Patience has been stamped with an expiration date and the old, rust-coated guillotine has been dragged out of a Carrington supply closet to be massaged with WD-40.  It's not the end yet, but it certainly feels like the beginning of the end.

From this distance, it seems as though it took Moyes about six months to realize his cautious, reactive tactics may be suitable for mid-table purgatory, but not at a club with the ambitions and pedigree of United.  Yet, although the Scot has tried to adjust and install a more progressive style based upon fluid interplay, he has been totally unable to pull it off - despite clearly having the horses with which to do it.  And I think it is this last point that will cost Moyes his job.

The real reason Liverpool fans feel such an enmity toward Roy Hodgson isn't just that he was a tactical Neanderthal (and overall bumbling jackass and...), it's that he still genuinely believes that his methods were the right ones.  I could be wrong, but I think if Hodgson were willing (or even capable, I suppose) to acknowledge that his tactics and persona were a poor fit at Liverpool, the simmering resentment felt on both sides would reside.

To his credit, Moyes has seemingly recognized that he's the one who needs to adapt to the club, not the other way around.  Yet, it's increasingly looking like this dog is too old to learn new tricks.  Should United and Old Man Ferguson really be determined to find the answer to this question, they'd have to be willing to bet a hundred million pounds on it over the summer.  Based on the evidence at hand, that's a wager I doubt they're willing to make.