Continuing the series as we digest Liverpool's 3-0 win over United.

Share All sharing options for: Best/Worst From Liverpool v. United

It's hard to pick from the four starting midfielders since they were all magnificent, but I'll give MOTM to the captain, and not only for the brace he scored. I thought Gerrard covered a ton of ground tracking back to harass United's attempted attacks. 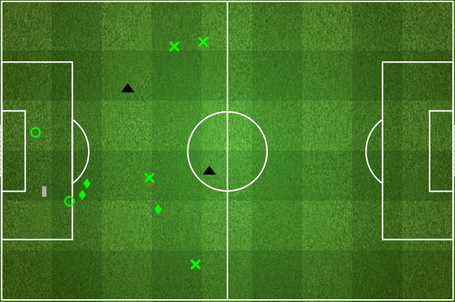 The defensive activity map agrees with my assertion, as Gerrard blocked a shot, made two successful clearances, intercepted the ball three times, and won four tackles. His events are all over the pitch, a reflection of his mobility and strong positioning. 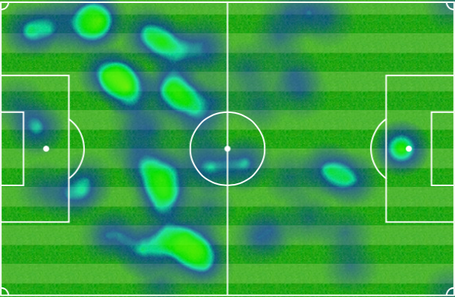 On another note about positioning, Gerrard has never been known as the most spatially aware player because of his meandering forays into the opposition half. Against United however, the heat map shows how he patiently stayed back, covering almost every piece of grass between the halfway line and the edge of his own area.

Gerrard calmly staked Liverpool to a two goal advantage from the penalty spot, and his defensive work impeded United from creating chances of their own. The theory that Gerrard finds another gear in big games held true, and hopefully the crazy-eyed competitor will continue his good form as his team chases a title dream.

Honorable mention for MOTM goes to Raheem Sterling and Joe Allen who were also brilliant.

Liverpool weren't at their best, yet no single player was especially poor. Relative to the rest of the team, Daniel Sturridge and John Flanagan were probably the worst, but both players had their bright spots. For Sturridge, the problem was shooting quality, and for Flanno it was a bit of recklessness early on that caused Mark Clattenburg to show him a yellow card.

The penalties were nice, but those are always way more likely to go in than chances from open play. Suarez's goal won't be on any yearly highlight reels, but it was nice and tidy, clinching his team's victory.

With one of United's only chances, van Persie headed horribly wide from an open position in the center of the box after Rooney crossed it with precision onto the Dutch center-forward's cranium.

Rodgers made many good decisions including his choice of formation, but I'll leave that up to Matt to discuss on TT and instead talk about the inclusion of Allen in the starting eleven. The choice was mainly between Allen and Coutinho, and unlike at previous junctures this year, Rodgers went with the more defensive minded bet. Allen justified his selection not only through his willingness to play defense, but also because he continued his recent trend of venturing forward. Quietly Allen is becoming quite the little player, and this performance starkly contrasts his disaster at Old Trafford last year.

United were pretty terrible, but they did have one glittering moment when David de Gea produced a top class save to deny Luis Suarez, who's shot came after he flicked the ball over his marker's head.

Sturridge dove to win a penalty, and I wish he hadn't done that. Moving on, when knocked over by Flanno in the second half, Rafael proceeded to flail around like a dying fish. Of course, most modern footballers do the same thing when they go to ground, but Rafael's antics should be pointed out since he's generally an annoying player.

Unlike Howard Webb in the FA Cup match against Arsenal, Clattenburg wasn't scared of pointing to the spot more than once. He did so three times in fact, but then couldn't bring himself to do it on a fourth occasion when Sturridge was taken down.

Still not sure how Rafael stayed on the pitch with only a yellow after the handball in the box and a few cynical challenges. It evens out the Vidic sending off, however.

I could not believe my eyes when I saw that Tim Howard, a current Everton player, would be calling the Liverpool-Manchester United game. There's no reason for NBC to employ Howard, especially not for the biggest matches. He wasn't as bad as I expected, but I'd rather have an actual commentator commentating on Liverpool games.

Then there was the downright weird Progressive thing. Apparently extra time is now sponsored? How can you sponsor time? It makes no sense.

Anyways, vote on your MOTM and discuss your opinions in the comments.