Share All sharing options for: TT: The Defense Rests as Reds Out-Score Swans 4-3

It was another three points on the weekend as the Reds beat Swansea 4-3 in a contest that jacked up Kopite heart rates and seemed almost hand-written for Match of the Day highlights. The Reds were brilliant in attack on the day, this is news to no one. As such, I think it prudent to focus more on the Reds' continued defensive problems which, in this match, occurred through both mental errors and poor overall structure.

Brendan Rodgers kept the same shape he's been using over the past month or so, but was able to give starts to injury-returnees Glen Johnson and Daniel Agger who comprised the left side of defense. Martin Skrtel and Jon Flanagan filled out the rest of the back four in front of goalkeeper Simon Mignolet. 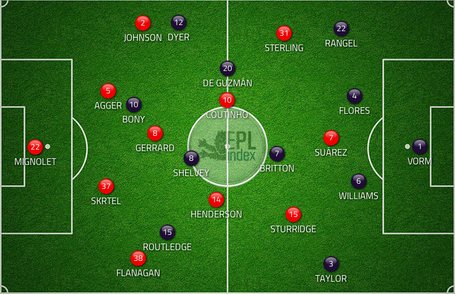 Over in the wrong dugout, "manager for the foreseeable future" Garry Monk didn't spring too many surprises. Dutchman Michel Vorm continued in net. He was protected by Angel Rangel, Chico Flores, Ashley Williams, and Neil Taylor - the left back replacing Ben Davies after Swansea's Thursday Europa League tie against Napoli. In midfield, Leon Britton anchored while Jonathan De Guzmán and Jonjo Shelvey played further ahead. Wayne Routledge and Nathan Dyer manned the flanks, while Wilfried Bony played as the lone striker.

In Liverpool's last five league games, Arsenal and Everton combined for one goal, while West Brom, Fulham, and Swansea have combined for six.

You'll remember in the former two matches, the Reds sat deeper, kept a disciplined shape, and broke directly when in possession. In the latter three, the Reds have been tasked with dictating the pace of the game and, consequently, have pressed higher up the field and been more fluid in attack.

It's fair for Rodgers to lament individual errors in all three fixtures (Toure against WBA, Toure and Skrtel against Fulham, Skrtel twice against Swansea), but the midfield fluidity that provides such a cutting edge in attack can oftentimes expose a defensive corps that is perpetually in flux and holds an appetite for self-destruction.

To wit, let's look at the third minute of the match. Henderson has closed down Britton in possession and Coutinho is stuck tight to De Guzman, Gerrard is at the half-way line and completes Liverpool's midfield triangle. There's not really too much wrong with this picture either in terms of shape or midfield structure.

But, when Chico Flores by-passes this congested section of the pitch and plays a ball to the feet of Wilfried Bony, you suddenly see acres of space between Liverpool's lines and Gerrard scrambling to recover. The back four is not sufficiently squeezing play and is, essentially, undermining the work of the midfield group. Bony had one of his best overall performances since moving to Wales, with much of it coming by dropping deep and away from Daniel Agger into this zone. 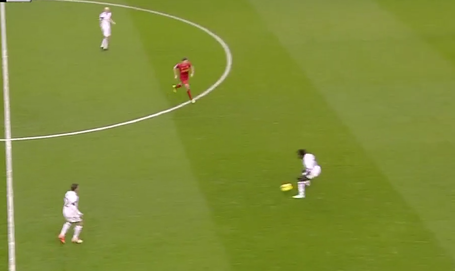 Liverpool actually ended up scoring soon after, with Sterling robbing Rangel and playing an inch-perfect through ball on the outside of his boot for a Sturridge finish. Regardless, had these pictures been taken in the middle of the previous decade, a certain Spaniard would have gone totally and completely apeshit. Rodgers can rightly point to individual errors, but he has to shoulder some of the burden for his midfield and defense not being in sync.

Indeed, Shelvey's opener came not through poor positioning by the back line, but a lapse in concentration by Henderson. Having just scored Liverpool's second, here Hendo has dropped deep to cover for Flanagan who had chased Routledge infield. Unfortunately, while Flanagan recovered, Hendo fell asleep and is essentially in no man's land when the ball is played across the danger zone just outside Liverpool's area. Shelvey's technique was superb, but allowing this kind of space just won't cut it.

I found it fascinating that while Skrtel was the culprit for two of Swansea's goals and Rodgers's post-game ruing centered upon "individual errors, not coaching," it was Agger who was lifted at 63 minutes for Kolo Toure. Rodgers said he wanted someone who would "battle" the striker and, based upon Bony's impressive hold-up performance, it's not hard to see why. 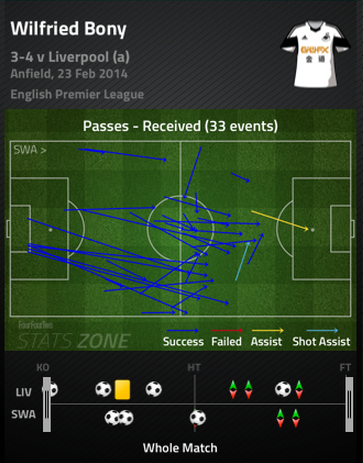 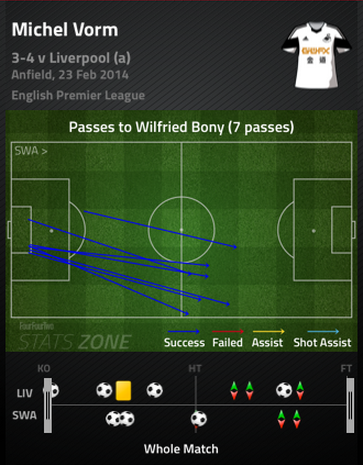 Almost all of Bony's action came in the center-right zone where he exploited the gaps between Liverpool's lines. Further, he was most frequently passed to by Vorm and all of them came to Agger's side of the pitch. Yet, I'm still unsure if all of this can be simply pinned on the vice captain, as the Reds' entire back four was playing too deep.

For evidence here, look at these two frames from the 43 minute mark. 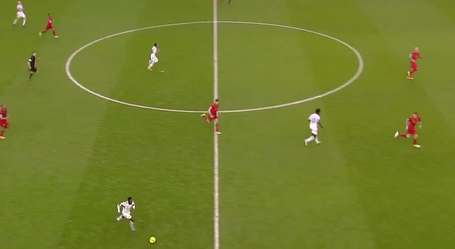 In this first shot, Liverpool have essentially repeated the failings of Arsenal at Anfield several weeks ago. The full backs are high up the pitch and Gerrard is scrambling to close down Dyer's break through the channel.

The winger is eventually cornered by the Captain and Dyer plays a ball into the feet of Bony - who has pulled up into Gerrard's vacated zone in front of the back four. Obviously, Bony can't just be allowed to sit on the ball in this zone, but it's hard to really blame Agger. Should he aggressively close down the striker, Routledge could and should make a simple diagonal run across the face of Skrtel and he'll be in on goal. It's a rock and a hard place for the Dane and I don't think he asked to be put there.

(As an aside, it's not hard to imagine a totally different score line had Michu been available for Swansea. The Spaniard absolutely thrives at reading space and his intelligent support runs would have been the perfect foil for Bony's dropping into space.)

Regardless, having re-watched the game it actually becomes clear when Rodgers decides he can't continue with Agger. At the 59 minute mark, the manager removed Sterling for Joe Allen and reshuffled the Reds into a 4-2-2-2 that provided a bit more structure in midfield.

Soon after, a sloppy Johnson back pass finds its way to the feet of Bony. Now Agger does immediately close him down, but the striker merely pins Agger to his back and rolls an excellent back-heel to the feet of a streaking De Guzman. The midfielder's shot is snuffed out by Mignolet, but Agger is almost immediately thereafter replaced by Toure. 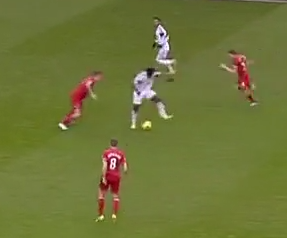 So, that is the only (limited) evidence we have of Agger in the more balanced system to which Liverpool shifted after Allen's introduction. Regardless of whether it was fair (or even genuinely intentional) to finger Agger as the culprit of Liverpool's defensive issues from open play, the new-look tactical battle definitely favored the Reds. 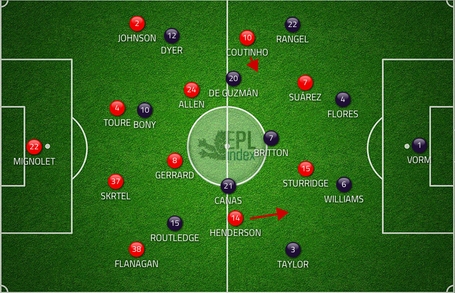 From the 63' minute mark forward, Liverpool only conceded two shots (compared to 12 before) and the closest Swansea came to truly threatening Mignolet's goal was when a bundled clearance almost resulted in another own goal. Going the other way, Liverpool recorded eight shots in this same time frame (13 before), with five on target and Henderson's winning goal.

(This was also an interesting comparison between a teams who rested versus competed midweek. Surely, Swansea's Thursday match against Napoli took a toll in the second half, and seemed to be a factor in Shelvey's half-time removal.)

I think the best visual to bring us full-circle on this point is a frame just before the Toure introduction on 63 minutes. Again, Chico Flores is in possession and, again, Coutinho and Henderson are closing down in midfield. Yet, where Flores had before been allowed the time to pick around Gerrard in the first half, here he is closed down by Allen who has given the Reds another body in the middle of the park. It's one of Allen's five tackles in his second-half cameo, and he almost got Sturridge a hat-trick after gaining possession here.

Breaking this game down was a bit trickier than most. Liverpool's entire defensive work was poor and resulted in a very open game, yet the Swans only scored once from open play and their last two were the result of isolated mental errors. Rodgers should certainly be angered at the ongoing individual lapses, but he needs to shoulder some of the blame for the reckless openness of the contest's first hour.

Finding the right balance between fluid attacking play and sound defensive structure is a fine line to toe. Considering how unsettled the defense currently is, Rodgers will need to be wary of leaving the back-line so exposed while pressing higher up the pitch. It led to some incredible attacking play, of course, with Sturridge's second my current "Goal of the Season" due to the remarkable interplay in the build up.

In the bigger picture, it was a bit interesting to compare the post-game reaction to that of the Fulham match. The last gasp victory at Craven Cottage received the qualified praise of "we showed great character, but need to cut out mistakes." This one largely garnered "we need to improve and we need to do it right now" annoyance.

Frustrations at the on-going defensive problems to be sure, but it's also a positive reflection of the raised expectations surrounding the club at this point in the season. 11 games left and a smaller point-gap to the top of the table than to fifth place, Liverpool is playing meaningful spring fixtures for the first time in several years. Should Rodgers turn the defense from Swiss cheese to Pepperjack, the Reds may find themselves climbing even higher up the table.