The taste of hipster tears never really gets old. So go pour yourself another glass of Williamsburg's Finest, as we break down Liverpool's comprehensive victory over Arsenal.

Frankly, if that title didn't have enough alliteration for you, then I'm all out of answers. Down to business then.

In short, A = B and B = C therefore, A=C. The full story, Liverpool's eleven remains unchanged from both the triumphant victory over Everton and the "lost draw" against West Brom. Such is the price of a failed transfer window and rampant injury virus, though a full week of rest meant the squad had some spring in its step. 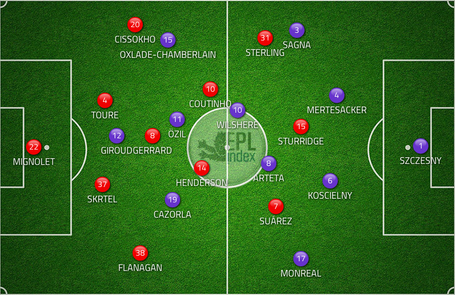 On the opposite side, Ratatouille sent out Bacary Sagna, Per Mertesacker, Laurent Koscielny, and Natxo Monreal (right to left), leaving goalkeeper Wojciech Szczesny waiting for the wolves covered in sheep's blood. In midfield, Mikel Arteta and Jack Wilshere played behind the attacking band of Alex Oxlade-Chamberlain, Mesut Ozil, and Santi Cazorla. Up top, Olivier Giroud continued to draw more plaudits for his hair than goal-scoring ability.

The Mertesacker-Koscielny partnership has treated Arsenal so well for much of the season, with the Frenchman tightly marking strikers into midfield and his German colleague covering behind. It's a testament to Mertesacker's intelligence that this combination has succeeded because there are senior citizens doing laps in shopping malls who are sprightlier on the turn. To wit, here's Liverpool's first play of the match - leading to Skrtel's finish from a Gerrard free-kick. 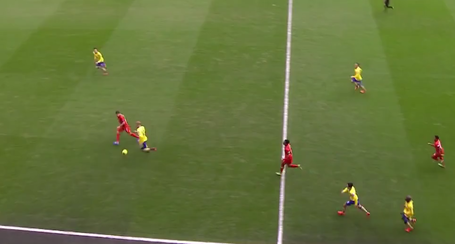 Now, long throw-ins aren't a system (unless you're Tony Pulis) and Mertesacker's ensuing foul was needless - Koscielny had him covered and Suarez was isolated to begin with - but the German's lack of mobility had Arsenal down 1-0 before people found their seats.

Though the first goal was mere evidence of an existing weakness, the ensuing onslaught was a result of Rodgers tweaking his new 4-3-3 shape to systematically exploit it. They've traded places to some extent, but it has largely been Sturridge in the "narrow-wide" role he played to such great effect against Everton. In this match however, it was Suarez shunted out wide and this time to the right flank, with Sterling moving left. 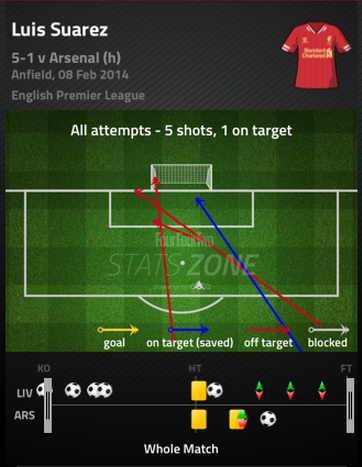 Pushing the planet's in-form goal-scorer out wide was a gutsy move by Rodgers and indeed, it ended up nullifying much of the Gremlin's goal threat from open play. Suarez's shot chart shows just two attempts from inside the area, though he almost caused widespread rioting and looting with a vicious long-range crack off the post. 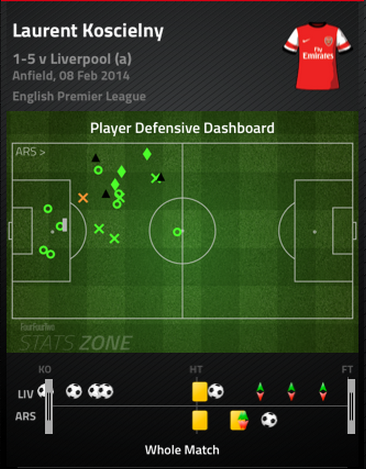 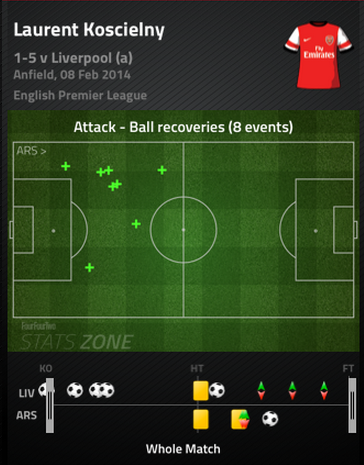 What this move accomplished however, was an exaggeration of Arsenal's usual defensive chemistry. Koscielny had to constantly come deep and to his left in order to track Suarez -- perhaps best encapsulated by his yellow card borne of frustration in the second half. This then left Mertesacker to contend with the combined pace of Daniel Sturridge down the center and Raheem Sterling in the channel behind. 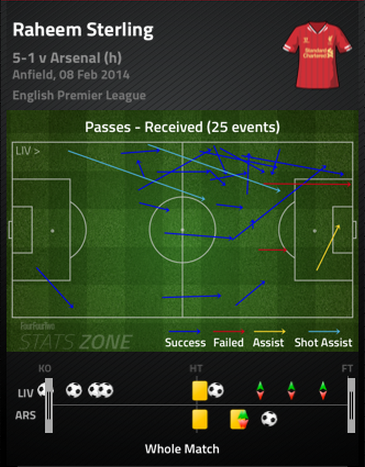 As I mentioned in the Everton breakdown, Sterling's direct diagonal runs are becoming vital to Liverpool, and Rodgers's post-match gushing suggest he's thrilled with the winger's development.

Sticking with the Everton match, the continuation here is the away side's determination in getting full-backs forward to provide attacking width. While helping to control possession, the obvious drawback is that it leaves the side susceptible to direct balls into the channels on the break. Though Liverpool ripped Everton for four and bagged five against Arsenal, on Saturday they easily could have had six or seven goals in the first 45 minutes alone.

The reason for this is that Arsenal combine advanced fullbacks and exceptional fluidity in midfield, with Mikel Arteta the lone holding player. Roberto Martinez depends upon his midfield duo of Gareth Barry and James McCarthy to stay firmly planted in front of the back four and provide at least some barrier. Arsenal's midfield however, has great freedom to roam from their original stations in an attempt to create gaps in the opposition's defensive structure.

This fluidity begins with record-signing Mesut Ozil, who constantly looks to move out of his advanced-central berth as per his passes received chart below. On this day, the two players who most-often looked to move into this space were Santi Cazorla, cutting in from the left, and Jack Wilshere, motoring forward from his deeper spot alongside Arteta. 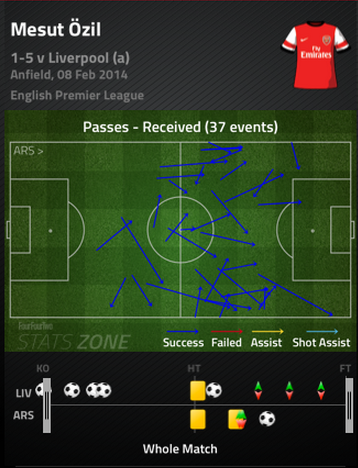 The problem for Arsenal was that Steven Gerrard put in, what I would argue to be, his best showing yet in his new defensive midfield role. Rather than look to his defensive stats (seven tackles, two interceptions, and nine recoveries), the effectiveness of Gerrard's positional discipline in front of the back four is best emphasized by Arsenal's final third passing chart. 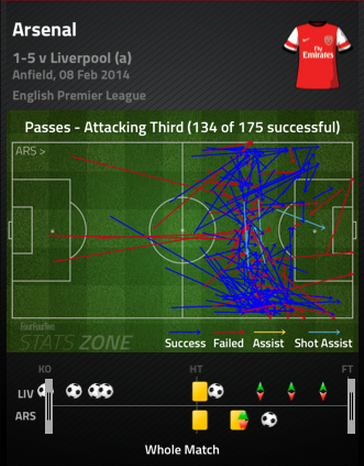 I had doubted Gerrard's ability to stay home in this role, but the window of space in front of Liverpool's penalty area is totally down to "Stevie Me" making the role his own. Arsenal's inability to crack this zone meant they rarely tested Simon Mignolet in net. The Captain's impetuous penalty concession was the only blemish on a sparkling defensive performance and dead-ball clinic, taboot.

It is also worth noting that in addition to moving Sterling left, Rodgers flipped Coutinho and Jordan Henderson - significant to the balance of the system. Henderson's incredible energy and stamina was crucial on the same side as the committed, but narrow Suarez.

What are Goals, Alex.

What happens when you combine rapid attacking transitions with solid defensive structure? 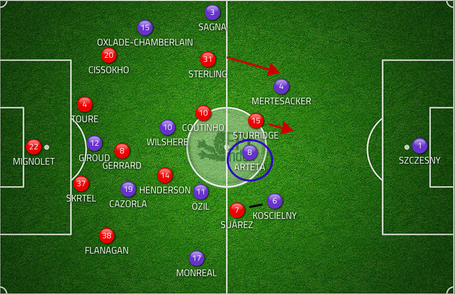 The combined effect of Rodgers's offensive and defensive strategies was Liverpool often gaining possession with the above field configuration. Koscielny snug to Suarez and the fullbacks' advanced positioning leaving the slow-footed Mertesacker and Arteta to contend with the blistering pace of Sturridge and Sterling. Let's go to a five minute stretch of the first half in which Liverpool had no less than three clear goal-scoring chances (four if you include Toure bungling the rebound from Suarez's gravity defying shot).

In the 12th minute, we get a great representation of the above diagram. Ozil has dropped deep to get on the ball, with Wilshere and Cazorla both moving into that advanced-center zone. Jordan Henderson's pressing here is a good embodiment of Liverpool's overall discipline - waiting until the Gunners entered Liverpool's half to close down his midfield opposition. Under duress from Henderson, Ozil forces a pass inside which is intercepted by Gerrard and knocked to the nearby Coutinho in one movement - Bill Russell would have been thrilled. 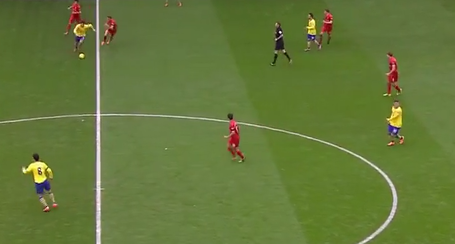 After a touch to settle the ball, Coutinho knocks it forward to Suarez who has been tracked by Koscielny. The defender arrives too late to do much of anything and one-touch from the Gremlin plays in Sturridge, with Mertesacker sucking wind to close him down. Sturridge was a bit hasty in his attempt and his first-time lob of Szczesny sailed wide. Already up 2-0 from set-pieces, this is Liverpool's first warning shot from open play.

Less than one minute later, Rodgers's strategy of isolating Mertesacker once again creates a clear opportunity. With Sterling moving inside to contest a stray ball, Sturridge has peeled into the open space wide left where he receives a neat Sterling knock-down. Now, in what is a magical case of "somebody get a sponge" defending by Wilshere, he merely points out Sterling's direct run, rather than cover it himself. 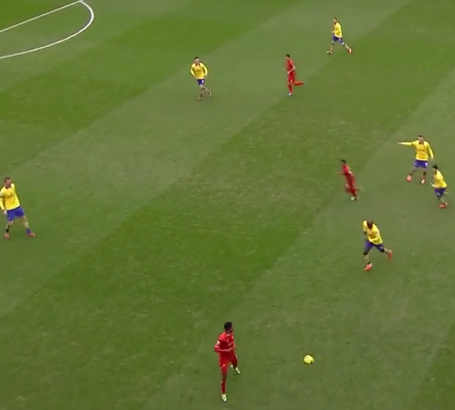 Three minutes later, we arrive at the culmination of Rodgers's strategy from open play. Once again returning to the above diagram, we essentially get a repeat of the action on 12 minutes - Ozil deep with Cazorla and Wilshere central and Monreal remarkably high up the field. This time, Ozil capitulates directly to the ravenous Henderson, who powers forward in possession. 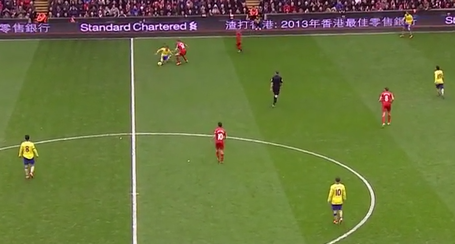 Having started at the half-way line, he is only forced to give up the ball just outside Arsenal's penalty area where Arteta finally got in his path. At this point, we now see Koscielny two steps too late in closing down Suarez. Mertesacker has moved goal-side of Sturridge, but Sagna is a good 10 yards behind Sterling who races to the back post. A pin-point ball by Suarez finds the overload, and Liverpool go up three-nil. 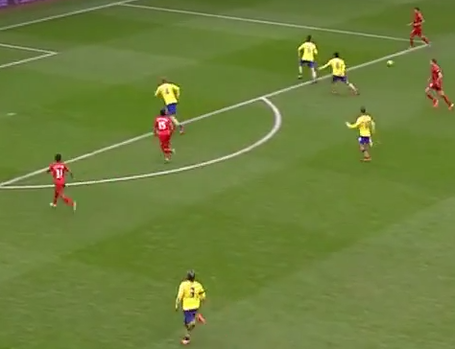 We could, of course, go on. Liverpool's fourth came on just 20 minutes, after Coutinho jumped a lazy Ozil pass intended for Wilshere and proceeded to play the greatest through-ball the world has ever seen to Sturridge. And if we fully detailed Liverpool's fifth we'd literally be beating a dead horse, as Sterling beat Mertesacker in behind before taking two shots to finish past Szczesny.

Well, we only recently found ourselves talking about BR's best performance at Anfield but we now have to raise the bar once more. Perhaps most interesting however, is the "lost draw" that sits in the middle of this delicious sandwich. We have similar game plans against two possession-based sides at Anfield with an absolutely flat performance on short rest away at the Hawthornes. I'm far from a soothsayer, but this pattern may well repeat itself over the remainder of the season.

With as little squad depth as is currently available, "energy" is the new buzzword for those in the Liverbird. At Anfield, against rivals (geographic and/or table-wise), able to let the game come to them? 9-1 cumulative score. On the road, against weak opposition, having to control the game? Well, hopefully Toure won't repeat that awful backpass. 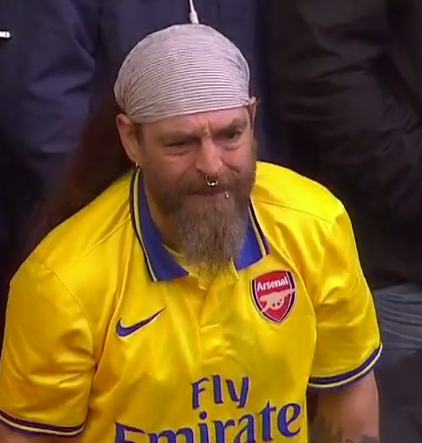 Most important of all however, Steve the Pirate went home unhappy. For that, we're all winners.