TF: S^3 On the Counter Against Everton

Welcome to Tactics... Friday? We've lost the alliteration, but picked up a big derby win. I guess it's a fair trade.

Share All sharing options for: TF: S^3 On the Counter Against Everton

In a miraculous move by the FA, they forced us to endure the Magic of the FA Cup on the weekend and moved the Premier League to mid-week, mid-afternoon for us damn Yankees. I'm sure all the working stiffs would much prefer to catch Liverpool-Bournemouth than the most important league Merseyside derby in recent memory. Rant, concluded.

Rodgers has a full defense unavailable through injury (Agger, Sakho, Johnson, Enrique), so Simon Mignolet was shielded by the default Martin Skrtel - Kolo Toure pairing in central defense. On the flanks, Jon Flanagan was fit enough to start at right back, while Aly Cissokho kept his position on the left. The midfield consisted of Steven Gerrard, Jordan Henderson, and a central Philippe Coutinho. Up front, Luis Suarez and Daniel Sturridge traded responsibilities as the central striker and left attacker, giving Raheem Sterling a permanent right wing station. 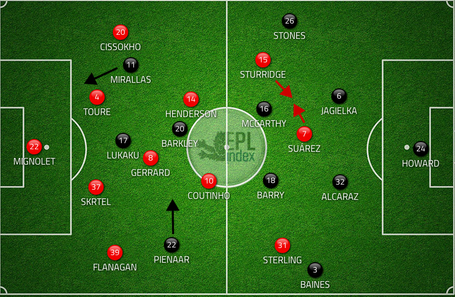 The visitors are an equally beat-up crew at the moment, forcing Roberto Martinez into fielding some half-fit starters. Tim Howard played behind a back four of John Stones (filling in for Seamus Coleman), Phil Jagielka, Antolin Alcaraz (subbing in for the injured Sylvain Distin), and Leighton Baines. Midfield held the double pivot of James McCarthy and Gareth Barry behind attacking midfielder/support striker Ross Barkley. Steven Pienaar played a narrow role on the left, with Kevin Mirallas a more direct "inside forward" on the right. Loan star Romelu Lukaku spearheaded the attack but, like Samson without his hair, the dreadlock-less Belgian took an early injury and needed to be replaced.

The real tactical tale of this match is Liverpool's brilliant counter-attacking performance, so let's split this bad boy up into two parts: Liverpool out of possession and Liverpool in possession.

Most matches, I can break down Liverpool's shape by different areas of the pitch, but this match featured probably the best team defensive effort of the Rodgers era. The Hendo-Gerrard midfield duo had been overrun against Villa and even shown some weakness against Bournemouth, who lacked the quality required to make the Reds pay. Without Lucas and Joe Allen, Rodgers was unable to add a midfield water-carrier so he shifted the formation and changed the philosophy.

Rather than the voracious group-pressing usually seen in Liverpool's best displays, Rodgers had the Red men sit deep and concede both territory and possession to their rivals. It's interesting to realize that while Martinez has Everton playing neat possession football (I'll admit to being surprised how well he's worked that squad), they actually don't have a player who can unlock a packed final third. To point, let's consider Everton's attacking band that played against Liverpool.

In the center, Barkley is an undeniably talented player but much more of a support striker than a playmaker - essentially an athletic volume shooter who likes to dribble past opponents. On the left, Pienaar is a technically gifted "ball-stopper" who likes to cut inside, receive the ball, and take three or four touches before making a decision. For fellow NBA fans, Pienaar is a lot like Rudy Gay - he possesses genuine ability, but plays with his head down so as to drag down his team's offense. Case meet point: Barkley took five shots (four from outside the area), went 5/8 in dribble take-ons, and, along with Pienaar, assisted on zero shots inside Liverpool's penalty area.

On to Mirallas, the diminutive Belgian looks to use his speed and break into space behind the opposition's defense. I imagine he spent Monday night dreaming of sprinting down the right channel 50 yards clear of a day-dreaming Cissokho. Instead, Liverpool's deep line lifted pressure from the on-loan full back and he actually had a competent defensive performance - with four ball recoveries and six tackles. Much like his midfield colleagues, Mirallas struggled to crack the penalty area, with only one of his four shots coming from inside the 18. Upon Pienaar's removal in the second half, Mirallas spent more time on the opposite flank but was similarly stone-walled by the capable Flanagan. 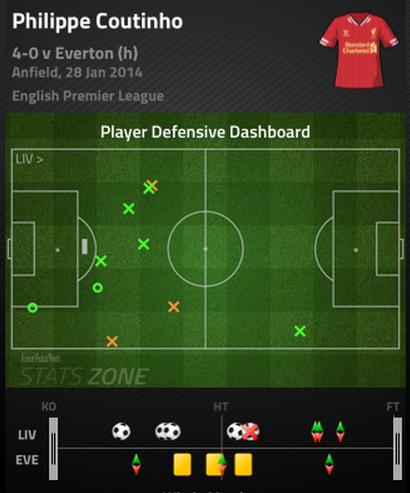 Much of this success comes from Liverpool's fantastic shape without the ball. In creating a counter-attacking side, one could easily argue that a Gerrard-Hendo-Coutinho trio is the weakest for a solid defensive performance - but here it was excellent. The surprise, for me at least, was Phil - P-Funk - Coutinho's stationing as a genuine central midfielder. When the lineups were released, I would have bet my meager bank account on a double pivot of Hendo-Gerrard with Coutinho pushed central and further forward. Instead, he played on the right of a "negative" triangle and performed his defensive tasks with aplomb - to the tune of five tackles, two interceptions, and seven ball recoveries. 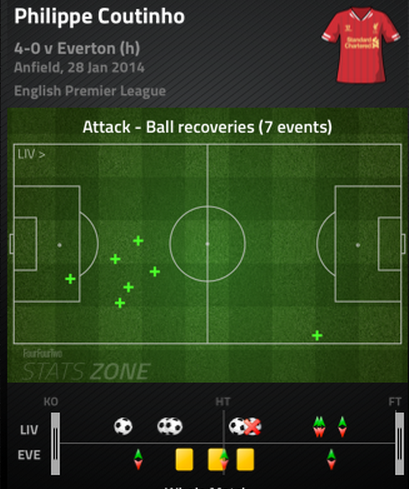 Almost as surprising, Gerrard and Henderson curbed their aggressive instincts and maintained their positional discipline. At one point, Suarez could be seen throwing a tantrum at Henderson for not joining him in closing down Jagielka and Alcaraz. On a different day he would have been right, but here Henderson burst two strides forward before remembering his task and, correctly, retreating. 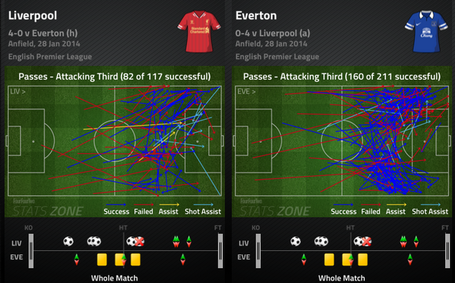 It must be acknowledged that this strategy received a major boost with Lukaku's withdrawal after 20 minutes and subsequent replacement by Steven Naismith. Naismith recorded zero shots in his 70-plus minutes, but his failure at aerial duels, just one for six, better sums up this story. As Liverpool denied them entry into the penalty area, Everton could have looked to the air in order to exploit Toure's struggles against physical strikers - impossible without their massive target man. Everton full backs John Stones and Leighton Baines completed just one of eight crosses despite their incredibly advanced positioning. 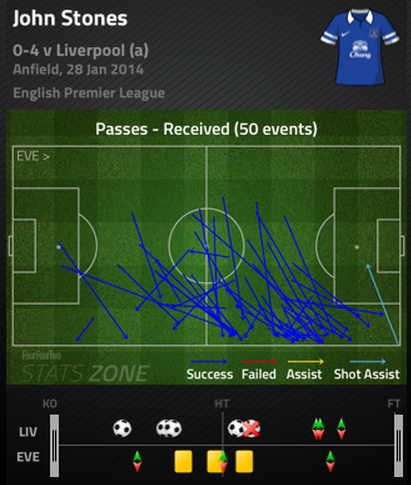 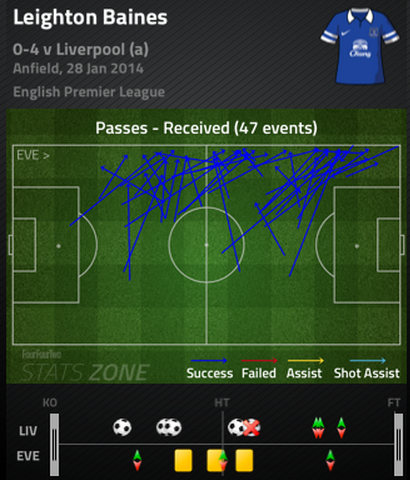 Liverpool with the ball:

Indeed, it is the advanced positioning of Stones and Baines that was the key tenant of Liverpool's attacking game plan. Against Bournemouth, Rodgers put the Sturridge-Suarez interchange on the right flank, leaving Victor Moses as a permanent left winger. Here, he switched it to the left flank so as to attack behind Stones and keep a permanent winger, Sterling, to contest the inexhaustible Baines. With Everton's disciplined central pivot of Barry-McCarthy and advanced full backs, the Reds attacking equation became very simple: direct midfield passing + runs into the channels. 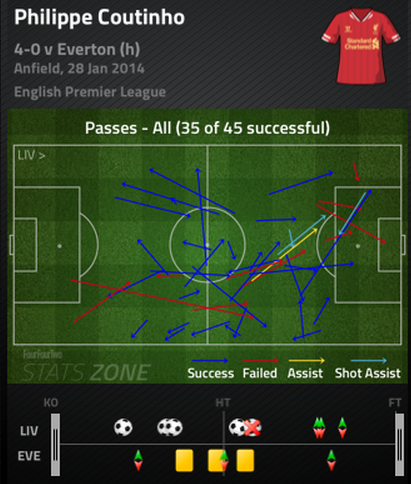 Again, it is Coutinho's performance that is most interesting. Usually, Coutinho's passing chart is dominated by intricate interplay across the final third, but his more direct approach here summarizes that of Liverpool. He either received the ball under pressure and knocked it to an open defender or he faced Everton's net and looked for a killer vertical ball. Duly, we can see the second part of this strategy when looking at Liverpool's attacking trio.

Based upon what we saw earlier in the season, Rodgers would like to field Sturridge and Suarez together in central attacking areas. To do this however, he needs a strong midfield base and presumably learned from the Aston Villa match that Gerrard-Hendo isn't enough. His new plan seems to be fielding one centrally and the other in a position wide enough to close down the full back, but narrow enough to get on the ball in dangerous positions. It's a tough balancing act and it will be interesting to see how it plays out. 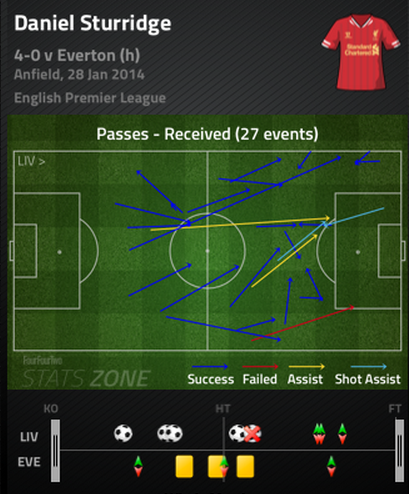 Here though, Rodgers targeted Stones and let Sturridge and Suarez run rampant down the left channel. Sturridge's passes received chart shows him getting several of these passes, with all four of his assisted shots arriving to him in the exact same spot.

Meanwhile, let's flip it around for Suarez and look at his passing chart. From the location of his passes, you can see where he was spending most of his time (advanced, center/left) and the direction of his passes in the final third almost exclusively geared around exploiting the left channel. The Gremlin does some idiotic things (race-baiting, exercises in vampirical studies, etc.) but he is a tactically astute player and his passing chart reflects Rodgers's desire to pick apart the space around Stones. 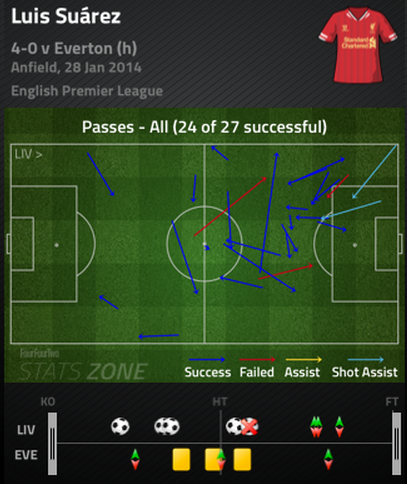 Last but certainly not least, we have Raheem Sterling who continued a rich vein of form with an excellent showing against the division's (arguable) best left back. On top of a great defensive effort, Sterling's direct runs in the right channel kept Baines occupied for the full 90 minutes.

These direct diagonal runs, and what he does at the end of them, are what will make or break Sterling's career. Thankfully, they've become an increasingly consistent part of his game. Rather than just stay hugging the touchline, the young winger has learned when to sprint behind the opposition's offside trap and exploit the gap between full back and center back. 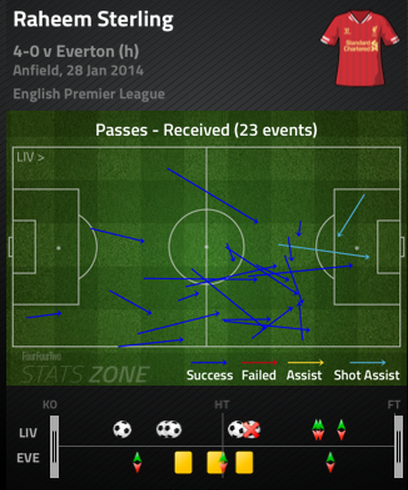 The best example of this actually came last month against City, when his perfectly timed dash behind was horrifyingly ruled offside, but his passes received chart against Everton shows this threat.

Through any different formation/tactic that Rodgers wants to use this year, these direct runs will always have their use. Even if the former Swan boss wants to pack the midfield and dominate possession, the threat of a Sterling diagonal sprint will go a long way towards creating space in central areas in which Coutinho, Hendo, Sturridge, and Suarez can have their fun.

An absolutely brilliant win and, without any doubt, one of Rodgers's finest moments at Anfield thus far. Robbed of vital personnel in both midfield and defense, Rodgers relied on total team defending and whip-smart counter attacks to dismantle the Toffees. What happens when Rodgers has more players available we don't know, but this was a beautiful counter-attacking performance worthy of Muhammad Ali himself.