Tactics Tuesday. It's good to back, it's better to have three points.

Injuries continue to make it difficult for Brendan Rodgers to field a legitimate 18, much less rotate the squad.  At the back, injuries to Mamadou Sakho, Daniel Agger, Jon Flanagan, and Jose Enrique left Aly Cissokho, Kolo Toure, Martin Skrtel, and Glen Johnson to protect Simon Mignolet in net.  Considering Joe Allen's absence, the midfield three featured the obvious trio of Lucas, Jordan Henderson, and Steven Gerrard - with Gerrard surprisingly played at the base of the triangle.  In attack, Luis Suarez was sandwiched by Philippe Coutinho and Raheem Sterling. 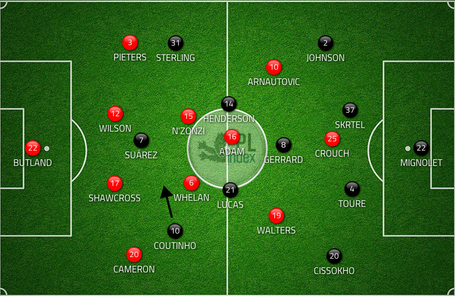 On the other side, Audi RS5-less Jack Butland made his Premier League debut in net and was shielded by Erik Pieters, Marc Wilson, Luca Brasi, and Geoff Cameron from left to right.  In midfield, Glenn Whelan and Steven N'Zonzi supported former Liverpool (pub-crawl) icon Charlie Adam, who played an advanced role.  Summer signing Marko Arnautovic took up the left flank and Jonathan Walters manned the right, leaving Peter Crouch as the lone striker.

As I mentioned above, injuries really made Rodgers's selection for him and, in the end, the Reds were somewhat lucky to concede just three goals.  Toure's endeavor is admirable, but his sub 50% aerial duel success rate matched up against the 6'8" Crouch was a twisted joke.  Stoke was eager to exploit this matchup and, although Mark Hughes is supposedly working toward a more fluid style, the Potters still reverted to firing as many crosses into the box as 90 minutes plus stoppage time would allow.  Currently, Manchester United lead the league with 27 crosses per contest.  On Sunday, Stoke City launched 51 crosses, some of them not even into Liverpool's penalty area per the graphic below.  You can take the manager out of the track suit, but you can't take the track suit out of the manager. 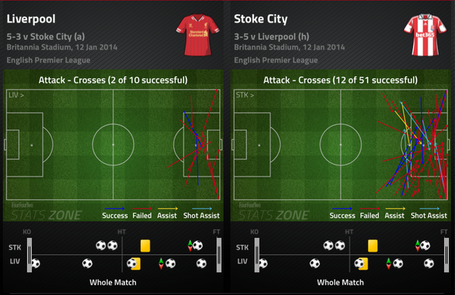 While my distaste for Pulisian methods should be apparent, in this particular game it was a successful strategy.  Crouch won 11 out of 12 aerial contests, most of them against Toure, who finished two of eight.  Stoke's opener came through Crouch pinning Toure on his back to send home a wonderfully directed header, while Walters controlled a shallow cross and slipped it beyond Mignolet in the second half.  Both of these came through Arnautovic on the left, but Stoke's real crossing fiend turned out to be an old friend. 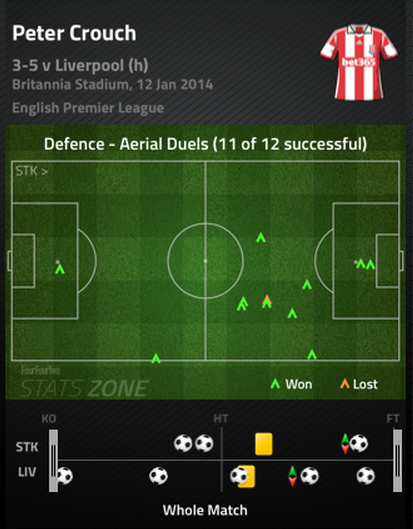 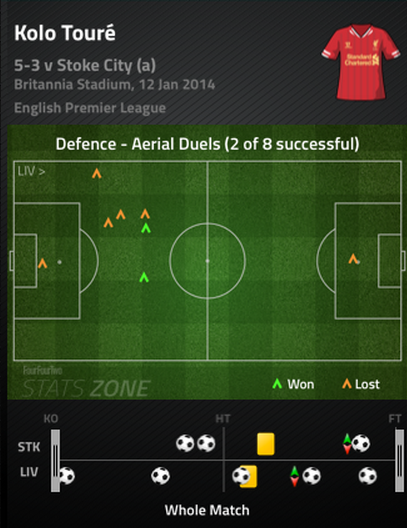 On this night, a clearly motivated Adam put in the highest-energy performance of his career.  Offensively, he received possession between Liverpool's lines across the entire width of the pitch and proceeded to attempt 22 crosses (about half were corners) from, ostensibly, a central midfield station.  His equalizer from outside the area must have turned the on-looking Dalglish's face a shade of purple.  Meanwhile, I imagine each of his eight ball recoveries to have caused Lucas's knee-scar the same searing pain Harry Potter suffers whenever Voldemort is close. 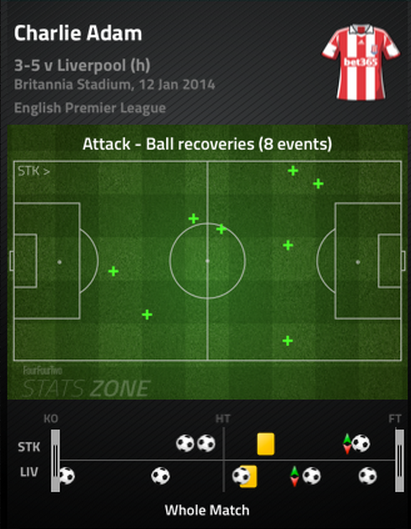 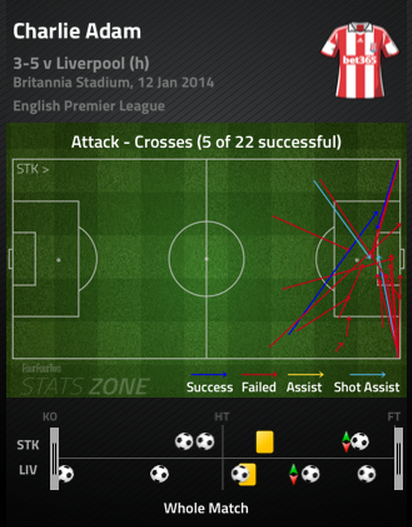 Now, this neatly brings us to Rodgers's decision to play Gerrard as the deepest midfielder and Lucas in a more advanced role - a decision that seems to have ushered in the apocalypse for many fans.  Initially, I found it to be a bold, but somewhat logical move.  Had Hughes sent Stoke out in a 4-3-3 (as he did in the opener), this would have pushed Lucas directly up against Stoke's midfield scrappers in support of Hendo, while leaving Gerrard totally free to orchestrate in front of the back four.  However, as discussed, Hughes put out a legitimate 4-2-3-1 and Gerrard ended up with serious defensive responsibilities against the miraculously energetic Adam.

Having done a little post-game research (you may be surprised, at this point, to learn I don't make Stoke priority viewing), it seems Hughes has long-since shifted formations and dropped Marc Wilson back into central defense from midfield.  Considering he's a professional manager, it's safe to assume Rodgers knew this tidbit and proceeded anyway.

Gerrard's individual performance in this role was actually okay.  His long-range passing was far from efficient, but he led the team with 16 ball recoveries and made some crucial interceptions deep in Liverpool's end.  The results were a bit more mixed for the team though.  Adam's goal came from Henderson misplacing a pass to Gerrard who, unsurprisingly, had begun to storm forward rather than sit in the middle.  Further, although not a liability by any stretch, Lucas going forward was a bit dull and did not offer a cutting edge in the final third after six seasons of taming his attacking instincts. 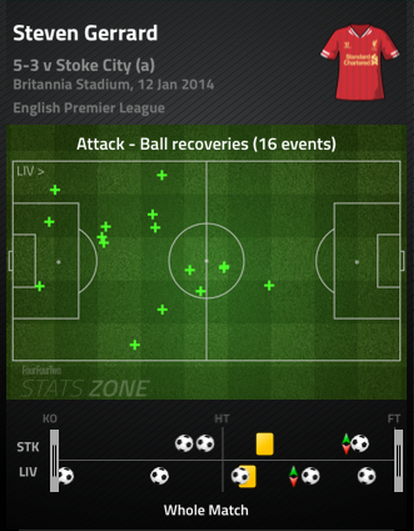 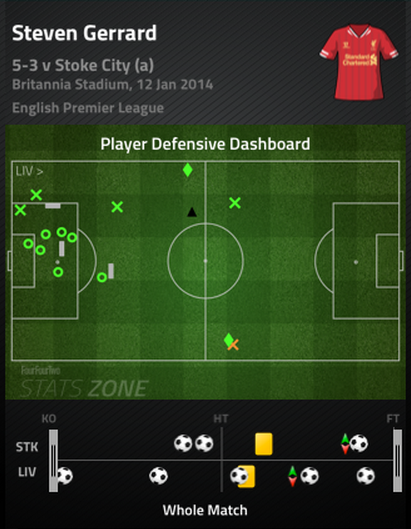 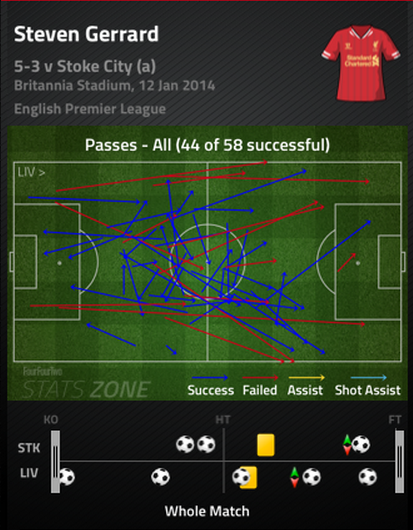 Post-game Rodgers and Gerrard both said this is something they'd been working on for some time and will be using going forward, giving us some pretty big questions.

The most obvious is that having already sacrificed much of Gerrard's final third threat by moving him deeper, do we really want it totally extinguished?

Perhaps more importantly, can Gerrard and Liverpool be successful with him in this role? The closest comparison to midfield structure I could think of is Antonio Conte's application of Andrea Pirlo at the base of Juve's midfield, with Arturo Vidal and Paul Pogba/Claudio Marchisio the surrounding energy guys.  While Gerrard has been very versatile over his career, positional awareness has traditionally been his greatest weakness and one of Pirlo's greatest strengths.  A true regista Gerrard is not.

My distaste for Stoke is perhaps best encapsulated by the English media's favorite litmus test - "but can you win on a rainy winter day at Stoke?"  Sure, this was only Stoke's second home loss of the season, but this kind of thinking only serves to support Pulisian methods instead of castigating them for the abject destruction of all the wondrous potential that stems from this miracle we call "Life on Earth."  I imagine a season ticket to Stoke is a bit like having a front row seat to the Battle of Gallipoli 20 odd times a year.

As such, the bigger litmus test of "character" and "bottle" and all those other intangibles the media loves so much is really "can you sit through an entire game on a rainy winter day at Stoke?"  Much to my delight, the answer of many Stoke fans was "no" and the reason was that Liverpool kicked the can five times.

Even more to my delight was that the Reds did it through a variety of methods.  Aly Cissokho pulled his shot so far wide as to be perfect, deflecting off Brasi for the opener.  Straight out of the Pulisian handbook now spreading thunderclouds of doom at Palace, Liverpool's second brought a perverse sense of joy.  Martin Skrtel's wild clearance up field took a few fortuitous hops, advanced through some horrid defending by Wilson and Brasi, and was neatly slotted home by the Gremlin.  The goals from which we can actually take some teachings however, all came in the second half.

Although Sterling did go down easily to draw a Gerrard-converted penalty, it was a just reward for his performance.  After initially struggling to kick-on from his freshman exploits, the young winger has really turned a corner over the past month or so and this was one of his better showings.  His speed and directness out wide provides excellent balance to an oftentimes congested midfield, moreover he's developing an end product to his game. 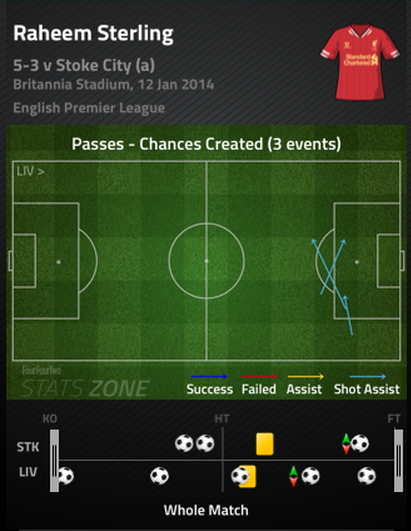 Sterling has always shown the ability to take on defenders, but struggled to do much after he's flown beyond them.  As you see above, he's learned to pick out teammates in the area before squaring across goal and, as you see below, he's become a seriously committed wing defender.  Gerrard was right when he said Sterling will be on the plane to Brazil should he continue his current form. 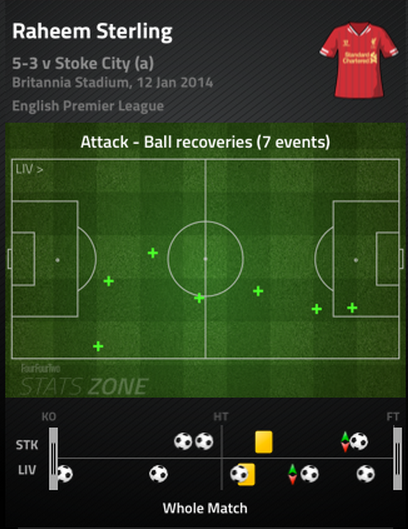 As for the fourth and fifth goals, three letters suffice: SAS.  Daniel Sturridge came back like he'd never left.  A magnificent assist for a Suarez bender and a tremendous "juggling act goal," after a superb diving save by Butland seemed to deny him.  The Englishman showed just how sorely missed he's been over the brutal Christmas slate.

Well it's more about looking ahead than behind, I think.  Sterling's development and Sturridge's return both bode very well for the boys in Red, but whether the Gerrard "controller" experiment continues and, more importantly, to what effects can only be answered in time.  The best news of all however, is that barring a cataclysmic FA Cup draw,we won't have another "rainy winter day at Stoke" until next season.  For that, we're all thankful.