Liverpool continued its perfect start to the season with another Sturridge goal, another clean sheet, and another David Moyes loss at Anfield. Let the good times roll.

A very special Tactics Tuesday indeed!  The boys in Red snagged an early lead and ran out of Anfield with a third consecutive 1-0 win to start the season.  Brendan Rodgers has his first United scalp, lets break down how it was hacked.

With no European football to juggle, Rodgers has opted for continuity in his team sheets thus far in the campaign.  We've seen the same 4-2-3-1/4-2-2-2 hybrid in every match (something that should allow a seamless re-integration of Luis Suarez in a few weeks, but more on that digression in a bit), with the only changes here due to injury midweek.  Martin Skrtel came in from the cold to replace Kolo Toure at the back, the rest remained unchanged from both Stoke and Villa.

On the other side, David Moyes rolled out a somewhat similar shape.  The back five was easy enough to predict with David de Gea in net, Nemanja Vidic partnering Rio Ferdinand, and Patrice Evra and Phil Jones manning the flanks. Cesc Fabregas Thiago Alcantara Ander Herrera Tom Cleverley was selected to join Michael Carrick in central midfield, with the pace of Ashley Young on the left wing countered by the experience of Ryan Giggs on the right.  Up top, Danny Welbeck played a narrow role just off main striker Robin van Persie. 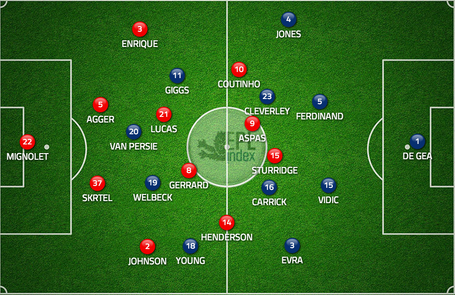 In the match preview, I highlighted my concerns about Liverpool's defensive options with Kolo Toure's injury and Glen Johnson's rather indifferent form stretching back into last year.  Thankfully, my worries were well and truly unfounded.

At right back, Johnson had by far his best performance in several months.  That his opposing threat, Young, was substituted for Nani after sixty minutes speaks to the job done by Liverpool's full back.  From two crucial blocked shots in his own area, to several interceptions in United's half, the Englishman was one of the best players on the pitch before an ankle injury forced his substitution. 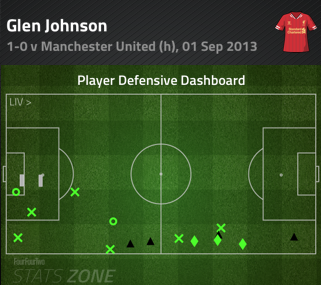 The other defensive player deserving of attention is the aforementioned Skrtel who had been linked with a move away from the club all summer.  The transfer to Napoli didn't come to fruition, and Toure's injury saw the Slovakian return to the fold.  He looked sluggish to start but quickly turned into the monster we haven't seen in quite some time.  11 effective clearances, three tackles, two interceptions, two blocked shots - he resembled the player we saw under the tutelage of Steve Clarke in 2011/2012.

On the left side of defense, Daniel Agger and Jose Enrique had the solid performances we've already seen to start the season.  That van Persie only had one decent chance (a sliding shot into the side of the net in the second half) speaks to the entire unit's organization and structure.

Though less so against Stoke, in consecutive victories (Villa and United) we've seen Liverpool drop deep to shut up shop and hold onto the win.  I would argue that this defensive performance was even more impressive than the one at Villa Park and confirms Rodgers to be more a pragmatic strategist than hardcore ideologue.

Same as it ever was.  Jordan Henderson on the right, Lucas and Steven Gerrard in the middle, Biggie Smalls Phil Coutinho on the advanced left.  We saw a markedly different, but no less effective, performance from the midfield this week.  Liverpool's early goal meant the aforementioned emphasis on defensive structure, leading to less fluidity in build up play going forward.

With Gerrard having played a gruesome 120 minutes midweek, I wondered if we would find ourselves with an empty gas tank on the side of the highway, trudging along with the little red container to the nearest station 16.3 miles down the road.  The captain did tire late, but ran the whole show for damn near 75 minutes.  Rafa Benitez recently remarked that his new talisman, Marek Hamsik, has less strength but more tactical understanding than Gerrard.  I would argue that in the past 12 months we've seen the blossoming of a late-career Captain Fantastic - more reserved going forward, but quietly pulling all the strings from deeper in midfield.  Some were unsure if he could make the transition, but, to me, he now seems more Michael Corleone than Sonny.  Thankfully, this Godfather comparison also includes Tom Cleverley reprising Fredo - great stuff.

Next to him, Lucas was simply superb and gave the performance we've been waiting on for the past 20 months.  Five tackles, six interceptions, three clearances, and all the tidiness in possession you'd expect from a Brazilian midfielder.  Lucas's health will be the difference for Liverpool in qualifying for the Champions League. 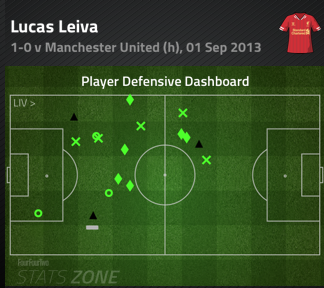 Out wide we saw an interesting dichotomy - the deep defending and less fluid shape more suited Henderson than Coutinho.  Henderson gave Evra a solid battle on the flank, and his energetic running was crucial in front of the green Andre Wisdom and alongside the fatigued Stevie G late on.

Coutinho meanwhile, had a rather rough go of it as Liverpool progressively became more defensive.  He caused trouble for Jones early on and, quite amusingly, gave Imogen Thomas's former lover the run around until the old dog got salty and took him down.  Rodgers tried to unshackle the Brazilian later on by bringing on Raheem Sterling for Iago Aspas and shifting Coutinho to a central role under Daniel Sturridge, but it was all about the iron curtain at that point anyway.

A quick sidenote on United's midfield, has either Alex Ferguson or David Moyes ever watched Shinji Kagawa play?  Giggs, Young, and Welbeck combined for a grand total of two key passes and zero through balls despite needing a goal for essentially 90 minutes.  The Japanese playmaker absolutely dominated the Bundesliga before his United switch and, arguably, would have offered more than any of the aforementioned trio.  Unarguably, he would have offered more than Anderson who made the bench ahead of him.  Wait, what am I doing?  Play Anderson, definitely play Anderson.

Another Notts County 120 minute ironman, Daniel Sturridge got himself 90 minutes while nursing a thigh injury.  On one hand, this wasn't a complete influential performance and tin man Ferdinand was rather comfortable for much of the game.  On the other hand, this was a complete influential performance because he gave Liverpool a lead within five minutes that changed the rest of the proceedings.  Three games, three goals, nine points - the man could retire right now and Liverpool would still have gotten a bargain from Chelsea.

Aspas meanwhile, did not have a great match.  His work rate and defensive commitment certainly cannot be called into question, but he did not present a serious attacking threat in either of Liverpool's past two fixtures.

Getting back to Liverpool's shape and the return of Suarez, Aspas is the man he'll clearly be replacing.  With Sturridge currently the best striker in the league, discussion by those who do not watch enough Liverpool has centered around "who will shift out wide" when The Gremlin returns.  The answer by Liverpool fans is a pretty clear "no one."  Rodgers has not insisted upon a 4-3-3 and this current fluid setup is tailor-made for Suarez to both link play between the lines and get forward to score goals.

Sturridge will end up cannibalizing some of Suarez's goal tally, but considering it's healthy to have more than one goal-threat in a side, we should absolutely get excited about the now-confirmed Sturridge-Suarez partnership for 2013/2014.

Damn you Sturridge, damn you!