Liverpool look to bounce back from two consecutive defeats against bottom of the league Sunderland.

After a bitter loss to United in the Mickey Mouse Cup, we will be looking to take some vengance on Sunderland.  Liverpool used a 3-5-2 or actually more of a 3-4-1-2 that we will likely see again.  Considering the players at his disposal, Rodgers may not have any choice.  In all reality it worked quite well.  It wasn't the tactics that failed Liverpool against the Mancs, it was their finishing and touch.

With Sunderland it is hard to say what will happen.  With a new manager and 14 new signings over the summer it is anyone's guess.  Given that DiCanio had clearly lost the dressing room and his marbles (although it is debatable as to whether he actually ever had them) he had to go.  That sacking might very well be the catalyst for Sunderland to pull off the upset.

Liverpool will have to be quite careful and take advantage of the opportunities presented them.  With Suarez back, this should help that matter after he knocked the rust off (hopefully) on Wednesday.  By now Sturridge's touch should have had a chance to sober up.  If these two are firing on all cylinders is should be a long day for the Black Cats.

Some thoughts from us:

-It will be interesting to see how Sunderland will react to the sacking of DiCanio.  Given the talent they have, there is no way they should be bottom of the table. (Adam)

-I try to avoid media traps like "must-win game" but I'm also a hypocrite, so I'll label this a "must-win game" for Liverpool.  There are no excuses here and a comfortable win against a bottom of the table side with a care-taker manager is sorely needed.  (Matt)

-Stevie G has really been quite ordinary lately.  Given the caliber of his abilities, there is not way this continues for too much longer.  I would expect a big game from him where he should have more time and space on the ball.  (Adam)

-Often times players can try too hard against their former teams.  I wouldn't mind seeing Henderson sit this one out. (Adam)

-I want to see Joe Allen get a serious run.  Time to give the man another chance, though where he fits in is hard to say. (Matt)

-Fingers crossed Jose Enrique maintains his fitness, and will Martin Kelly be able to go twice in one week? (Matt)

-Jose and Stevie played some terrible football, as did Lucas... But, as said above, these are some of the best players in the Premiership at their best, and hopefully they turn a corner this weekend. (John)

-I actually thought that Enrique was really good besides the obvious corner gaffe, but for sure Gerrard and Lucas need to improve. (loyal2reds)

-It'll be interesting to see what Sunderland have to offer... They've turned a corner of their own it seems, but hopefully we can stunt them in this match. (John)

--Will this guy get his tattoo removed? (Adam) 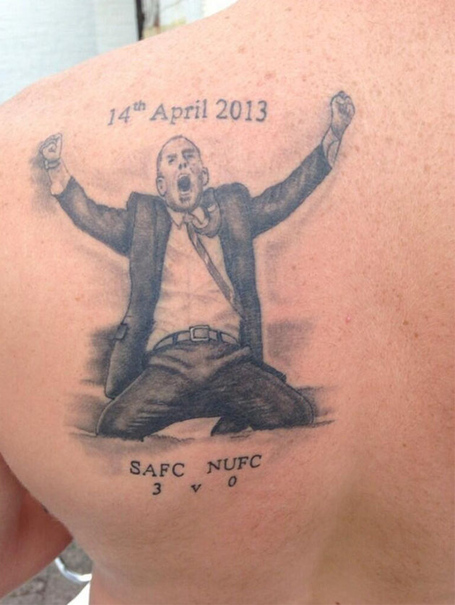