Some Tuesdays are better than others. Today is a nasty trip to the morgue as we perform the autopsy of Liverpool's grotesque defeat to Southampton.

Share All sharing options for: Tactics Tuesday: Southampton 1 - Liverpool 0, We All Lost.

It's all doom and gloom in Liverpool-town after the weekend's horrific loss to visiting Southampton. On a different day with competent officiating, Liverpool probably goes up a goal from a Daniel Sturridge penalty, retreats back into an incredibly solid defensive shell, and runs out a 1-0 winner. Instead, Southampton snagged a goal from a corner, fatally exposing Brendan Rodgers's flawed tactical setup.

Eyebrows were arched everywhere at the release of a Liverpool team sheet with a Tony Pulis-ian four center backs in front of Simon Mignolet in net. Mamadou Sakho made his Anfield debut at left back while Kolo Toure replaced Andre Wisdom across on the right. In between were Daniel Agger and Martin Skrtel. Lucas and Steven Gerrard once more in the middle of the park, supplemented by Jordan Henderson's narrow-right role. Further upfield, Victor Moses kept his role on the left wing with Iago Aspas replacing Philippe Coutinho in support of Daniel Sturridge.

On the opposite side, Mauricio Pochettino laid out a very similar formation with the exception that his full backs are... full backs. Artur Boruc in goal, Luke Shaw, Dejan Lovren, Jose Fonte, and Nathaniel Clyne across the back four. Victor Wanyama and Morgan Schneiderlin formed a rock solid defensive partnership while Adam Lallana reprised Jordan Henderson by coming inside frequently from the right flank. Jay Rodriguez played the more direct role on the left while Pablo Osvaldo played something akin to Michu's "false 10" role underneath Rickie Lambert. 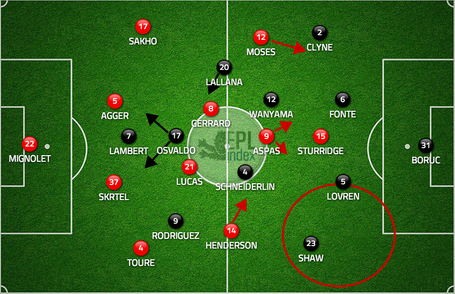 Now, I don't ever want to see four center backs across the pitch again, but Rodgers's decision to play Toure and Sakho on the flanks, unto itself, was actually not the reason Liverpool played so poorly. By looking at both players' respective passes received charts, you can see that both actually did okay in making themselves wide outlets up and down the wings. 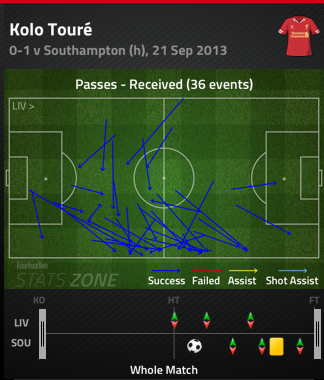 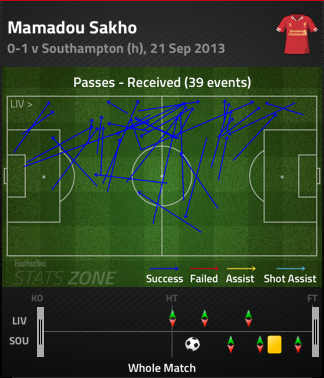 Sakho's offensive contribution did not include crosses or dribble attempts, but his most frequent pass combinations were from Gerrard (10), and Agger and Moses (six apiece). Meanwhile, he played the ball most frequently to Moses (13 times) and Gerrard (seven). As far as playing him on the left, you really couldn't ask for a more solid offensive role than working his two triangles (Agger-Sakho-Gerrard and Gerrard-Sakho-Moses).

Toure's performance was sharply different than Sakho's. He was surprisingly adventurous in his attacking play - totally unafraid to take on defenders off the dribble (5/8). This was necessary because though similar to Sakho in receiving the ball from his local center back (Skrtel seven times) and near midfielders (Henderson seven times, Lucas six), Toure usually ended up returning the ball to Skrtel (eight times) and Henderson (seven), or making a wayward pass. The Ivorian finished just 29/44 passing, and his passing chart shows that he struggled to be positive in passing the ball forward. This very nicely brings us to the real flaw in Rodgers's tactical design.

You could get away playing four center backs if there was natural width in front of them. Indeed, Sakho's conservative role on the left was somewhat tempered by having a natural winger, Moses, in front of him and this was where the game's key individual battle played out. Moses was often Liverpool's clearest attacking threat (six successful dribbles), but Nathaniel Clyne had a simply superb defensive performance. 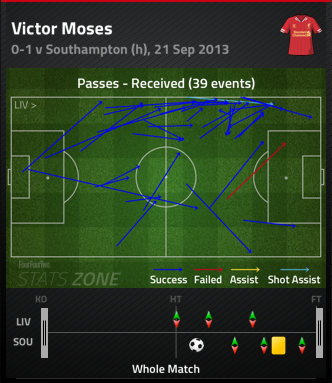 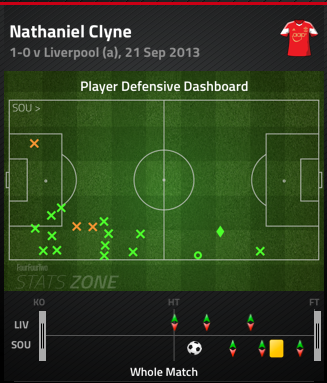 On the right hand side however, Henderson stayed deeper and narrower as is his usual wont. With Toure behind, there was no attacking outlet for Liverpool in an advanced right position, essentially leaving the right side of the pitch a cul-de-sac for Liverpool attacks. Toure admirably tried to compensate by dribbling into this space, but it was still a road to nowhere as he neither attempted a cross, nor had success with positive passing as previously mentioned. 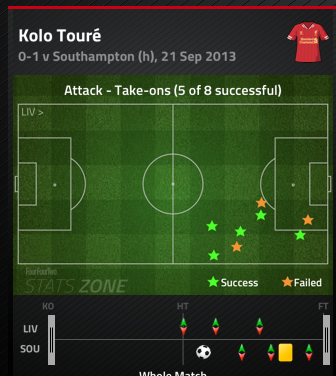 To compound this problem, Southampton's skewed midfield triumvirate of Schneiderlin-Wanyama-Lallana gave as good as they got. The game had a very choppy feel to it as neither side could really get a total grip for long stretches at a time - something for which Pochettino would have been thrilled and he duly deserves a lot of credit.

Interestingly, Rodgers seemed to try and remedy these problems by bringing on Raheem Sterling for Aspas at half time. Duly, he moved Jordan Henderson into the center of the park in his more industrial #10 role that he played for stretches last season.

Whether this would have been successful or not is hard to say as the Saints scored from a corner early into the second half and then dared Liverpool to break them down. With an attacking band of Moses-Henderson-Sterling, the Reds would have been a serious threat on the counter attack - breaking into space at full speed (though Sterling bungled a late opportunity of this sort late on). As it was, the trio couldn't muster enough creative play in the final third to really threaten, and Southampton closed comfortably.

I've also seen some calls for a three man backline and this would have been a decent option had more personnel been available. With Osvaldo a narrow second striker, Liverpool could have played three at the back and gobbled up the Saints' striking duo. The problem however is who would have manned the wing-back roles and we're essentially right back where we started.

If people didn't want to see Sakho or Toure at full back, pushing them even further up field could have led to widespread rioting and looting. Whether Jose Enrique was fit to start could have changed this (if he and Gerrard start against United in that stupid freaking Cup I'm going to lose my mind), same goes for Martin Kelly.

As it stands without inside fitness knowledge, I think Rodgers' second half formation was the best option from the start.

Daniel Agger should be offended by Lovren's winner. I feel it safe to say that everyone around these parts loves the Dane, but Lovren absolutely stole his lunch money and then rubbed his face in the dirt afterward. Woof.