Liverpool gets back in action with Southampton making the trip to Anfield on Saturday, it's payback time.

It's incredible to realize that Liverpool's last loss in the Premier League came at the hands of Mauricio Pochettino's Southampton, way back in March of last year. Remarkably, that 3-1 defeat at St. Mary's served as a catalyst for both sides as Southampton went on to comfortably avoid the drop and the Reds closed out the season with pride, if not European play.

The summer was an interesting contrast in transfer strategies by the two clubs. Liverpool's work is well-known around these parts - lots of volume, limited big money transfers (Mamadou Sakho's late pickup the sole qualifier to). Southampton, on the other hand, went for quality over quantity. Midfielder Victor Wanyama and forward Pablo Osvaldo both joined for figures in the low teens, while Lyon center back Dejan Lovren crossed the Channel for a figure just short of double digits.

Southampton's strategy of plucking choice players to supplement its impressive home-grown stock is a sound one for my eyes, and Pochettino has his squad playing in a pleasing manner. Last year, Liverpool was the first club to really face a congealed Southampton and we shouldn't be surprised by the Saints' style this time around. High-energy pressing and sequences of very attractive interplay can be a heady brew, but, as Liverpool fans can commiserate, totally infuriating when accomplished infrequently.

Indeed, Pochettino's main task as of now, besides learning English I suppose, is to get his side performing with more consistency. An opening day win over stuttering West Bromwich Albion has been tempered by the unpleasant sandwich of two draws (Sunderland and West Ham) around a narrow loss to Norwich City. Then again, the Saints did manage to hammer Barnsely 5-1 in the What-Do-We-Call-It-Now? Cup, which is more than Liverpool can say.

For the good guys, Brendan Rodgers is dealing with a rather unfortunate slate of injuries. Glen Johnson and Phil Coutinho (Ashley Williams you rat bastard) are out long term, and Aly Cissokho is nearing fitness but not there just yet. Word on the wire is Daniel Agger may return and Martin Kelly is on the precipice, but I'm now having sleepless nights about Daniel Sturridge's ongoing battle for full fitness. Considering Iago Aspas's ongoing concussion woes (you heard it here first), many will rejoice when realizing this is the end of The Gremlin's suspension. Considering these roaming variables, a guess at a starting lineup is difficult but I'll take a stab: 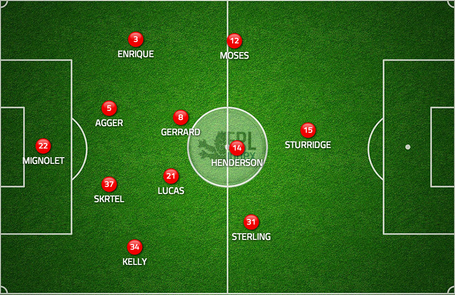 For the bad guys, their defense has been more consistent than their attack. Lovren and Jose Fonte have been rocks in the center of defense while young full backs Nathaniel Clyne and Luke Shaw have been quite impressive as well. Like Shaw, midfielders James Ward-Prowse, Calum Chambers, and Morgan Schneiderlin continue to show why the Saints are so damn impressive developing young talent and join Wanyama in pushing for starts. Uruguayan Gaston Ramirez, like Fulham's Bryan Ruiz, has undeniable technique but seems ill-suited to the pace of the Premier League and it's unlikely he'll get his first start of the year on the road. Adam Lallana, the enigmatic Osvaldo, Jay Rodriguez, and newly-minted Roy Hodgson battering-ram (say that five times fast, I dare you) Rickie Lambert are all in the mix for attacking berths.

Looking forward to virtually hanging with you tomorrow morning.

Thoughts filtering in from the whole gang:

How Rodgers replaces Coutinho effectively decides this match for me. If it is Aspas, some Jim-Jones Kool-Aid becomes a necessary addition to my living room table. (Matt)

Aspas starting would be unfortunate for Liverpool, but it seems we have more than enough attacking options to ensure someone else plays. However, nobody coming off the Liverpool bench will totally replace Coutinho, although against Southampton they might not have to. (loyal2reds)

No predictions this week, but I will say the boys should have some real fire in their bellies after last year's truly comprehensive capitulation. Want to show the draw in Wales was but a minor blip? Come to play for the full 90 minutes. (Matt)

And in a tangential follow-up to the above, Warrior's "We Come Not To Play" marketing campaign remains one of the most ill-conceived slogans in recent times and is worthy of its own resistance movement. (Matt)