It's Tuesday. It's Tactics. Yesterday saw a remarkable encounter between the Reds and Swansea City, so let's bust out some magic markers and head to the white board.

As if the international break didn't deprive you of Liverpool for long enough, the Reds were handed the Monday evening time slot for their duel in Wales against the Swans. The wait was well worth it, as we were not only treated to an incredibly entertaining contest, but also to a real managerial chess match between Brendan Rodgers and Michael Laudrup.

I'll be doing the breakdown a bit differently this week. Instead of running through each section of the team, let's compare the first and second halves and, in doing so, emphasize the importance of Laudrup's half-time change of Jonathan de Guzman for Nathan Dyer. Also, since we got more goals in Wales than the other three matches combined, the goals breakdown will have its own post in the coming days.

Both injury and form saw Rodgers make some significant changes to what had been a relatively stable starting 11 through the first three fixtures. Of the back five, only Simon Mignolet and Jose Enrique have featured in every match. Andre Wisdom took over for the injured Glen Johnson at right back, Martin Skrtel retained his place after a dominant performance against Manchester United and was partnered by new signing Mamadou Sakho after Daniel Agger's "freak" rib injury suffered in the weight room this week.

In midfield, Steven Gerrard and Lucas formed the obligatory base while Jordan Henderson retained his tucked-in role on the right side. In a fascinating change, Rodgers made good on his promises of giving Philippe Coutinho a central role and did so by replacing Iago Aspas with loan signing Victor Moses who played wide left.

For some foolish reason, Daniel Sturridge was given another start up top.

On the other side, Laudrup laid out his team in a somewhat similar fashion. A back five of Michel Vorm, Angel Rangel, Chico Flores, Ashley Williams, and Ben Davies was expected. The midfield five featured Leon Britton and Jonjo Shelvey in the engine room supporting an attacking band of Nathan Dyer, Michu, and Wayne Routledge. Wilfried Bony started from the off as the side's attacking spearhead. 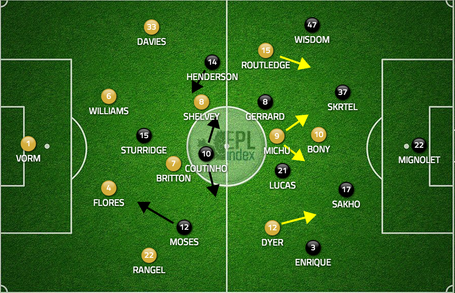 Despite the similar shapes, the different applications of the right and central attacking midfielders were the key features of the first half. Henderson's tucked-in role was different from Nathan Dyer's more wide and direct program, leading to Laudrup's half-time switch. Also, comparing Coutinho to Michu is apples to oranges. Coutinho drifted side to side between the lines trying to link midfield to attack, while Michu got the role he craves as a support striker reading play and then making late runs to the area.

The effect of these differences was Liverpool controlling play for much of the first half (52% possession on the road) while Swansea provided a real menace on counter attacks and turnovers in Liverpool's end (10 shots, six on target, to Liverpool's eight and four respectively). Henderson's narrow station as compared Dyer's wide and advanced positioning gave the Reds an extra man in midfield. This advantage was compounded by Coutinho's new central role as a traditional number 10 versus Michu's support striker role.

Playing the full 90 (the last third as the main striker), Michu completed 20/24 passes and attempted six shots. Coutinho, playing around 55 minutes, was 37/42 passing wise, with two attempts at goal. To better understand Coutinho's role, take a look at his passing combinations. He most often received the ball from Lucas (14 times) with Henderson a distant second (seven). He then played the ball to Sturridge seven, Gerrard six, Henderson six, Lucas six, and Moses five times. Clearly, Michu was focused on scoring and Coutinho on tying together the midfield and attacking sections of play.

Coutinho's role between the lines: 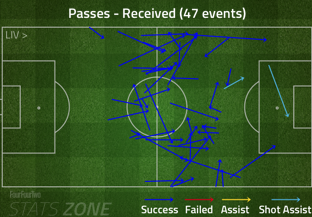 While the goals largely came from Shelvey's omnipotence (again, these will be broken down for better and for worse later this week), the tweaks in system gave Liverpool a slight edge in what was a relatively even first half contest. With an injury-riddled back line, Rodgers's system helped Liverpool control play - something I think is well-illustrated by looking at the clubs' respective attacking third passing charts: 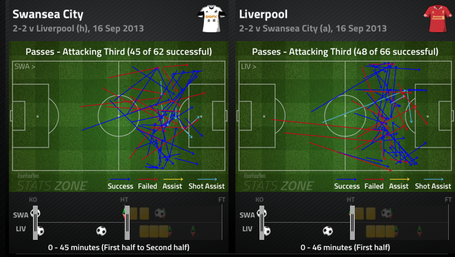 Compare the above visuals to those of the second half, and, clearly, something very drastic occurred. 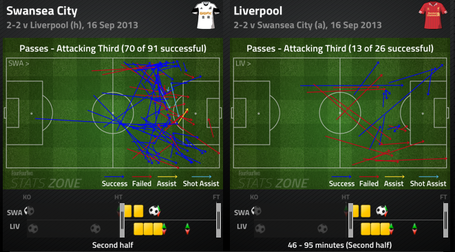 Second Half: de Guzman for Dyer, Coutinho Hacked Off and Replaced by Aspas 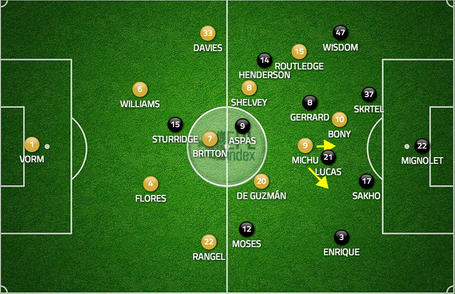 Despite only trailing 2-1, Laudrup was not content trading punches with Liverpool. Instead, he proactively brought on de Guzman for Dyer, and the Dutchman by way of Canada played an exaggerated version of Henderson's role. Ostensibly the right-most midfielder, de Guzman roamed across the entire field to tremendous effect and saw Swansea control play for the entire second half (finishing with 58% possession for the entire contest after being down to 48% at the half). 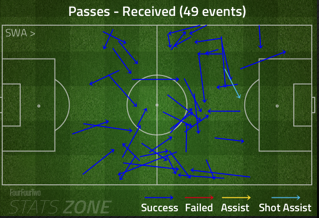 Now, in what is becoming an oft-told tale, the Reds did drop deeper and try to preserve their slim lead. However, unlike previous matches where a more defensive style just meant a different kind of control, Liverpool's second half became a frantic exercise in self-preservation. Laudrup's half-time switch helped even the midfield numbers battle, but three individual factors on Liverpool's side also played a huge role.

First, Daniel Agger was out and as much as I think Sakho will be a hell of a signing, the Dane was sorely missed. Statistically Sakho was fine both defensively - two of three completed tackles, a perfect 15/15 in clearances with 10 off the noggin - and comfortable on the ball almost to a fault - 40/42 passing is great, a series of back-heel flicks in possession like playing a live version of Frogger. What his limited English couldn't do however, was replace Agger's organization in a back-line featuring just one regular from last year. That he mentally shut off on Shelvey's opener and then followed Bony into midfield on the equalizer certainly didn't help.

Second, it hurts to say Steven Gerrard had a very poor game. Whether related to playing so many international minutes for the Three Lions or not, Gerrard completely disappeared when a calming influence was needed in the second half. He went 30/35 passing in the first frame and just 13 of 19 in the last 45 minutes. Someone in the comments section brought up missing Xabi Alonso (raise your hand!) and it was a great point. The Reds desperately needed a few 2-3 minute stretches of totally sterile possession sprinkled through the half in order to get some wind back in their sails. Horrifically, it was Jonjo Shelvey who thrived as the game's pace-setter after the break. 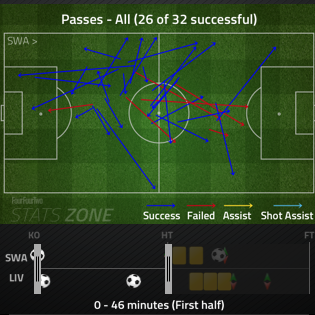 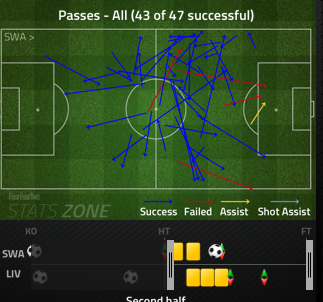 Finally, Phil Coutinho was hacked off by Ashley Williams. I don't know whether Williams is just salty that he'll never move to a big-time club or what, but the man is quickly carving himself a cozy enclave in the darkest parts of my heart. Coutinho's exit 55 minutes in saw Rodgers essentially make the reverse change that Laudrup opted for to start the match. Iago Aspas came on and justified his recently conceded starting gig by doing absolutely nothing worthwhile. If there was a match tailor-made for Joe Allen's patient passing and intelligent positioning, this was it. Ironically, after Swansea leveled Laudrup lifted Bony for link-up man Alex Pozuelo - leaving Swansea with an almost identical system to the one with which Liverpool started.

The summation of these factors was the Swans running downhill for a solid 45 minutes and the Reds openly aiming for a solitary point by the game's latter stages. Unto itself, a point away at Swansea is far from a car crash of a result, even moreso having gone down a goal within 90 seconds. But when considering the Reds' recent form and a 2-1 lead, to close the game blowing in the breeze, one-handedly clinging to the cliffside was extremely disappointing. Rodgers's initial tactical setup was excellent, but he was outfoxed by Laudrup's introduction of de Guzman and then threw gasoline on the fire by introducing Aspas for Coutinho.