We're back with another Tactics Tuesday, this time with the bonus of it being a matchday as well. Let's catch up on the first XI's tactics against Villa before we get some real squad rotation this afternoon against Notts County.

Seeing as Rodgers basically rolled out the same shape as last time, we'll give a little more weight to breaking down the goal this week.

As above, Rodgers's setup was very similar to the one we saw against Stoke City. I did find it interesting however, to watch the fluid 4-2-2-2/4-2-3-1 hybrid come up against a more tactically astute manager in Paul Lambert as opposed to Mark Hughes. Despite Villa's brutal early schedule, Lambert was still able to use his young side's energy and tremendous mobility to better effect than Hughes's plodding bruisers. 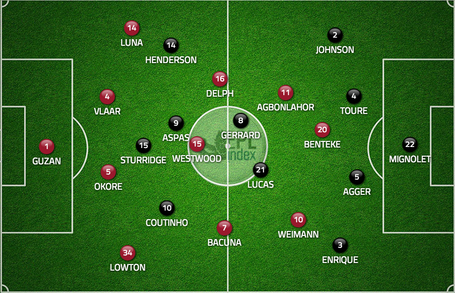 We got the obvious back five once again of Simon Mignolet, Glen Johnson, Kolo Toure, Daniel Agger, and Jose Enrique. The continuity from Toure and Agger was helpful and the duo played very well against a talented Villa front three of Christian Benteke, Andreas Weimann, and Gabby Agbonlahor. I was eager to see Toure-Agger tested by a target man the caliber of Benteke and aside from a late shot brilliantly saved by Mignolet, the duo kept the giant Belgian largely at bay. Very promising stuff moving forward to United next week.

On the flip side, we got a decent performance from Enrique and another mixed bag from Johnson. As a challenge for Enrique, Aly Cissokho has arrived on loan and will likely get a start in the What-Are-We-Calling-This-Now? Cup. On the other side, we'll need to see either Martin Kelly or a new signing push Johnson at right back. His play has been OK, but I think it's fair to say Liverpool expects a whole lot more than OK from the England regular.

Same midfield as against Stoke, with a very similar performance from the Steven Gerrard-Lucas axis once more. The Reds came out flying and totally dominated proceedings until a marked switch in momentum a couple of minutes after Daniel Sturridge's opener.

The major difference this week came from the opposition. A major upgrade on Stoke's Glen Whelan-Marc Wilson-Steven N'Zonzi trio, Aston Villa's Fabian Delph, Ashley Westwood, and Leandro Bacuna midfield three initially struggled to get a grip on the game. Gradually, they took over proceedings with Bacuna and the impressive Delph providing energy either side of Westwood - defensively tasked with sitting in central passing lanes and then playing balls to either flank when in possession.

Delph on the left: 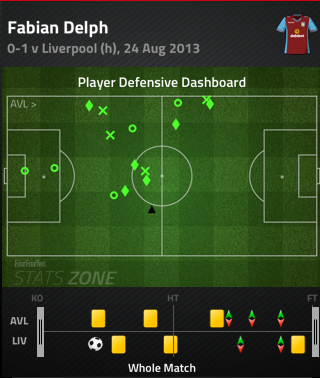 Bacuna doubled up with Villa right back Matthew Lowton to make life difficult for Philippe Coutinho who did not have the same incisive performance as against Stoke. He struggled to dictate play roaming across the pitch (Lowton bombing down the right flank a major factor here) and his best contribution turned out to be letting the ball run onto Sturridge for the goal.

Bacuna's work on the right side: 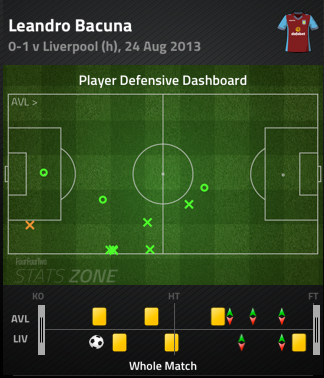 And Phil's struggles to get inside: 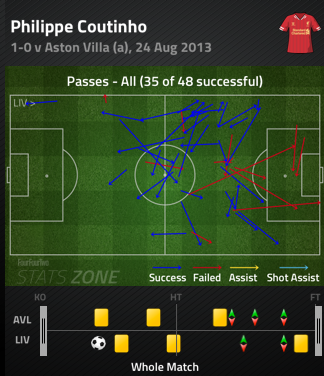 On the right, Jordan Henderson held a much higher position against Antonio Luna and, unsurprisingly at this point, had a poor game. Negative in possession and not bringing the same late runs from midfield, Henderson is not successful in this formation when in a more advanced role. We saw it repeatedly under Dalglish and now more often under Rodgers -- if he plays wide right in this set-up, he needs to stay deep and narrow.

Iago Aspas and Daniel Sturridge up top in the same extremely fluid partnership we saw against Stoke. Sturridge's impact was largely through his tremendous goal, and we'll get to that in a bit.

Much like Coutinho and Henderson, Aspas struggled to make an impact on proceedings. Villa's Ron Vlaar and Jores Okore make for a much more mobile center back duo than Stoke's Ryan Shawcross and Robert Huth, and the pair had a largely fantastic game. Aspas was not the creative link man we saw at Anfield, and his lack of a goal threat left the scoring onus upon Sturridge.

The sequence starts with Villa in possession and Phil Coutinho harrying Agbonlahor into a poor turnover in midfield. Executing his role well, Lucas mops up by deflecting the sloppy pass intended for Westwood to Aspas who gathers and lays it off to Coutinho. With Villa caught up-field, Sturridge peels into the channel behind Matthew Lowton, pulling Okore all the way to the touchline by the time he receives Coutinho's ball.

Shut out of heading towards goal, Sturridge dribbles away from goal and infield where he drops the ball to Gerrard. Despite Okore doing well in turning Sturridge away, the turnover has left the Villans a disorganized mess positionally, and a step behind the Reds for the entire play.

Upon Sturridge's pass to Gerrard: 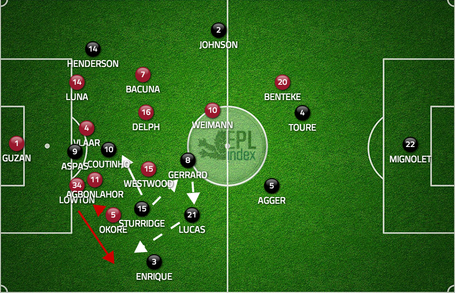 Gerrard's first touch concedes the ball to Lucas, who immediately slides it over towards Enrique who moved has moved forward into the space vacated by Sturridge. Since Lowton had been tucked inside to close Okore's original gap in the backline, he now must sprint a good distance to close down Enrique.

Okore retreats to the backline while Sturridge makes a seemingly lethargic run down the center of the field. He is picked up neither by Westwood -- ball watching Enrique -- nor Agbonlahor who has bizarrely decided to stop playing directly outside his 18 yard box. The only Villa player to realize Sturridge's threat is Delph, but he springs into action too late. Enrique has already played the ball into the center and Sturridge has two steps on him towards goal.

Crucially, Aspas's advanced position has held Ron Vlaar inside his own area and also attracted the attention of Okore. Unto itself, there's no problem for Villa in the two center halves shutting down access to the most advanced forward. The issue in this case however, is that Coutinho is now totally unmarked just outside the area with both Westwood and Agbonlahor doing nothing of service to their side.

Realizing the situation, Vlaar aggressively attempts to close down Coutinho, only to see the Brazilian let the ball run past onto Sturridge. With Delph a step behind and Luna coming in from marking Henderson out wide, Sturridge's innocuous shuffle has turned into a direct run at goal. 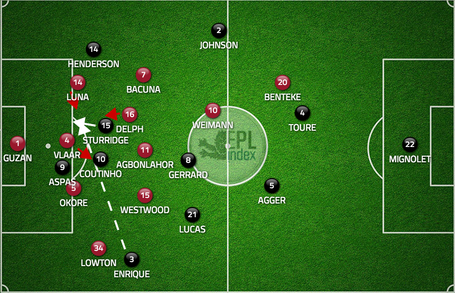 From here, Sturridge displays some stunning technical ability. After jinking right past Luna, the Englishman takes it around Brad Guzan and finishes into an impossibly tight angle. You really need to see the reverse goal side replay to appreciate the finish - an outside of the boot flick from his left foot while falling to ground.

The goal only builds upon what we discussed last Tuesday about Liverpool's current strike partnership. Aspas and Sturridge have license to interchange positions in Rodgers's fluid setup, and, yet again, Sturridge preyed upon defenders who lost attention to his movement further away from goal. Also, Gabby Agbonlahor should drink for free next time he's on Merseyside -- his shockingly lazy play was a big part of this one.