Another week, another Tuesday, and that means we got some tactics to discuss. Let's take a look back at the Reds' season-opening victory over Mark Hughes's not so new, and not so improved Stoke City.

While Rodgers has been somewhat unfairly pigeon-holed as an ironclad student of the tiki-taka style, he actually is a much more flexible manager than most people give him credit. The key concept to any Rodgers side is fluidity in possession. This week, we saw a tremendously fluid 4-2-3-1/4-2-2-2 setup that Rodgers attempted a few times last season. Interestingly, this system on paper is very similar to the one Kenny Dalglish tried to construct - except Rodgers has traded the power of Andy Carroll for the speed and agility of Daniel Sturridge, and the left wing width of Stewart Downing with the cutting edge between the lines of Philippe Coutinho. 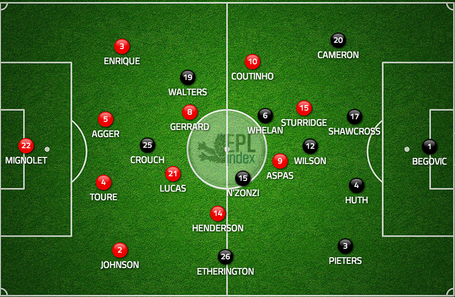 Nothing surprising here, we saw the expected back five with newcomers Simon Mignolet and Kolo Toure joining Glen Johnson, Daniel Agger, and Jose Enrique. Mignolet's game has been highlighted for his aerial wobble against Crouch in the first half and his "game-winning" penalty save in the second. In between, we got a glimpse of the first rate shot-stopping ability that moved Liverpool to sign him in the first place.

For his part, Toure cracked a header off the bar early on and then went on to have a very fine debut performance. We knew his positional sense and quickness would make him an asset, but I, for one, underestimated his ability with the ball at his feet. More importantly, for a smaller center back Toure was in no way "bullied" by the likes of Peter Crouch and Jonathan Walters. If he can do it against players like Christian Benteke and Romelu Lukaku then we'll really be in fine stead at the back.

Steven Gerrard and Lucas Leiva formed a rock solid partnership and it's what makes the entire formation tick. Gerrard's distribution from deep was first class, leading the team both in total passes and pass accuracy (87 and 91%, respectively). Meanwhile, Lucas looked sharper than we've seen him in probably 18 months. He seemed to have an extra burst in his step that was missing last year, and his team-leading total of eight tackles reflects his bulldog-like play in midfield (tangentially, I don't think Stoke's N'Zonzi-Whelan-Wilson midfield is even talented enough to play passes for Lucas to intercept). Try attempting this formation with Charlie Adam and Jay Spearing, and you understand why Dalglish's second year went down the tubes.

Out wide, we saw Phil Coutinho be Phil Coutinho. There's not much else to say that hasn't already been covered, but his ability to run play from in between the lines adds an entirely new element to the squad.

Perhaps the most interesting decision by Rodgers was to use Jordan Henderson in a tucked-in role on the right. The young Englishman desperately struggled in the same position under Dalglish and considering how much he's bounced around under Rodgers, you wonder if even the current manager knows what's Hendo's best position. We saw much of Henderson's typical play: tireless running, crisp short passes, and an underrated sense of timing on his runs from midfield. It's both a testament and indictment to Henderson's play that he could have finished with a hat trick, but came away with nothing. The kid's a player, but if he's going to play out wide (even in a narrow role), he'll need to improve his finishing.

Up front we saw newcomer Iago Aspas join Daniel Sturridge in a very fluid strike partnership. Aspas tended to drop off to link play the more often of the two, but he also happily left those responsibilities to Sturridge on several occasions.

Aspas's Gremlin impersonation wasn't half bad, even if it was more of the 2011-2012 vintage that lacked sharpness in front of goal. His movement is fantastic and he seems to revel in playing one and two touch sequences with teammates around the area.

It turned out that not only was Sturridge fit, but preposterously sharp for someone who missed almost all of pre-season with an ankle injury (makes sense that Rodgers has been raving about Sturridge's work ethic to return). His movement was smart, his runs towards goal carried menace, and his link-up play is far better than the "selfish" label too often thrown his way.

Oh, and he scored the game's only goal with a nice low strike from distance. We saw it last year, the ex-Citizen can generate enormous amounts of power without needing to wind his leg too far back. It allows him to release shots from small pockets of space and punish any defender foolish enough to drop off.

Sturridge's strike from distance in the 37th minute proved to be enough for Liverpool to get all three points, barely. Let's track the goal (click here for link to video): 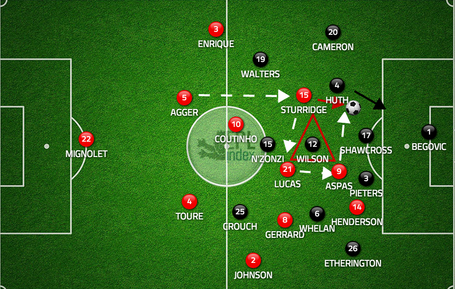 With play having rotated out from the right flank, Daniel Agger played the ball to the feet of Sturridge who had intelligently dropped into the space vacated by the midfield overload on the right. Surveying the field, Sturridge found himself nicely aligned in a triangle with Lucas and Iago Aspas that should be printed out and taped onto Melwood tactics board for the rest of the year.

The triangle formed by Sturridge-Lucas-Aspas allowed the three to navigate the congested midfield by passing through the likes of Steven N'Zonzi and Marc Wilson - both of whom ended up neither closing down the ball nor occupying a passing lane. As Lucas played the ball to Aspas, Huth was foolish enough to turn his back to Sturridge to return to Stoke's back line. Upon noting Huth's inattention, Sturridge immediately checked his run, received Aspas's inevitable return ball, and smacked the ball into the lower corner.

While a goal from distance is usually a product of individual brilliance rather than solid build up play, Sturridge's strike was actually a bit of both. Rodgers usually likes to crack the penalty area rather than let it fly from range, but the intelligent movement of Sturridge and Aspas, both Rodgers-era recruits, reflects how he's trying to build the club.