Let's take a look back to the weekend and breakdown the performance of Liverpool's number 10, Phil Coutinho. As your naked eye told you, the kid is something special.

It speaks to the remarkable impact of his January arrival that Philippe Coutinho is the current top jersey seller for Liverpool Football Club. Not the Gremlin, not the Captain - but the 21 year old from Rio with a grand total of 14 appearances in Red to his name. With the Gremlin suspended to close last season, Coutinho made a bid to become the side's puppet-master in the final third and his torment of Stoke on Saturday only re-affirmed his claim.

Taking up the position he excelled in last year, Coutinho began the match stationed on the left wing of the Reds' fluid 4-2-3-1/4-2-2-2 setup. With Rodgers's backing, the Brazilian freely roamed inside to exploit space between the Stoke lines, usually receiving the ball on the half-turn. The best indicator of Big Phil's positioning is perhaps his passing chart shown below: 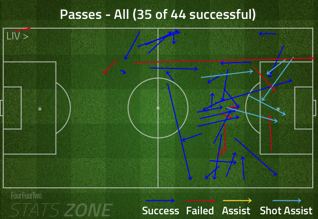 As seen above, despite being placed on the left wing, Coutinho spent most of his time successfully darting into the space between Stoke's holding midfielders (yes, all three of them) and back line. Staying with the chart, it becomes plain to the eye that Coutinho is the player charged with directing traffic in the attacking end. Per whoscored.com, the former Inter man created a team leading six scoring chances with a combination of pull-backs and through-balls into penalty area.

To get a bigger picture of Coutinho's overall contribution, let's take a look at his action chart: 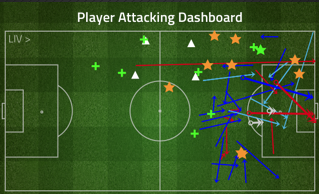 While most effective setting up his teammates, Coutinho did manage to get off five shots to threaten Stoke's impressive keeper Asmir Begovic. Despite his failure to hit the target, the Brazilian proved himself a threat from range last year, something he should look to build upon this campaign.

Another facet to Coutinho's game illustrated above is his willingness to take on defenders, unlike Stewart Downing (as gratuitous to read as it was shameless to write). He only completed one dribble, but he managed to draw a team leading four fouls, indicative of his quickness on the ball and Stoke City playing like Stoke City.

One area that Coutinho deserves more credit is his defensive contribution. People are oftentimes too eager to connect a small stature with a defensive frailty, as emphasized below: 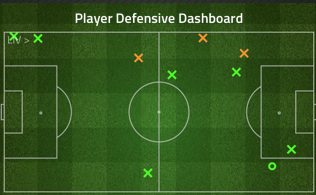 As Livepool fans will tell you, last year Coutinho demonstrated a tremendous willingness to close down the opposition and his performance on the weekend was no shock. His tally of six tackles was second only to holding midfielder Lucas Leiva and a major boon to Rodgers who can count upon his chief creator to also be a diligent defender.

Overall, it comes as no surprise to see Coutinho's influence supported by the numbers. The diminutive playmaker has rapidly developed into one of Liverpool's most crucial players and is on his way to becoming one of the major stars of the Premier League.