Welcome to Tactics Tuesday, the first of a new running feature here on Anfield Asylum, where, as you may have guilefully guessed, we do two things: talk tactics and advance alliteration.

Your time is near, the mission's clear...

Well, the boys in Red have returned from Scotland which means we are finally, mercifully at the end of the barren summer months. We can all stop pretending to be enraptured by the Confederations Cup and motley assortment of U-whatever tournaments featuring half empty stadia and Stuart Pearce's gentle sobbing.

Regretfully, the Gremlin's Transfer Saga rumbles on as some sort of ongoing trial by fire of my sanity but since the giggling minotaur in my apartment has given me the green light, I'm pleased to launch the inaugural Tactics Tuesday. Usually, this will feature a tactical breakdown of LFC's most recent match, but today's will be a more forward-looking batch of questions and predictions for the beginning of the season.

A case for the defense:

Despite my serious misgivings, all signs are pointing to an Agger-Toure partnership in central defense for at least the first few fixtures. Jamie Carragher's brand of Scouse is off to befuddle closed captioning, Martin Skrtel has become Exhibit A in "when should you decide to sell high," and Seb Coates is adapting well to his non-playing role as Phil Coutinho's translator. While I will still loudly and proudly beat my drum and petition for Martin Kelly's appearance in the center, I have resigned myself to begrudgingly supporting the Agger-Toure axis while reserving the right to sarcastically undermine its very existence.

Since I'm now firmly behind the plan, I'll admit that, despite Toure's age, by all accounts he appears to be in top shape and an earnest worker on the training ground. That he is certainly more fleet of foot than the now-retired Lieutenant will hopefully allow the defense to hold a higher line than we saw over the second half of last year. As has been impressed upon me by my cohort loyal2reds, winning the ball back in the opposition half is strongly correlated to positive results and a higher line will go a long way towards this end.

Whether Toure is still of sufficient class to render irrelevant the purchase of a stopper approaching his peak I will leave alone for now. Positional awareness and tactical discipline come at a premium when manning a back line with Glen Johnson and Jose Enrique, and it's these two traits that we'll have to content ourselves with for the time being.

Hendo vs. Allen: Who ya got?

With Lucas and el Capitan locked in for two of the starting midfield berths, we're getting to decision time on the battle between Jordan Henderson and Joe Allen for the final spot.

I've already covered Allen's disappointing debut season and pre-season has so far justified my faith in the Welshman's ability to bounce back. Fully fit and crisp on the ball from the get-go, Allen looks a rejuvenated figure from the worn out zombie we saw trudge off the field last winter.

So with all that praise, you'd figure Allen would be a shoe-in to complete the midfield equation but Hendo's continued development makes it a difficult question to answer. It's been confusingly great to watch the young Englishman's confidence surge under a manager who didn't initially rate him, after Kenny Dalglish's unconditional love only served to create a downtrodden puppy.

Henderson's tremendous athletic ability has never been up for debate, but his blossoming mental fortitude has slowly won over the Anfield faithful. That he looks set to outlast Stew Downing (you can bet your ass I'm going to keep sending barbs his way whether he's with LFC or not) as the sole survivor of Dalglish and Damien Comolli's ill-conceived British dream team and was recently christened with the armband in Norway speaks to the respect even his current manager now holds for him.

Since that damn minotaur is forcing me at trident-point into making a prediction, I'd say Allen gets the start on opening day and, in full disclosure, some of it has to do with the gaffer proving himself right. For my money, Henderson's combination of speed and power nicely rounded out last year's midfield and a return to the starting eleven could beckon by September.

While we're on the subject of tridents:

Since the Gremlin is suspended for the first six matches, the construction of the attack goes on without him and the world is saved the expletive-laden diatribe lurking in the recesses of my mind.

On a brighter note, let's start by penciling Phil Coutinho into that left wing role he occupied so well last season. From there, the Brazilian had full license to roam inside and wreak havoc between the lines, while never neglecting his defensive responsibilities. I desperately want to write about tempering expectations for the 21 year old, but Coutinho showed such brilliance last year that one cannot look at the impending season with anything but sky high projections.

What I find most impressive about Coutinho's play is a truly remarkable appreciation of space for someone with such limited top-flight experience. Many players have the quick feet and close control to exploit existing space, but very few have the ability to recognize how they can create space where there currently is none. The first examples that come to mind are the second and third goals in the 6-0 thrashing of Newcastle last April.

For Liverpool's second (a tap in by Henderson after Sturridge's square pass) Coutinho stared down Henderson's developing run from midfield, drawing the attention of Newcastle's center back, Steven Taylor. Once Taylor slid over to prevent Henderson's release, Coutinho immediately played Sturridge down the now vacated seam. That he made the pass by flicking the ball with the outside of his right boot only emphasizes his technical quality. 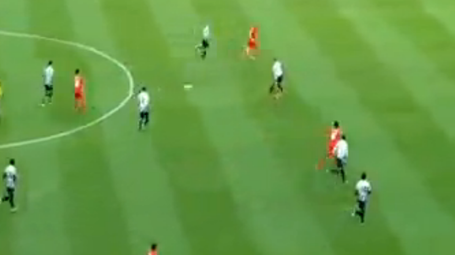 For the Reds' third (an emphatic Sturridge pile-driver into the top of the net), Coutinho bulldozed Hatem Ben Arfa before galloping off at pace in possession. The former Inter player then refused to play in Sturridge until he committed both Taylor and fellow center back Mapou Yanga-M'Biwa to stopping his run. Again, Coutinho's final touch, a gently lofted through ball, was sublime, but to me it is his ability to manipulate space that makes him so exciting to watch. 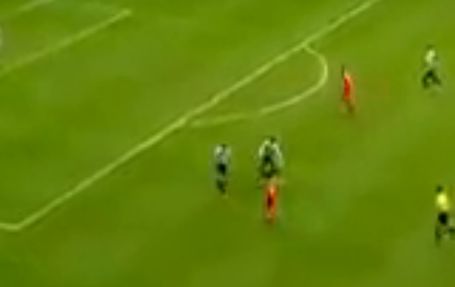 With the Gremlin out, Sturridge's ability to fire right from the start becomes a huge component of Liverpool's early form. 10 goals from 14 appearances is a quality return for his first Liverpool season, but that the goals tended to come in bunches meant you couldn't be quite sure of a consistent threat.

Obviously, a full pre-season would have gone some ways towards ensuring a dynamic start, but I still retain confidence in the Birmingham-born striker's ability to bring more consistency to his play as the year wears on. There's absolutely a top-level striker inside Sturridge, and I think he has the right balance of self-belief and willingness to play within the team for him to reach his potential.

...and its knock-on effect:

It's a safe bet we see Iago Aspas in the starting eleven against Stoke, the only question is whether it's up top or out on the right. If Sturridge is fit, problem solved and we have a Coutinho-Sturridge-Aspas front three that, in my mind, is absolutely capable of firing the club to a top four finish. A top-level creator, a top-level finisher, and a hybrid Inside-Forward type to provide a bit of both. If Sturridge is unfit however, the question box opens up and Fabio Borini's face pops out.

Now, I genuinely like Borini. His work rate is second to none and he has a sharp eye for runs off the ball that open up space for his teammates. If he can soften his first touch and find some assuredness in the penalty area, we'll be looking at a hell of a player - perhaps a more dynamic Dirk Kuyt considering Borini's superior pace off the mark.

But the Borini we saw last year, in a season pockmarked by injuries it should be said, was not capable of leading the attack of a Champions League caliber team. If the young Italian is afforded the chance to spell Sturridge and Aspas as he works upon his composure with the ball, Liverpool suddenly has a healthy arsenal of attacking options.

Yet, if he's counted upon to provide the final touch in the absences of the Gremlin and Sturridge, Liverpool could find itself in a hole by October. The season's here and after the nastiness of this summer, Champions League qualification certainly seems like the mission.

Here's my guess at Rodgers's preferred team sheet for the season's opening stretch: 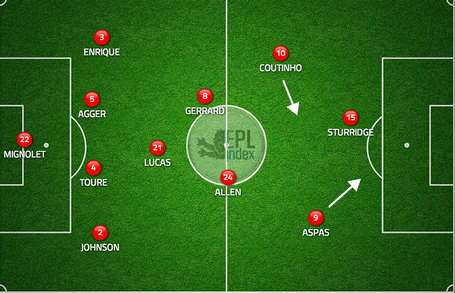