Suarez Accepts His Ban - Is He Coming Back?

More than likely, the answer is yes based on today's comments.

If you buy something from an SB Nation link, Vox Media may earn a commission. See our ethics statement.

Share All sharing options for: Suarez Accepts His Ban - Is He Coming Back?

Luis Suarez has decided not to appeal his ban. In doing so, he will be suspended for the remaining 4 games of this season and the first 6 domestic matches of next season. It seems clear that he is not overly thrilled, but apparently a consenus was reached that this was the best course of action for the club and Suarez. He released this statement on his facebook page after writing, "Hello to everyone, I wanted to share this statement with all of you. Thanks for your support" : 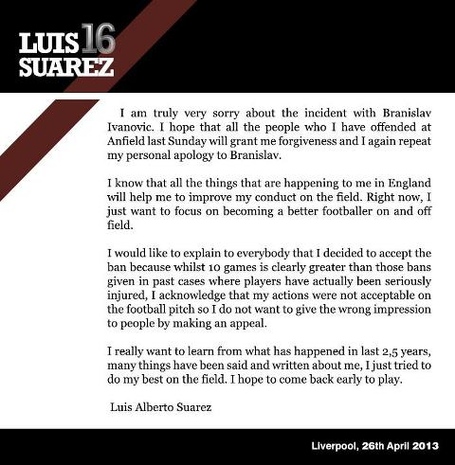 This does seem to bode well for his future at Anfield as he does allude to coming back. In addition it is nice to see that he appears quite contrite and owns up to his actions.

However, this still doesn't excuse the FA's logic. Liverpool have been given the reasoning behind the FA's decision. How much that came into play in their decision not to appeal we may never know. However, the FA did state, ""The FA intends to publicise the Independent Regulatory Commission's written reasons in due course." Yeah, whatever the hell that means. Why they won't release it now I don't quite understand. Surely Liverpool fans will be just as pissed in a month about it.

We are all disappointed at the severity of the punishment and in particular the differing standards that have been applied across various previous incidents.

Luis is an important member of our team and nothing has changed in that regard.

We are committed to helping him improve his conduct and he will be given our full support. We look forward to him returning to the team next season when he is available for selection.

We can't hide our disappointment at the outcome of this situation, but we have to move on and support Luis in his decision.

Luis has made a huge contribution to the squad this season and we respect his decision to accept the ban.

"He will be missed for the remainder of this season and the early part of next, but we will have the opportunity to welcome a better person and player when he returns.

So there you have it, the end of the drama...for now. Hopefully this is the last time I write about this until I have to dissect the FA's logic again. Now, it is time to focus on the task at hand, finishing above Everton and the next match against Nouveaux Chateau.