This is Tactics Tuesday. If you enjoy screaming babies on airplanes, watching car crashes on the freeway, or supporting Arsenal...welcome home.

Share All sharing options for: Tactics Tuesday: Fear and Loathing in Ozil's Den

Sometimes sitting down Monday afternoon to review passing charts, team sheets, and Match of the Day video clips is quite a bit of fun. I stuff myself with second helpings of a Reds' victory, fiddle around on stats applications to show why Philippe Coutinho is a genius, and do a bit of writing as well.

Unfortunately, yesterday was not one of those days. On the weekend Liverpool was thoroughly outplayed by Arsenal, Brendan Rodgers thoroughly outmanaged by Arsene Wenger, and Philippe Coutinho shown to be quite mortal after all. Saturday's loss was an ugly affair and having to break it down bit-by-bit was akin to bare-handedly sifting through dog shit after your beloved pup swallowed a wedding ring.

With that imagery a tragically suitable appetizer for the following main course, I feel you've been fairly warned. We're gonna go "First Half, Second Half" on this one and use both Arsenal goals to demonstrate the weaknesses of each system.

First Half and Starting Lineups 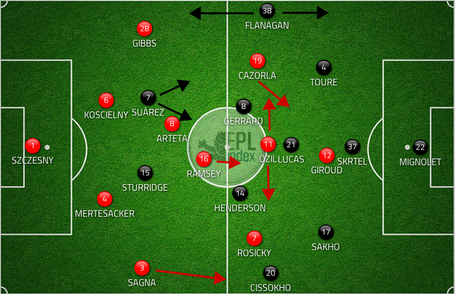 Considering Arsenal have played some variation of a 4-3-3 since Wenger was hired during the Paleolithic Era and the Gunners are beset by a rash of injuries, the layout and personnel of their starting eleven raised no eyebrows.

Simon Mignolet was in net with the three-man central defense of Kolo Toure, Martin Skrtel, and Mamadou Sakho. In the wing back roles, Jose Enrique's continued absence means our continued exposure to Aly Cissokho's entire lack of a footballing brain. Meanwhile on the right side, Glen Johnson's serious illness meant Jon Flanagan was hastily recalled from Siberia to play as a right wing back.

Midfield continued with the tweak we saw against West Brom with Lucas playing an anchor role to allow both Steven Gerrard and Jordan Henderson to move forward. Up top, Daniel Sturridge and Luis Suarez continued their strike partnership.

The current beauty of Arsenal's system is that even when playing five "inside" midfielders (some play deeper like Arteta others more advanced like Cazorla, but they all love the center of the pitch), the intelligence and ensuing movement of these players prevents its play from getting overly congested inside.

Indeed, Santi Cazorla did his usual routine of cutting between the lines and providing a menace in the final third. Deeper, Aaron Ramsey did a fantastic job as a box-to-box midfielder-both helping Arteta defensively, six tackles and two interceptions, and then moving forward when in attack...that goal. 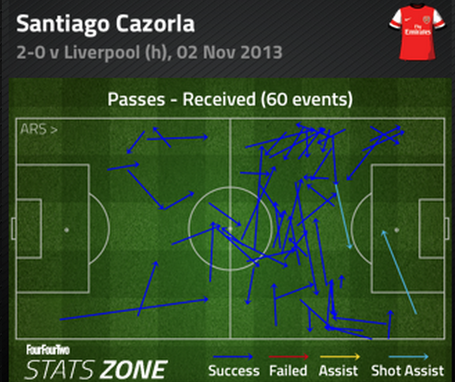 However, the other midfielders smartly compensated for this movement with their own positioning. Tomas Rosicky noticeably stayed further wide on the right than we're used to seeing from the versatile Czech. Meanwhile, despite some claiming Mesut Ozil had a quiet game, it was to some extent his role as a "central winger" that pulled the whole formation together. His ability to recognize space is on different level and his intelligent movement side-to-side has been the glue at both Arsenal and Real Madrid before it. 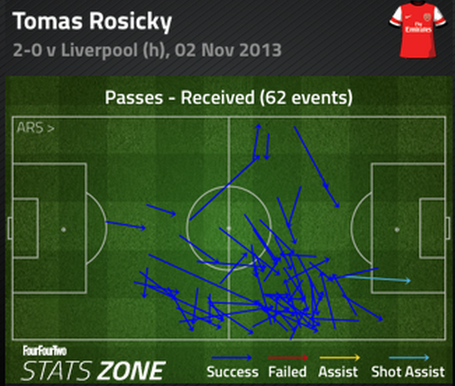 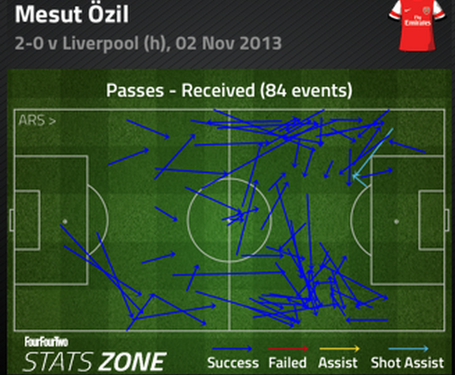 Also, some praise must be sent to the aforementioned Arteta who had a performance even fellow Basque-icon Xabi Alonso would have admired. Impeccably tidy service (the game's leading passer) along with seven tackles and two interceptions from a deep station between Liverpool's midfield and attack.

With Giroud playing a determined target role, Liverpool's spare center backs of Sakho and Toure were unsure how to play. They could either help Skrtel shadow Giroud and leave the midfield overrun (something for which Toure received an earful by Gerrard), or step up to help fight in midfield and risk exposing Skrtel alone against the Frenchman.

Compounding matters, both Arsenal full backs, particularly Sagna, worked to get forward down the touchlines. Had they stayed deeper, Flanagan and Cissokho would have been unoccupied and able to contribute more narrowly in the midfield battle. 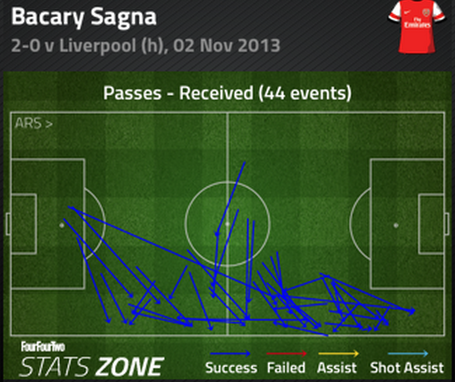 The combination of excellent midfield rotation and forward thrust by the full backs bore fruit on Arsenal's opening goal. Cissokho was caught flossing his teeth as Sagna was played behind him down the right channel. Giroud's direct run at goal was covered at the near side by Skrtel but Toure decided to try and totally squeeze off the striker's goal threat. Cazorla's late run to the area was thus left totally unmarked. 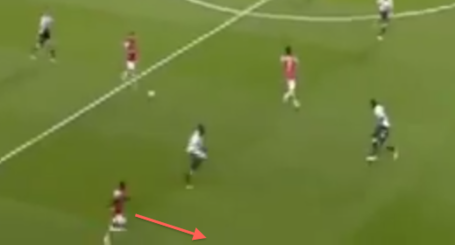 The Spaniard may have gotten a bit lucky that his rebound off the post came right back to him, but his fantastic technique on the volley and the overall victory of Arsenal's system meant the goal was deserved.

Overall, the statistics weren't too unkind to Liverpool in terms of shots, possession, passing percentages and the like. But the graphic I want to throw your way is the breakdown of action zones across the pitch. At full-time, the busiest zone on the pitch, at 17%, was the central area just outside Liverpool's 18-yard box (it was actually over 18% at half time). This is the most dangerous area on the field and should help provide some context to what was a somewhat even possession battle. Not all possession is created equal, and Arsenal's system kept the ball in a very advantageous area of the pitch. 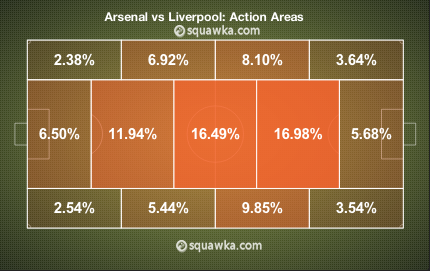 The Reds' goal threat largely came through direct play in the first half.

Jordan Henderson squandered an early chance to give Liverpool the lead when he picked up possession near the halfway line, ran directly at goal, and gently returned the ball to Szczesny.

Soon after Arsenal's opener, the Reds had a golden opportunity squandered by the continued incompetence of Martin Atkinson. Like a pride of lions taking down an elephant, Sagna jumped on Suarez's back and cynically brought him down to end a dangerous Liverpool counter.

Smartly, Suarez jumped to his feet, played the ball from the spot of the foul very quickly, and Sturridge squared to a wide open Henderson who tapped past Szczesny. Unfortunately, for once, the much-maligned "cheater" Suarez had a better grasp of the rules than the referee who insisted play be brought back so he could issue a yellow card to Sagna and punish Liverpool twice for the same crime. Good stuff.

As an overall system, the Reds struggled to control play for any serious stretch. Besides those two direct chances by Henderson, the Hendo-Gerrard midfield was too busy trying to contend with Arsenal's buzzing midfielders to move forward alongside play like against West Brom 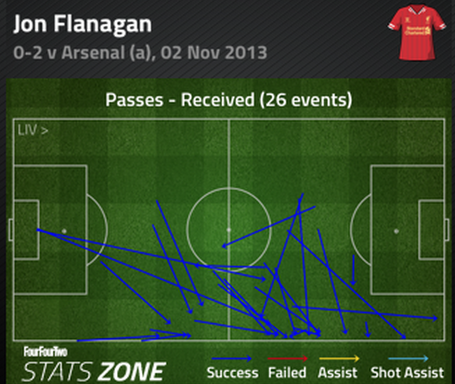 The only real positive came from the right flank where Flanagan did a decent job moving up the field to stretch play. Even though he played a rather simple game, his positioning alone was a positive for the Reds and most of their first half play, including the link-up work of Suarez, was directed down the right side.

On the other side, Cissokho was nonexistent and is starting to show why he has disappointed at Lyon and Valencia after having been such a hot prospect at Porto.

A switch at half-time to the 4-2-2-2/4-2-3-1 hybrid we saw earlier in the year seemed a logical option and Rodgers did take this route. Coutinho came on for Cissokho which meant Sakho shifted to left back (yes, Cissokho was so lost at sea that Rodgers preferred playing Sakho out of position to continuing with Cissokho) and the Brazilian took up the left flank. Jordan Henderson shifted over to his narrow right midfielder role, while Suarez took up the slot that used to be filled by Iago Aspas (remember him??) just off of Sturridge. 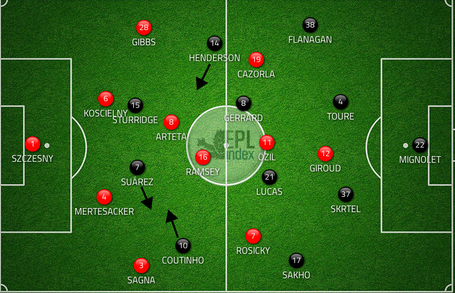 There were signs of real rust to Coutinho's game-to be expected after a lengthy injury lay off-and his passes in the final third were a bit heavy. Regardless, there was a stark shift in Liverpool's attacking and a 10-minute stretch just after half-time where an equalizer looked quite possible. 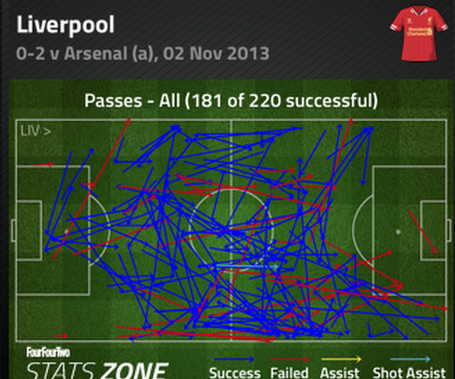 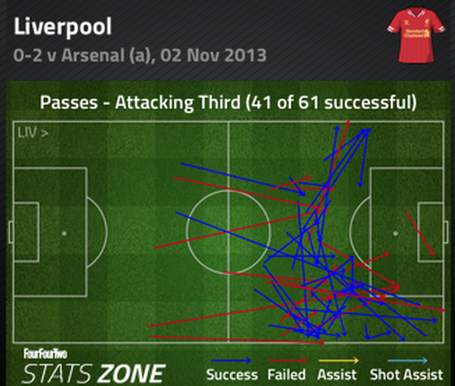 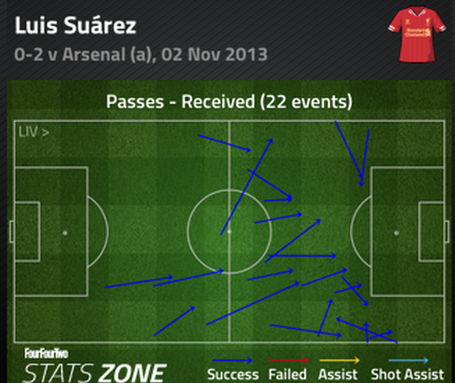 Liverpool's attacking threat switched from the right flank over the left, where Coutinho and Suarez looked to interchange as frequently as possible. Suarez received six passes from Coutinho in 45 minutes, the third highest total behind the seven he received from Lucas and Henderson respectively over the full match. 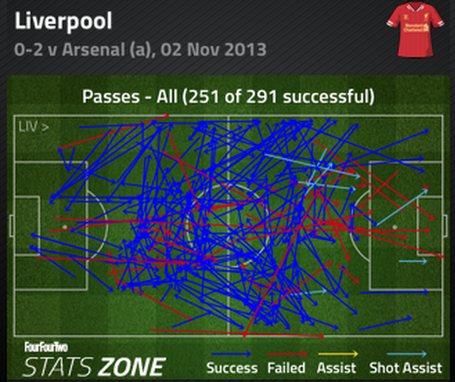 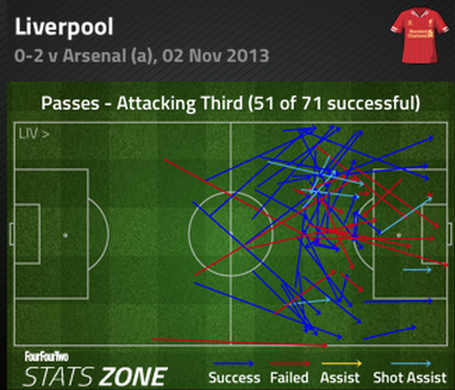 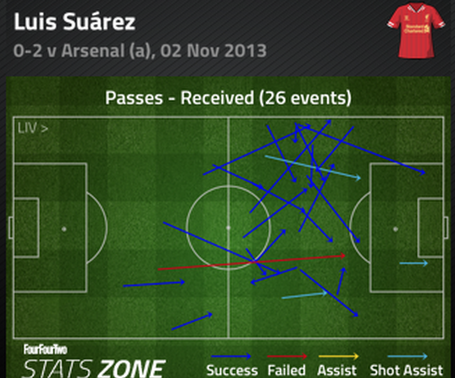 The Reds were busier in the final third and created nine of their 10 chances in the second half of play, but they were still unable to breach the rearguard of Mertesacker and Koscielny. Sturridge in particular never really got into the game despite registering three shots (two on target). Going into the match, I thought Sturridge and Suarez could best the Koscielny-Mertesacker partnership but the duo continue to be a solid bedrock for Arsenal.

Koscielny is happy to stick tight and follow strikers into midfield. Indeed, Suarez and Sturridge went a combined 5/16 with dribble attempts, with most coming on the right side of the pitch against Koscielny. Mertesacker was much less busy, but, despite being slow-footed, does a tremendous job reading play and closing gaps behind. 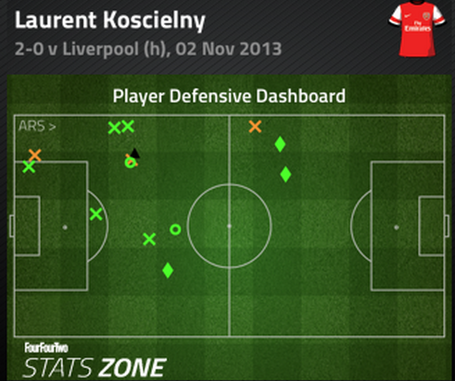 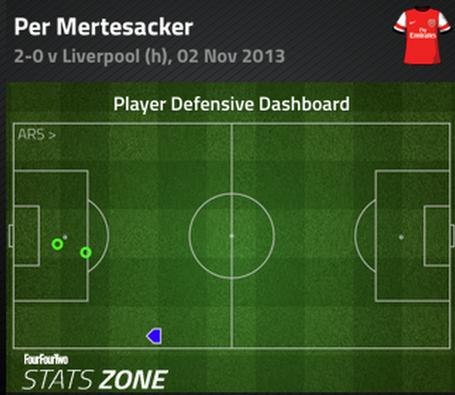 Liverpool controlled play to kick off the second half, but Arsenal soon got a grip by retaining possession through its stronger numbers in midfield. At this point, Rodgers was let down not by his tactics, but by his personnel.

Lucas and Gerrard have both shown serious signs of fatigue over the early season, even without the distraction of midweek cup competition. Dating back to last year, Rodgers has a clear determination to play Gerrard as much as possible and it's starting to really hinder the Captain's ability to control games.

The switch to a 4-2-2-2/4-2-3-1 was the correct one and Liverpool's play overall was improved. The only drawback to this system is the burden it placed on the central midfield pairing which had to contend with three natural central midfielders, and then the extra potential of Cazorla and Rosicky to receive the ball inside. With Lucas and Gerrard chasing shadows, they rapidly began tiring and struggled to cope with Arsenal's movement.

The result of this, beside Liverpool struggling to maintain the momentum it displayed to kick off the half, was Ramsey's goal from just outside Liverpool's 18. That man Ozil pulled over toward an already crowded right channel, bringing Gerrard and Lucas along for the ride. As he had done all game long, Ramsey moved forward from midfield, and the German's return ball was directly into the space vacated by Liverpool's holding duo.

Acres of space and the Welshman's blistering form are a horrid combination for Liverpool, and he duly sent the ball into the back of the net. Game over.

So, lots to digest here and not much of it positive for Liverpool supporters. The three-man defense was clearly a poor choice for this fixture and Liverpool's relative lack of attacking depth meant that a 45 minute cameo of genius from the recovering Coutinho was needed to try and save the game.

Also, Rodgers needs to rotate out Gerrard and, to a lesser extent, Lucas. There's no shame in giving El Capitan a breather every now and then, and Joe Allen is chomping at the bit to get another run in the first team.

On the flip side, losing 2-0 away at the in-form team in the division isn't a horror show unto itself. Toss in the fact that Liverpool could have had an early lead through Henderson and should have had an equalizer save for Atkinson's foolishness, and maybe it's a different result entirely.