Tactics Tuesday: The Triumphant Return of "Death by Football."

Following the insipid defeat to Ratatouille's crew in the Emirates, a visit from struggling Fulham demanded a response by the boys in Red...and the boys in Red stepped up to the bar.

Share All sharing options for: Tactics Tuesday: The Triumphant Return of "Death by Football."

From the opening whistle to the close of the second frame, the Reds pinned Martin Jol's side against the ropes and only stopped delivering body shots when it was time to mix in an uppercut to the jaw.  It was relentless, it was a release of the previous week's frustration, and, above all, it was the return of "Death by Football."

The return of the four man backline in front of Simon Mignolet also saw the return of Daniel Agger to the starting 11.  He partnered Martin Skrtel in between full backs Glen Johnson and Aly Cissokho.  In the center of midfield, Lucas and Steven Gerrard continued to work out the kinks in their developing partnership.  Meanwhile out wide, Jordan Henderson reprised his role on the right flank and the left flank housed Phil Coutinho's first start since Swansea.  Daniel Sturridge and Luis Suarez continued up top, with the Uruguayan given free reign to drop into midfield and break forward beyond the back line.

On the other side, Maarten Stekelenburg was tasked with plugging the dam that was Fulham's net.  Elsad Zverotic, Philippe Senderos, Fernando "Double Agent" Amorebieta, and Kieran Richardson were sheeps to the slaughter as a defensive unit.  The midfield trio consisted of Scott Parker and Steve Sidwell in holding roles with Patjim Kasami tasked with a box-to-box role that never proved feasible.

Ashkan Dejagah manned the right flank while Roy Hodgson cast-off and Paul Konchesky trade-bait Alexander Kacaniklic took the left.  Up top, Dimitar Berbatov finally perfected his "possum striker" role and received a nasty jolt from a defibrillator for his troubles. 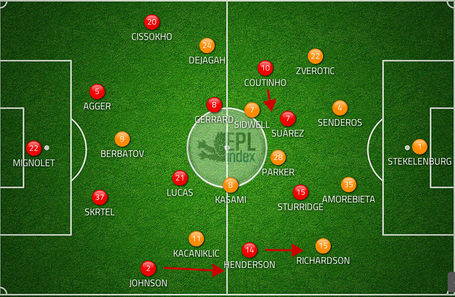 The defense did not have all that much to contend with over the course of the match, but there are still some observations to make.

It's hard to find any Liverpool fan who thinks poorly of Daniel Agger and, despite my comparison over at EPL Index (which stated a Skrtel-Sakho parternship may be the way forward), I was pleased to see the Dane return to the side.  This was Agger's fourth "90 minute" performance of the season and they've all resulted in a Liverpool clean sheet.  In high school statistics I was repeatedly told "correlation does not equal causation" but you can be the one to tell that to Mr. Agger.

Meanwhile, the comparison between the full backs was pretty stark.  Liverpool's total control meant this was a prime showing for Johnson, who bombed forward relentlessly as an auxiliary winger.  Liverpool's attacks were heavily weighted down the right flank and we were served a reminder of the former Portsmouth man's importance to the side.

On the other side, Aly Cissokho was essentially a passenger for 60 minutes before being lifted for Jose Enrique (who mercifully seems close to a return).  As an aside to anyone looking for some action, I'm willing to put big money against very reasonable odds that Cissokho's buy-option is not activated and we see a healthy dose of Jack Robinson next season (unless of course Christian Purslow makes a miraculous return to the front office, at which point all bets are off).

The basis of "Death by Football" is control of the center of the park and Liverpool's midfield held the game in a vice-grip from the very start.

First, while many want to see Coutinho in the center of the park, I actually like his role cutting in from the left wing as it allows him to consistently receive the ball on the half-turn.  As you can see by his passes received chart, he is still able to roam between the lines across the entire field and then play direct passes in the final third.  In this match he seemed overly focused on getting on the score sheet, with nine shots total and many from a great distance out, but I expect his performance levels to rise as he returns to full match sharpness. 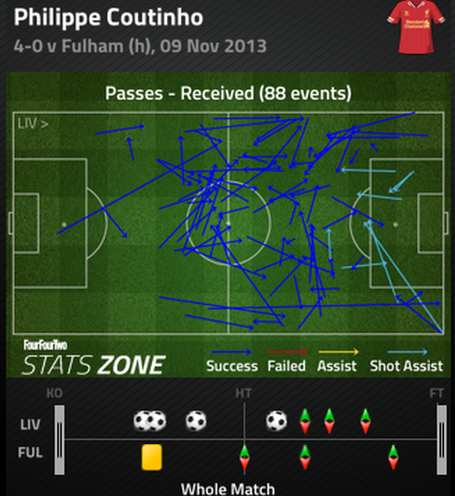 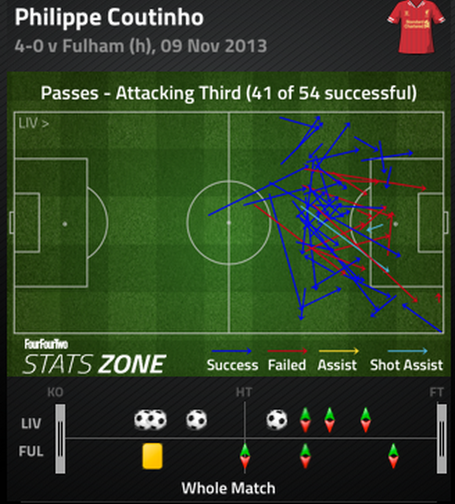 Meanwhile on the right side, Henderson played much wider than usual but this was simply a reflection of where Liverpool's play was slanted.  With Coutinho cutting over and Johnson bombing on past him, Henderson found himself playing a link-up role as opposed to operating as another scrapper deep in midfield.  He played the part well, six key passes, and his sumptuous through ball for Suarez's first goal showed a cutting edge all too often missing from Hendo's repertoire.

After struggling against Arsenal, Gerrard enjoyed playing against Fulham's decaffeinated midfield.  He kept play ticking over nicely and his delivery from set-pieces was world class.  He finished with two assists-one for Martin Skrtel's header from a corner, the other for Suarez's second-but he should have had three for Amorebieta's own goal opener.

We're best able to bridge a strong midfield performance and strong team performance through the showing of Lucas in the center of the park.  After being passed around by Arsenal's midfield the weekend before, the Brazilian did an excellent job of sealing play into Fulham's half of the pitch. 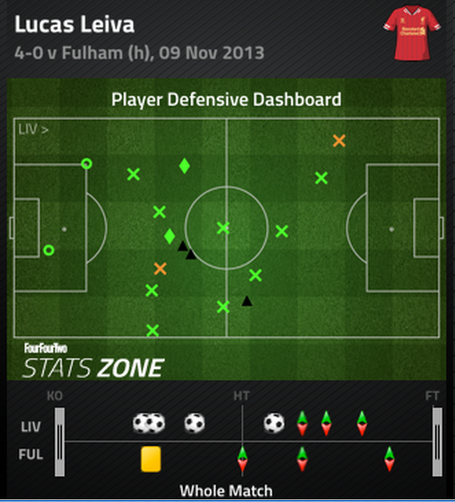 Lucas's efforts proved an effective bedrock for the rest of Liverpool's press and the Reds were able to squeeze the game with high-tempo harrying for 90 minutes.  This was encompassed by the Reds fourth goal which saw Gerrard and Henderson mercilessly chase down a terrified Richardson in his own half. 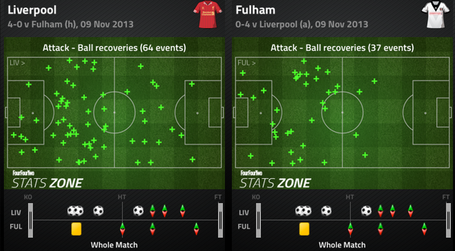 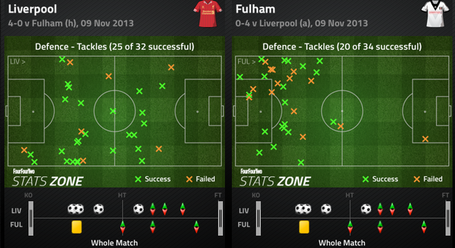 Last week, I noted how Arsenal's control of the game was summarized by holding possession in the zone just outside Liverpool's 18.  This week, the Reds' ruthless pressing and overall dominance saw the following passing chart and action zones: 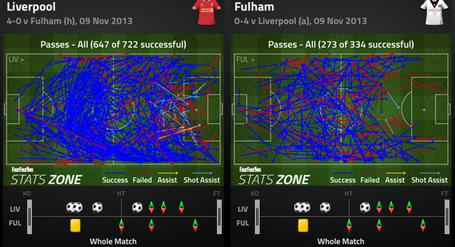 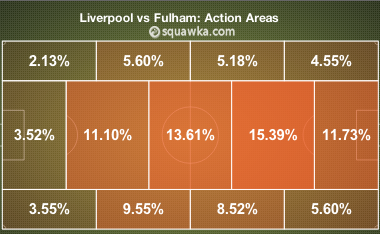 With the defense rarely threatened and midfield in total control, the stage was set for Daniel Sturridge and Luis Suarez to torment Fulham's defense, but only Suarez really delivered.  The Uruguayan recorded ten shots, created six chances, completed four out of 11 dribbles, and, of course, notched two goals.

For the first time however, we also saw a strain in the Sturridge-Suarez partnership.  Adam made some great observations in the recap that Sturridge didn't come over to celebrate Suarez's second and increasingly sought to get himself on the score sheet.

I won't attempt to play psychiatrist, but will say that Coutinho has some blood on his hands here with his nine shot attempts.  Like a good point guard in basketball, the Brazilian should be cognizant of spreading around touches for his teammates and less focused on getting his.

Death by Football in its purest form as Liverpool dominated every facet of play.  A couple weeks back I mused over whether this side had an identity, whether Rodgers had abandoned trying to implement his press-possession philosophy in favor of a pragmatic counter-attacking approach.  While it is dangerous to read so much into a small sample, I think the last three games have actually told us something.

Against West Brom and Fulham, we've seen Liverpool control play and dominate from start to finish.  Indeed, against West Brom it should have been another 4-0 home victory, bar that ridiculous penalty, and it would have come using the 3-4-1-2.

The Arsenal match, of course, went poorly and I disagreed with Rodgers application of the 3-4-1-2.  However, had Henderson buried his first chance or had Atkinson allowed Henderson's equalizer, we could be talking about a very effective counter-attacking performance away from home.

Again, three games are a small sample but if Liverpool can effectively alternate between dominating smaller teams and counter-attacking against rivals, the Reds will be capable of taking three points from every match they play.  Now, lets sit back and watch Luis Suarez fly around the world for yet another damn international break.