Tactics Time Today. Liverpool are joint top of the table, life is pretty fine if you're a Red.

Well, Brendan Rodgers persisted with the three man back line and Liverpool turned in a dominant 45 minute performance that was enough for all three points. Sometimes I wonder what would have happened to my sanity if I had written this column during the days of Roy Hodgson. Would writing about "two deep banks of four" every week turn me into Nicholson from "The Shining?" Questions we'll never need to answer. Liverpool is top, The Gremlin's back, and Jordan Henderson is a freak of nature.

Very similar from Liverpool and, as many of our astute commentators have pointed out, the formation is helping the Reds manage a moderate injury crisis (for a full-blown one check out Borussia Dortmund, yikes). Simon Mignolet is strengthening his World Cup claims in goal. Kolo Toure-Martin Skrtel-Mamadou Sakho is still an exceptionally well-balanced back three with speed, power, and technique in abundance.

The midfield saw some changes due to Lucas's remarkable yellow card accumulation - Jordan Henderson shifted inside to the holding role next to Gerrard while Raheem Sterling came into the side as the right sided midfielder/wingback. Jose Enrique did his thing on the left flank once more.

Victor Moses kept his energetic role between midfield and attack, while Daniel Sturridge and Luis Suarez got another chance to show they form the best strike partnership in the league (they took the chance if you hadn't heard).

For Palace, it was a 4-3-3 formation with Julian Speroni in goal protected by a back four of Dean Moxey, Damien Delaney, Adrian Mariappa, and Joel Ward. Ian Holloway's midfield featured Stuart O'Keefe, Jason Puncheon, and captain Mile Jedinak in a holding role. Up front, Cameron Jerome was the central striker supported by Jimmy Kebe and Marouane Chamakh. 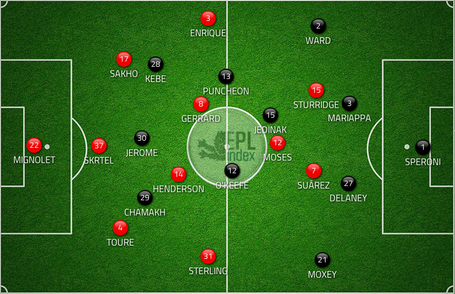 An interesting comparison to the Sunderland contest. For those that read last week's TT, you would know that a 4-3-3 can cause a lot of problems to a three man backline if the wingers insist on staying wide and stretching play. Either the "outside" center backs are isolated toward the touchline, or the wing backs are pinned back to help.

Well, that didn't happen here and it was either a combination of poor tactics from Holloway or just lesser individual quality from Palace (yes, Sunderland are bottom of the table but Emanuele Giaccherini, Adam Johnson, and Ki Sung-Yeung would walk into this Palace side). Both Kebe and especially Chamakh stayed quite narrow and Palace utterly failed to stretch/push back Liverpool's defense in the first half. 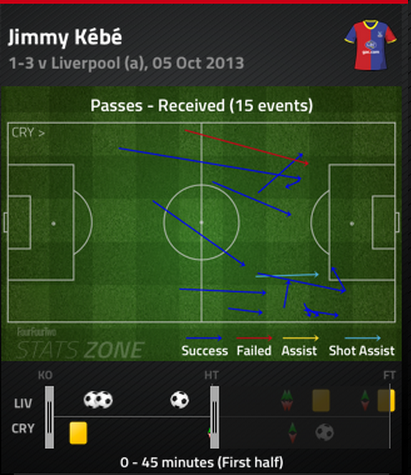 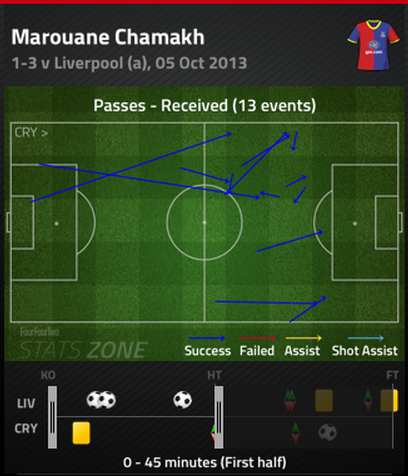 Everything was quite comfortable for Toure-Skrtel-Sakho with 24/24 successful clearances as a unit and 90, 95, and 91 percent respective pass completion rates. Yet again, Sakho was the pick of the litter for me and he seems to be growing more and more comfortable every game. For most players, switching clubs, leagues, and languages is a trying transition (or just one of the three if you're Stewart Downing), but Sakho seems totally unburdened after his move from PSG. A real Red Terror if I've ever seen one. 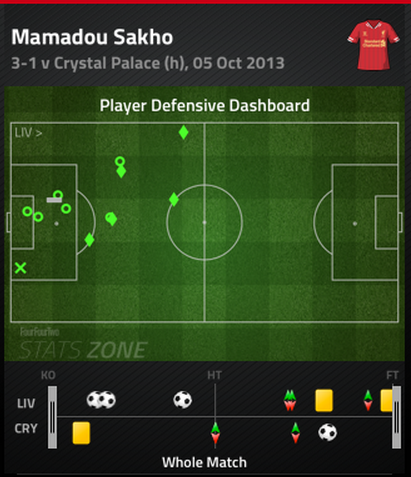 This plays upon the above in that with Chamakh and Kebe narrow/ineffective, Enrique and especially Sterling were not put under too much duress. Indeed, Holloway lifted Kebe and Jerome at half-time, bringing on Dwight Gayle and Jose Campana, and moving Chamakh central. Though the game was more even after the break, I attribute it to Liverpool switching off more than this change - it simply made Palace narrower and the Eagles' lone goal came from a set play.

A solid plan of attack, to this author's infallible senses, would have been to test Raheem Sterling's defensive commitment at every opportunity. The youngster had a tendency to switch off after his man made a pass, failing to track an ensuing run off the ball, but overall did his job quite well. He may have failed in all five of his cross attempts, but he still recorded four tackles, four key passes, and two dribbles. Moreover, he successfully executed his assignment of bridging defense and attack on the right side. He received 20 passes from Toure, 14 from Gerrard, and eight from Henderson while he played 11 passes to Gerrard, 10 to Suarez, and nine to Sturridge. A solid if unspectacular game.

Enrique was Enrique and a wing back role suits him quite well. He gets extra support from his local defender, even better that its Sakho, and this helps him cover his inevitable once-a-game brain fart (a juvenile term but an apt one I think) - his obscene midfield turnover in the second half highlighting this tendency.

Gerrard did his Gerrard-ian thing, dictating play and orchestrating Liverpool's attacks from deep. He led the Reds in passing and even snatched himself a penalty goal that I found quite amusing. Speroni energetically attempted to put him off with wild movement and arm flailing, Gerrard simply sent it home and didn't so much as crack a smile afterward. Cool as a cucumber.

The real story however, was the play of Jordan Henderson in his more natural central midfield role while deputizing for Lucas. As Adam pointed out in yesterday's Player Ratings, he may just have out-Lucased Lucas. Seven tackles, two interceptions, four of four clearances, two shots blocked point out a dynamo defensive performance - particularly after Palace's half-time switch which, although not particularly effective, gave Holloway's crew a further numerical advantage in midfield.

On the offensive side, Henderson was 68/74 passing (a meager 92% for those scoring at home), and completed a very impressive 12/13 long passes. An absolutely fantastic showing all the way around. 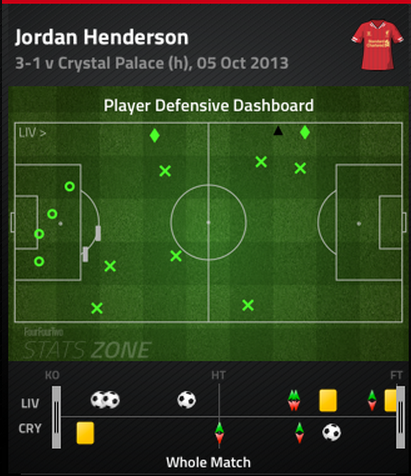 A quick word on Palace's midfield, O'Keefe and Puncheon are nothing special, but Holloway may want to revisit a Campaña-Jedinak base. I sang the praises of Jedinak over at EPL Index, and Campaña's assured distribution ability would make for a nice pairing. All is not lost for the Eagles (well, it actually might be too late but still).

As for Victor Moses, I want Phil Coutinho back and I wanted him back yesterday. That is all.

In attack we saw two splendid goals from Liverpool's strike pairing and it's just a blast to watch Sturridge-Suarez in action. Suarez's first while falling to ground shows that he may possess super-human levels of concentration in tight areas, and Sturridge's step-over festival and ensuing hammer strike to the far corner was...swashbuckling? Yes, I'll stick with it.

Tactically, it's worth noting how flexible these two players are. Last week, Sturridge was creator and link man while Suarez worked the channels and finished with two goals. This week, the two swapped roles but rather than this be some instruction from Rodgers, I think it was just the pair taking what was available.

No key passes and just two dribbles for Sturridge, but he smacked four of his five shots on target and still kept an 86% passing accuracy in his advanced position. Suarez on the other hand, recorded three key passes, went five from 12 of his dribble attempts (not exactly the epitome of efficiency it should be said), and recorded just two shots. 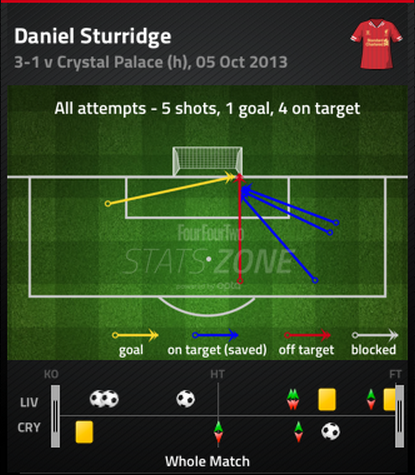 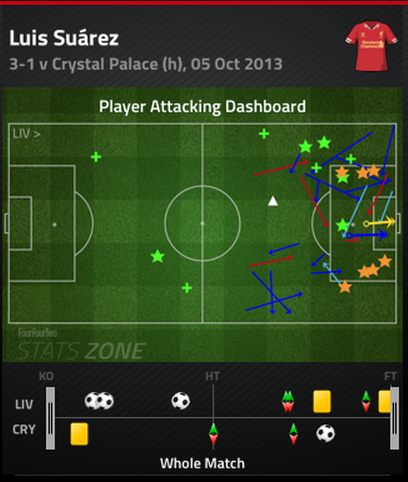 Well Palace is not a great side it must be said but I don't think Holloway helped his players much either. He failed to emphasis the importance of width against a three man back and his half-time switch was not very effective. Gayle brought pace behind Liverpool's defense, which was already sitting rather deep anyway, and Campana was yet another narrow central midfielder to join the likes of Jedinak, Puncheon, and O'Keefe.

For Liverpool, I still remain a little dubious of this system becoming standard feature. As I said last week, it works well against two strikers or an exceptionally narrow side (step in Crystal Palace), but a wider side with organized pressing could cause a lot of problems. Hopefully players returning to health and a deeper squad will allow this 3-4-1-2 to be rotated with the 4-2-2-2/4-2-3-1 hybrid we saw to start the season. Either way, Rodgers is showing himself to be a tremendously flexible tactician and deserves a lot of credit for Liverpool's early form.