Alright! A nice, good old-fashioned beat down at Anfield this weekend.  Steve Clarke finally dropped points against his former club, and once again SAS is proving to be the best thing since humans learned how to make fire.  Onto the show.

Things were pretty straight forward by Brendan Rodgers, with one nice twist.  In defense, Kolo Toure, Martin Skrtel, and Mamadou Sakho shielded Simon Mignolet's net, Daniel Agger may or may not be pissed.  Glen Johnson and Aly Cissokho remained the wingbacks.

The twist however, came in midfield as Rodgers flipped his midfield triangle and Victor Moses was the man to make way for the returning Lucas.  It's a sign of Jordan Henderson's growing influence in the side and Moses's own poor fit for the central role that Rodgers switched from a 3-4-1-2 to a straight 3-5-2 (minor difference, but it counts) against the Baggies.  Hendo and Lucas were joined by El Capitan in midfield.

Up top, Daniel Sturridge and Luis Suarez continue to struggle and it's only a matter of time before one of them gets dropped. 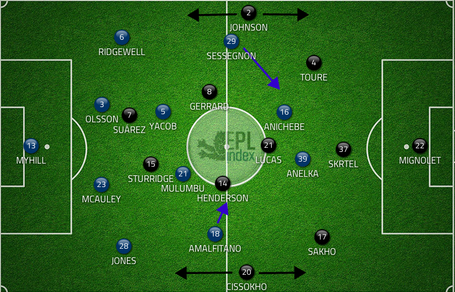 On the other side, I was a bit surprised by the tactical designs of Mr. Clarke.  Liverpool fans clearly hold respect for his tactical nous, and he did nothing but enhance that reputation over the course of the past year with the Baggies.  On Saturday though, Clarke put together a very ineffective 4-4-2 that held no real advantage against the Reds.

Boaz Myhill was between the sticks and was protected right to left by Billy Jones, Gareth McAuley, Jonas Olsson, and Liam Ridgewell.  Midfield saw the hard-nosed central duo of Youssouf Mulumbu and Claudio Yacob flanked by Morgan Amalfitano and Stéphane Sessegnon.  Up top, the increasingly sterile Nicolas Anelka was joined by former Toffee Victor Anichebe.

Liverpool's rear guard wasn't really troubled through much of the contest as Anelka and Anichebe combined for just four shots, one of which was on target.  Assuming Clarke had watched Liverpool's previous fixtures, he must have noticed that the way to attack Liverpool's 3-5-2 setup (regardless of the persuasion of the midfield triangle) is to play three across the front and stretch play.

Anichebe is a great athlete but stayed in a central role while Anelka is growing ever more static each passing week.  Toure-Skrtel-Sakho have had far harder days at the office. 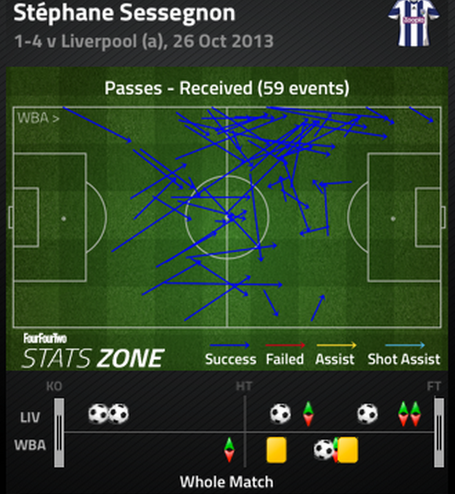 Out wide, Stephane Sessegnon was the real outlet for West Brom, receiving 59 passes over the course of the contest.  The problem however, was the Baggies' failure to consistently make complementary movements around him.  On the frequent occasions he received the ball out wide on the touchline (correctly trying to stretch play), Anelka and Anichebe rarely made incisive runs down the left channel.  Even when he did link up with his forwards, it was either a flat pass, or if it were direct, almost exclusively from a central position. 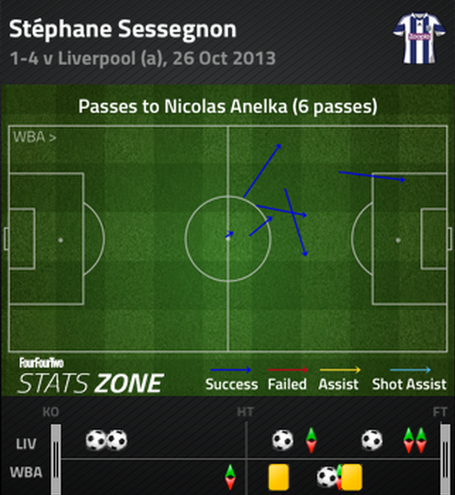 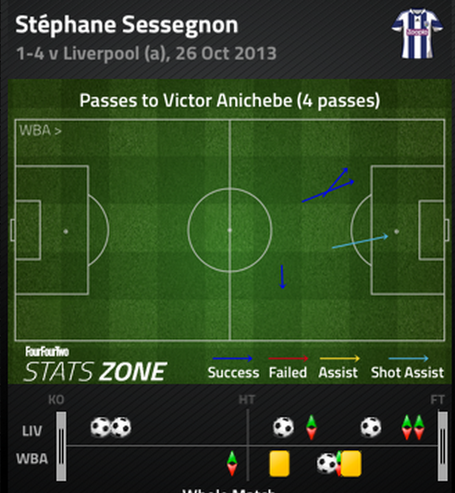 This brings us to the next failure in West Brom's system, Ridgewell failing to provide a threat on the overlap. When Sessegnon cut inside and linked up with the forwards, Liverpool were still able to cope numbers wise.  Johnson could either follow Sessegnon inside and let Toure/Skrtel deal with the forwards or let Toure/Skrtel deal with Sessgnon while he tracked the run behind into the channel. 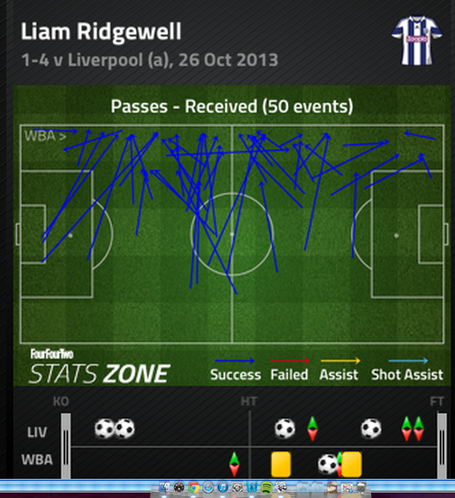 The Red defenders were comfortable either way, but had Ridgewell bombed forward to make it a 3v3 situation, they could have been stretched.

The right hand side of the Baggies attack literally didn't exist so it's not worth mentioning here.  Oh wait, except of course for the obscene penalty given (on what/who exactly I'm still unsure) but the less said about this incident the better.

This is where the goods are in this weeks TT.  Moses out, Henderson "in" - yes I know he never left but really, Lucas was always going to regain his place alongside Gerrard.  The midfield triangle flipped from 2-1 to 1-2 and, in my exceptionally unqualified opinion, the Reds were better for it.

The benefit of playing an advanced central midfielder is provide a natural bridge between midfield and attack, hugely important in a 3-5-2 so as to not leave the strike duo isolated.  Seeing as Moses was struggling in this job, to be fair to him it's not his skill set, it made sense to switch the triangle and see if Henderson and Gerrard could strike up an understanding over who advanced when. 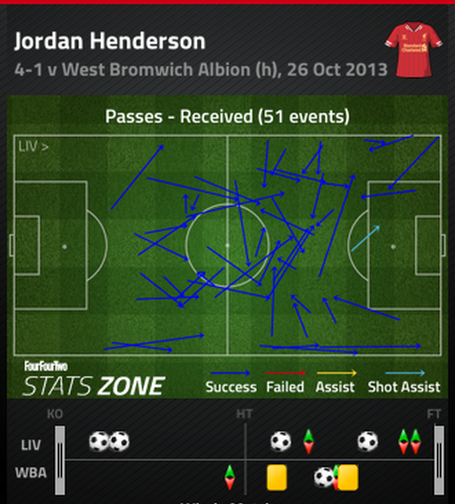 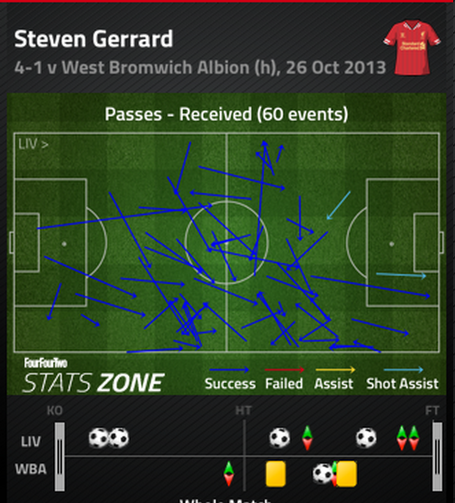 Seeing as the Reds boasted a higher possession rate, pass completion rate, total shots, and shots on goal, I find it fair to say Hendo and Gerrard led to a very balanced midfield.  Both players seemed liberated by the role as they both popped up all over the field to receive passes and link play.

The only real drawback, which Adam alluded to in the match wrap, was Henderson struggling with his final ball.  His vertical passing in the final third was always a touch heavy and an aspect of his game that could use some work.  For the system however, this midfield was balanced and played a big part in Liverpool's win. 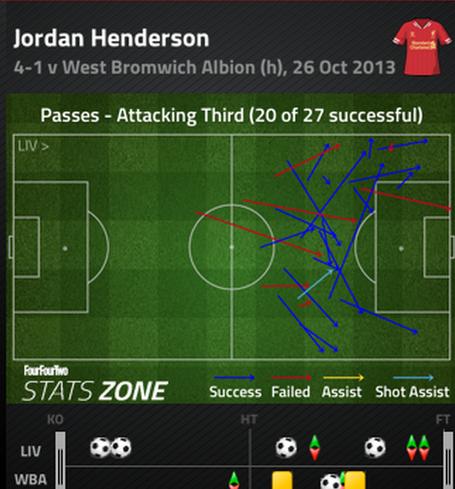 Calrke's decision to leave McAuley and Olsson 2 v 2 against SAS was the tactical equivalent of covering yourself in chum bucket and jumping into a shark tank.  Compared to West Brom's impotence, Liverpool's duo racked up 13 shots with six on target.  Once again, it's fascinating to see what respective roles Suarez and Sturridge ended up naturally assuming, because I don't think Rodgers needs to give them much specific direction. 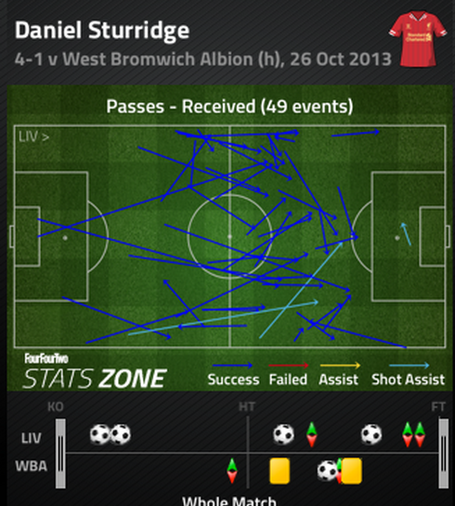 Here, Sturridge most frequently served as the link-up man, often playing in front of West Brom's back line to receive passes to feet.  He did also receive some balls in behind, but that's just because SAS is a freak-show that can pretty much do what it wants, when it wants.

With Sturridge helping link play, Suarez was left to his own devices and vociferously worked the channels to stretch the Baggies.  When he gets the ball in front of him with momentum to run at the defense, he's pretty much unplayable. 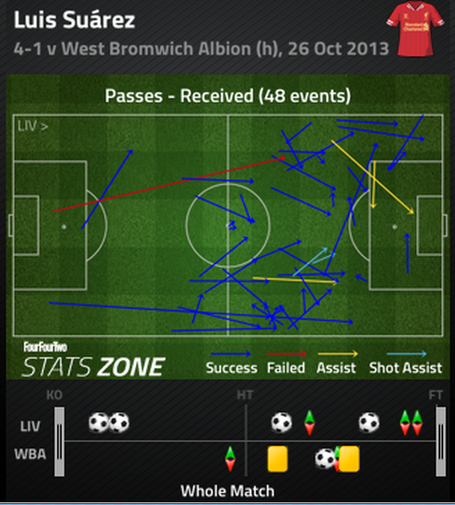 One final interesting nugget is Suarez's statistically higher success rate when attempting dribbles from the right hand side.  I don't know the answer for it, but going back to last year he has been demonstrably better when attempting take ons in the right channel.  Just ask Jonas Olsson. 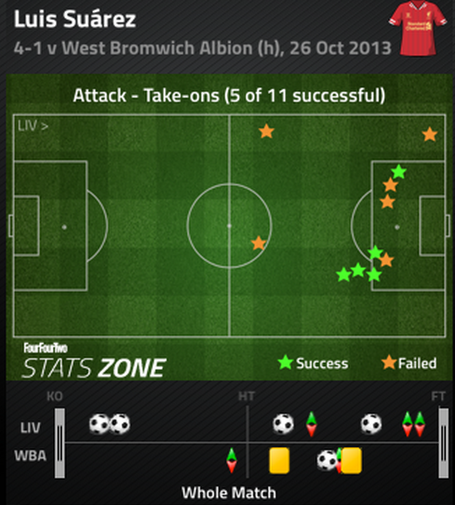 Well, that felt good didn't it?  A nice, clean whupping to a team that, incredibly, took six points from Liverpool last year.  The 3-5-2 worked very well against West Brom's 4-4-2 and the shifting of the midfield played a part in Liverpool controlling almost the entire match (why a cheap penalty in a three goal win still smarts I don't know).

Looking forward to the weekend against the Gunners, it will be interesting to see if Philippe Coutinho is ready for a start or if he'll only be granted 35 odd minutes off the bench.  I have the feeling we'll have quite a bit to discuss next Tuesday.