Tactics Tuesday capitalized on the international break to take a siesta of its own but now it's back to business as usual. Let's break down Liverpool's disappointing draw on Tyneside.

For many, Saturday mornings are about gently licking the wounds suffered the night prior. Unfortunately on this particular Saturday, the Reds seemed to be nursing hangovers of their own and Brendan Rodgers' travel-weary crew struggled to find top gear against Alan Pardew's équipe. Tactically, it's always hard to find takeaways when one side plays understrength for long stretches but there are certainly lessons to be learned from this week's fixture.

The shape from Rodgers was expected, some of the personnel changes were not. After the Northern Irishman came into the match stating he had his fullest personnel stock of the year, neither Lucas nor Jose Enrique managed to make the 18. The Brazilian's wife selfishly chose to go into labor on Friday (just kidding of course, congrats on the Leiva crew's addition of baby Valentina), and his Spanish colleague recovering from (hopefully) minor knee surgery.

So, with these changes accounted for, Liverpool kept the rearguard of Simon Mignolet, Mamadou Sakho, Martin Skrtel, and Kolo Toure. At wing back, Glen Johnson made his first appearance since his injury against United in the league and Aly Cissokho the same, though from the Whatchamacallit Cup.

On the other side, Pardew laid out a 4-3-3 with an interesting wrinkle. First, a standard defense of Tim Krul in net with Mathieu Debuchy, Mike Williamson, Mapou Yanga-Mbiwa, and Davide Santon across the back four. In midfield, captain Cheick Tiote shielded the defense and was flanked by Yohan Cabaye and Moussa Sissoko. Yoan Gouffran manned the right flank, but, notably, Hatem Ben Arfa played a central role while Loic Remy took the left flank. 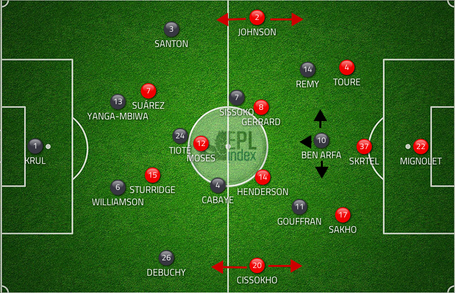 Pardew has clearly lost patience in waiting for Papiss Cisse to regain his scoring touch and is trying to put together a new attacking jigsaw. Ben Arfa was given a central station, though he roamed side-to-side and dropped deep into midfield to pick up possession. 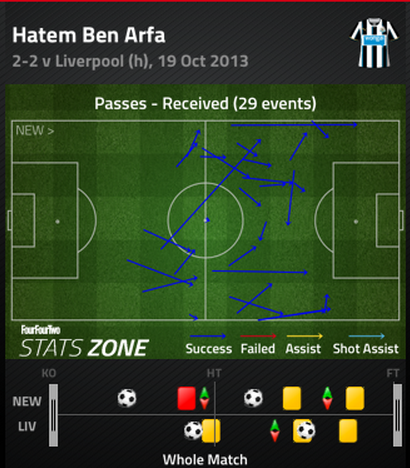 Now, you could argue that he struggled in this "false nine" role as he failed to: A.) create space for Remy and Gouffran to move into and B.) follow play and make runs into the area. He registered zero shots, while Remy and Gouffran combined for just three and none on target. This was largely due to the nature of Liverpool's back three. By and large, Skrtel refused to follow Ben Arfa into midfield, thus when Remy and Gouffran came inside the Reds maintained a spare man and Newcastle's front three provided little menace.

However since Skrtel didn't track him, Ben Arfa was able to find space between the lines - thus successfully distracting Gerrard and Henderson from tracking Cabaye and Sissoko. Sissoko cracked two shots while Cabaye led Newcastle with five - four coming before Yanga-Mbiwa's dismissal - all from range, and one beating Mignolet inside the far post.

Indeed, Cabaye scored his goal after play reversed from the left flank where Henderson contended with Tioté and Gerrard had tucked over to keep tabs on Ben Arfa. With no one in front of him, the Frenchman received possession, dribbled forward 15 yards and let rip on goal. 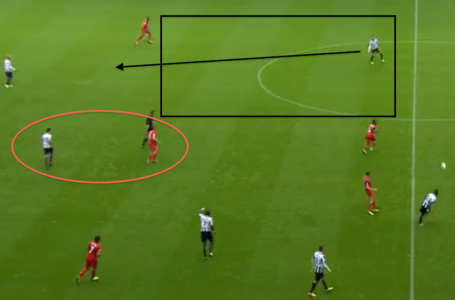 In years gone by, we would have seen a goateed Spaniard screaming and wildly gesticulating for Liverpool's defensive banks to remain more compact.

Though Pardew's offensive system only succeeded in generating attempts from distance (again, they scored so I suppose it succeeded), defensively the Magpies were very effective for the first 40 minutes. The 4-3-3 against Liverpool's 3-4-1-2 essentially left Newcastle matched up man for man across the entire pitch. 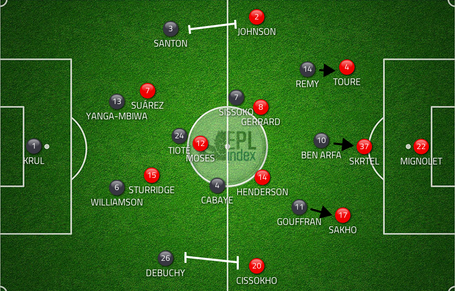 Newcastle's press wasn't necessarily a terrifying, Hun-like assault the full length of the pitch, but Sakho, Skrtel, and Toure often had difficulty turning up field after receiving the ball. The only Liverpool players with some kind of obvious space were Johnson and Cissokho on the flanks. The question here became how far Santon and Debuchy were willing to move up the pitch to truly suffocate Liverpool's build-up play but risk exposing their center backs 2 v 2 against Sturridge and Suarez.

Overall, the effect was Liverpool struggling to build play from the back, with many lateral passes by the Reds trying to enter the midfield third of the pitch: 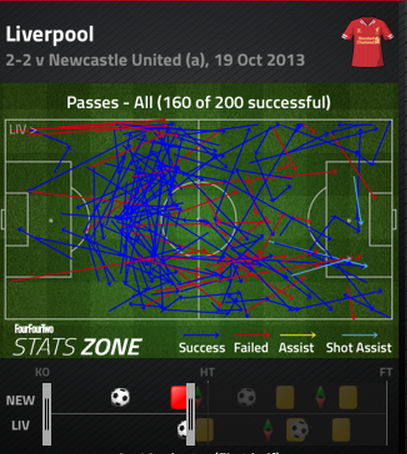 The Red Card and Pardew's Response:

Clearly, the game changing moment came from Yanga-Mbiwa's red card after taking down Suarez in the penalty area. The goat here was actually Tioté who lingered deep in his own end, rendering Newcastle's offside trap about as effective as the Maginot line.

Pardew would have felt unlucky to see his solid game plan and early lead nullified by Yanga-Mbiwa's dismissal and Liverpool's simultaneous equalizer. He reacted by removing Sissoko for young center back Paul Dummett and flattening his midfield by moving Tioté alongside Cabaye. Since he no longer could match Liverpool's midfield numbers, he logically abandoned his thus-far successful strategy of a controlled press. 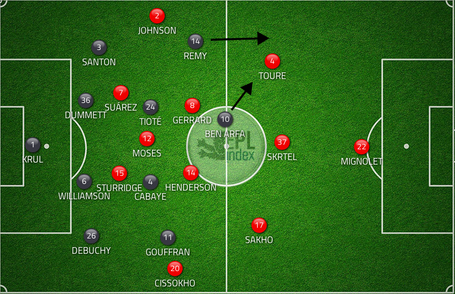 The change to a compact 4-4-1 is standard practice by many managers when playing with 10 men, but Pardew still kept things interesting. On the right, Gouffran's attacking threat was totally sacrificed (receiving just three passes after the red card) and Newcastle directed all its attacking down the left channel. Pardew kept Remy in a more advanced position on this side and directed Ben Arfa to focus on sliding this way to interchange on the break. 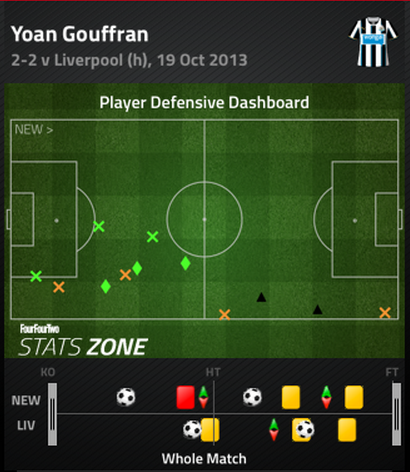 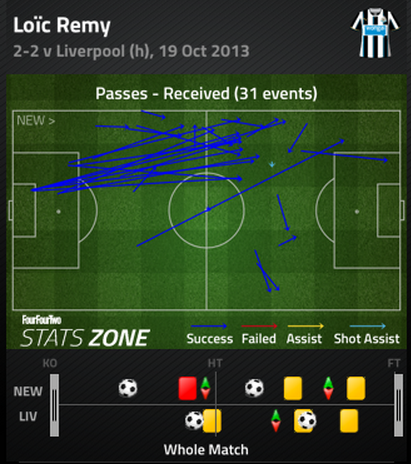 Though Newcastle's second goal came through Dummett on a poorly defended set-piece, it is worth noting how the opportunity came about in the first place. Remy beat Touré and knocked down a long ball to the nearby Ben Arfa, who was taken down by a clumsy Skrtel challenge. Cabaye's free-kick was taken exactly from the area where Newcastle focused its offensive counter-punches.

Much like the opener they conceded, Liverpool's second tally came from Newcastle opening up between the lines. Cabaye and Tioté both chased Alberto at the half-way line, exposing acres of midfield space that Suarez was all too eager to drop into. The Uruguayan brought Debuchy into midfield and sent a back-heel to Moses who had wisely moved into the now open left channel.

Suarez peeled away from Debuchy and motored into the space vacated by Williamson, before receiving Moses's return ball and sending a delicious cross over to Sturridge for the equalizer.

From there, it was the Three Little Pigs and, despite rattling Krul's foundations, the Dutchman's goal was indeed made of brick.

As I said above, this game is rather dangerous from which to take tactical teachings. Liverpool looked exhausted right from the first whistle, so whether a more-rested side could have picked apart Newcastle's press we'll never know. Then, obviously the entire script flipped on its head when Yanga-Mbiwa was dismissed.

In the 40 minutes of 11 v 11 however, we saw how a very organized 4-3-3 could cause problems for Liverpool's build-up play. Further evidence that the 3-4-1-2 is a nice tool in the kit, but should not necessarily operate as the default formation. Tactics can be something of a game of rock-paper-scissors, and for 40 minutes Rodgers put out a rock to Pardew's paper.

In the other dugout, some credit should go to Pardew for a solid game-plan. Beyond the organized pressing, his insistence of Ben Arfa up top and Remy an advanced left paid dividends - though Liverpool will feel more organized defending could have stopped both goals.