Happy Hump Day folks! To get you through to the other side and decrease productivity at your local place of employment, let's kill some time by dissecting the goals from Liverpool's 3-1 win over Sunderland.

Analyzing tactics and breaking down goals is always much more fun after a Liverpool win.  Although the 3-1 final tally camouflages what was a nervy game, we've got a pair of simply superb Liverpool goals to break down with The Gremlin's return and Jordan Henderson's indefatigable running big story lines.

Basically Daniel Sturridge can score whenever and however he pleases.  This time he sent a corner kick goal-bound via his shoulder.  I'm not complaining, he's not complaining, to the Sunderland fans complaining: go pop a beach ball.

This play is an excellent simulation of some of the major themes broken down in yesterday's Tactics Tuesday.

With Liverpool defending deep in the 34th minute, Mamadou Sakho broke up Adam Johnson's attempted pass for Jozy Altidore.  Crucially, the loss of possession has caught Sunderland left back Jack Colback in Liverpool's final third, totally out of position.  Jose Enrique gathered and calmly laid the ball off to Steven Gerrard (he should do this much, much more frequently) who surveys the space in front of him looking for an attacking outlet.

Much to his delight, Gerrard finds that Sturridge has moved into Colback's vacated flank and the Captain duly pings a magnificent 70-yard ball on a string to Sturridge's foot.  This combination shows A.) Gerrard's value in a deeper midfield role (the "Michael Corleone" roll if you will) and B.) Sturridge's intelligence off the ball cannot be understated.

Sturridge takes Gerrard's pass down with a first touch that would make Zidane blush, and we now get a look at the blossoming Sturridge-Gremlin partnership.  To totally debunk the notion that these two are incompatible, take a look at Suarez's movement off the ball here.  Upon Sturridge receiving the pass, the Uruguayan is actually quite close to his striking partner in midfield. 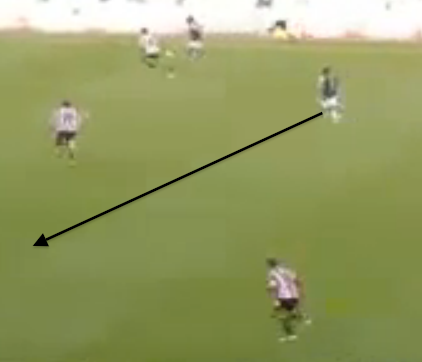 He then makes a great run into space behind John O'Shea, points to where he wants the ball, and then beats a lazy Craig Gardner to the tap-in at the back post.  Cue the first baby t-shirt.

Emanuele Giaccherini and Ki Sung-Yeung were Sunderland's best players on the day and they duly were the key contributors to the Black Cats' lone goal - though poor tracking by Liverpool played a big part.

Play rotated to Sung-Yeung from the right flank and, partly due to Liverpool's deep defending, the South Korean international was able to dribble directly at the Reds' midfield.  In front him, Liverpool's defense was in a period of transition as Gerrard was passing along the midfield run of Seb Larsson onto Mamadou Sakho and Lucas was contending with Giaccherini's venture infield from the left flank.

With right center back Toure occupied by striker Jozy Altidore, Giaccherini needed to be tracked by either Lucas or "center" center back Martin Skrtel.  The Italian's run and Sung-Yeung's simultaneous move forward with possession caught Lucas in between two minds at just the wrong time.  Not wanting to expose Skrtel but not wanting to leave Sung-Yeung free, Lucas ended up doing neither and was duly punished. 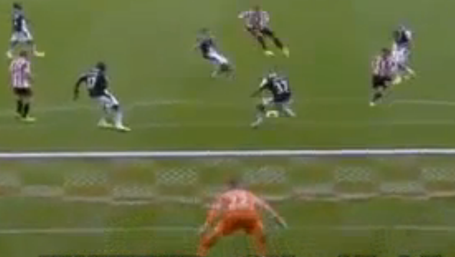 Not being closed down, the Korean fired a shot in from distance while Giaccherini continued his direct run down the center.  Some serious bad luck for Liverpool saw the shot nut-meg Skrtel, who fell trying to block it, and Simon Mignolet fail to either catch the ball or properly parry it.  Giaccherini's direct run towards goal was rewarded with a soft rebound and a tidy finish.

The second half was a tense affair for Liverpool fans as the Black Cats kept pushing for an equalizer.  Indeed, the Reds only dropped the guillotine as a result from a late Sunderland corner in the 88th minute and another ruthless counter attack.

In atonement for his role in Sunderland's opener, Mignolet proactively gathered Johnson's in-swinging corner and made an excellent long-throw up to Suarez at midfield.  The Gremlin ran with the ball to the gates of the final third and then dropped a magnificent ball down the left channel to the feet of Sturridge.

Sturridge's movement down the channel was tracked Giaccherini and this attack could have been snuffed out had Suarez been alone in contending with the retreating O'Shea and Colback.

The real key to this play however, was the remarkable run from deep by Jordan Henderson - a prime example of why I'm a totally unabashed member of his fan club.  After running himself into the ground for 90 minutes, Henderson busted his gut in a dead sprint up the entire field in order to support the counter.

The result of Hendo's run was that he drew the attention of O'Shea and brought the center back away from Suarez in the area.  Colback retreated towards the goal line, not the worst idea in the end, and the Gremlin was unmarked in the area.  A quick point to Sturridge resulted in the same outcome as his first goal.  Sturridge showed his defender the ball on the inside, cut towards the end-line, then pulled it back to an unmarked Suarez.  This finish was a bit more complicated, slightly behind him to his left foot and with Colback on the line, but it still ended with another baby t-shirt.

Daniel Sturridge's movement away from the ball and overall reading of space is top-notch and a totally underrated component of his abilities.  He's not just a goal poacher, but an all-around attacking menace.

Building on this, Luis Suarez will basically play nice with any intelligent attacking player (apologies to Andy Carroll).  I think back to his link-up with Maxi Rodriguez in Dalglish's successful half-season after Roy Hodgson.

Finally, Jordan Henderson is awesome.  He's a different player than Dirk Kuyt, but in terms of attitude, versatility, and fitness I think his role in the side is comparable to the Flying Dutchman.