Not all TT's are created equal and this week we have quite a bit to break down. Brendan Rodgers stuck with the three man back line we saw against Manchester United and Liverpool dug out a 3-1 win against a Sunderland side clearly thrilled at having shed the yoke of Paolo Di Canio. The question we'll try to answer here is whether Liverpool won because or in spite of Rodgers's persistence with three center backs.

With Daniel Agger seemingly half-fit, Rodgers fielded a defensive trio of Kolo Toure, Martin Skrtel, and Mamadou Sakho in front of Simon Mignolet. The wing back positions were manned by Jose Enrique on the left and jack-of-all-trades Jordan Henderson on the right. In midfield, the assumed duo of Steven Gerrard and Lucas Leiva played underneath a more central Victor Moses. Excitedly, Daniel Sturridge was genuinely partnered by Luis Suarez.

On the other side, interim Sunderland manager Kevin Ball set out the Black Cats in a standard 4-3-3 formation. Goalkeeper Kieren Westwood was protected by a back four of Craig Gardner, John O'Shea, Carlos Cuéllar, and Jack Colback. In midfield, Lee Cattermole scrapped, Ki Sung-Yeung directed traffic, and Seb Larsson focused on linking play in the attacking half. Further upfield, Emanuele Giaccherini and Adam Johnson roamed the flanks in support of lone striker Jozy Altidore.

Three man back lines are most commonly seen against an opposing strike duo as it allows the defense to maintain the all-important "spare man" at the back. This set up can be very awkward against a 4-3-3 however, as the defense is caught between a rock and a hard place. There's either no spare man as the center backs stretch wide to individually combat the opposing wingers, or the wing backs abandon their advanced positioning to double back against the wide men - it's essentially either three against three or five against three.

Although this wasn't a natural situation to implement a three man back line, Henderson and Enrique did an admirable job as wing backs. Enrique ended up defending deeper and narrower than he probably would have liked, but he still made it a point to motor forward down the touch line when Liverpool were in possession.

Henderson meanwhile, maintained a slightly more advanced position that allowed him to be a consistent attacking outlet. As Dan pointed out in the game thread, Henderson's positioning was great, his final product not so much as he succeeded with just 2/12 crosses and 1/5 take-ons. 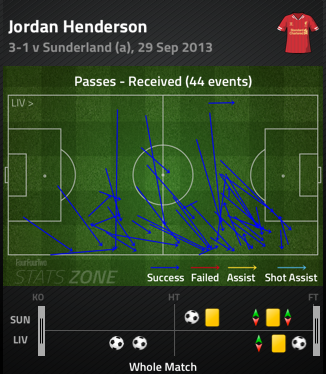 The effect of the wing backs' defensive efforts was Liverpool's half hosting 58.8% of proceedings and the Black Cats rattling off 23 shots to Liverpool's 15. Despite the game being played in Liverpool's end, the Reds largely kept Sunderland's threat to efforts from range with intricate forays into the 18 yard box were limited. 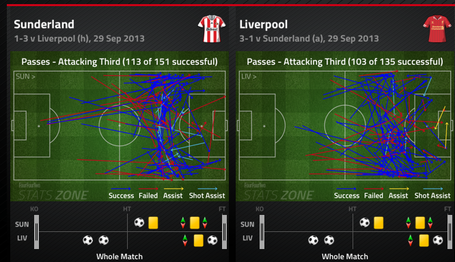 Toure, Skrtel, and Sakho combined for a perfect 27/27 in clearances, though it is the Frenchman's performance that is worth highlighting. In what is undoubtedly his best game so far, Sakho completed 47/49 passes, made a successful tackle, had three interceptions, two blocks and went 4/5 in his aerial battles.

Sunderland wisely emphasized its natural width, and directed much of its attacking play down the flanks to Giaccherini and Johnson. Collectively, the wingers had an interesting match in that they were serious goal threats (four shots apiece with Giaccherini notching Sunderland's lone tally), but struggled to contribute effective service. The duo combined to go 1/17 with their crosses and 4/14 with dribble attempts. Altidore essentially sacrificed himself by trying to occupy the center backs as much as possible, and let the midfielders and full backs move into space. 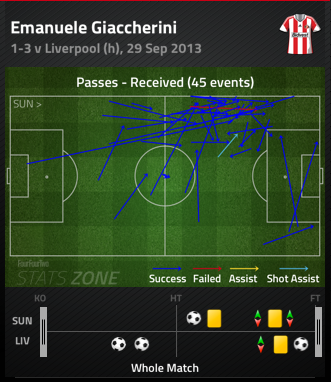 In some ways, Colback and Gardner were the key players for Sunderland's attacking system as they were essentially the "free" men when in possession. Since Hendo and Enrique dropped deep to help defend against the wingers, the full backs were unoccupied - though it's fascinating how they individually interpreted their roles.

Colback was tidy in possession and maintained a very high position on the left flank. He created no chances nor completed any crosses but he did send 18 passes to Giaccherini and the same amount to Sung-Yeung. His simple efforts helped Sunderland maintain possession in Liverpool's end.

Gardner took his role completely differently and was very adventurous. He received passes on the right flank but also in the center of the pitch, which is presumably what allowed him to rattle off four shots (two of which were on target). He completed just 22/35 passes, much fewer than Colback, and only sent the ball to his local winger, Johnson, nine times. Further, he attempted five crosses (none successful) and created one chance. Effectively, Gardner performed like an extra roaming midfielder.

Despite Liverpool winning the possession tally, the Reds' most potent attacks came when countering on the break. Lucas put in a solid performance and Gerrard accepted his increased defensive responsibilities - though they left him trying to orchestrate play from deeper than he'd prefer (just fine for Liverpool's second goal when he put the ball on a 70 yard string to Sturridge). The match's true standout midfielder was Sung-Yeung who went 48/51 passing (including a perfect 20/20 in the attacking third), notched four shots, and created three chances. Why Swansea let him leave on loan is a mystery. 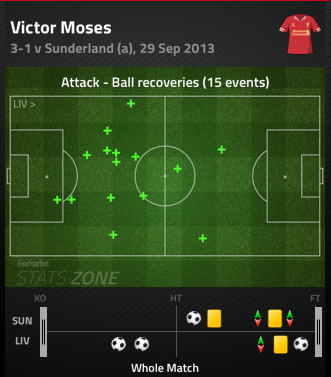 The most interesting midfield role belonged to Victor Moses, who was fielded in the hole between the midfield and the striking duo of Sturridge and Suarez. The Chelsea loanee recorded a whopping 15 ball recoveries (most coming in Liverpool's own half), immediately sprinting up field after gaining possession. When Liverpool had the ball, he largely drifted from side-to-side linking play with Enrique (eight times) and Henderson (six) - another chance to note Hendo's more advanced position. 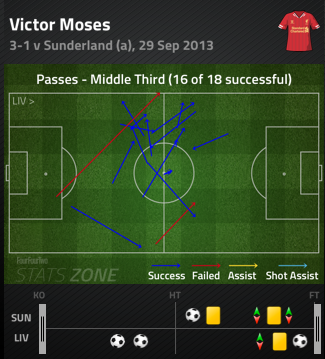 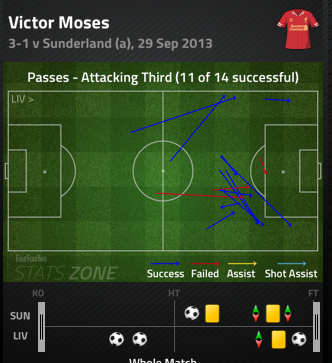 All in all, the Nigerian provided a mixed threat. He attempted to be aggressive with the ball taking three shots and attempting four dribbles (only one successful), but his passing was rather plain and he failed to create a single chance. Phil Coutinho was certainly missed.

This formation did have its flaws, but the one clear advantage was absolutely massive - a legitimate Suarez-Sturridge striking duo that Rodgers rightfully claims is the best in the league. While many would assume Suarez to be the more natural support striker, it was Sturridge who dropped deeper to link play. The Englishman only took one shot (his "shoulder goal" so he made it count) and he registered assists on both of Suarez's goals.

Suarez, meanwhile, notched seven shots and tried to work the channels against Cuellar and O'Shea. Compare the respective passes received charts of both players to get a better understanding of their movement. 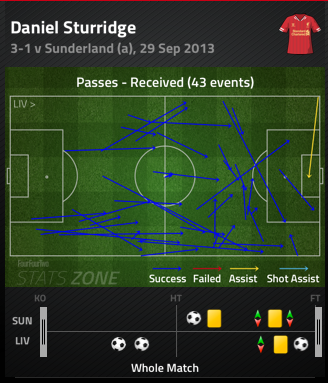 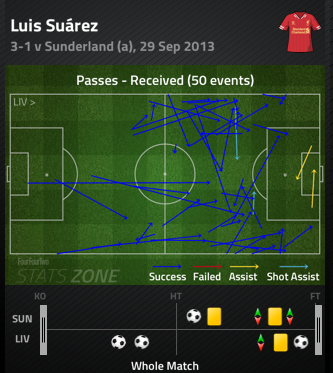 The question posed at the beginning of this post was whether the roughly 3-4-1-2 formation laid out by Rodgers helped or hindered Liverpool's win and it's still difficult to answer.

On the one hand, the three man defense was a bit superfluous and helped Sunderland gain a significant territorial advantage even if it had a slightly smaller slice of possession pie. It's also worth remembering that the game was actually a bit nervy, Mignolet was certainly tested before Suarez sealed the deal just before stoppage time. It amounts to a win via counter attack against the league's worst club.

On the other, the formation allowed for some fantastic Suarez and Sturridge interplay and the Reds got three goals from their striking duo. A win is a win, particularly on the road to a team fired up to impress a new manager.

Overall, I like this formation but probably only applied against either a striking duo or just an exceptionally narrow club. With Glen Johnson and Martin Kelly rounding into fitness, hopefully Rodgers can find a way to maintain the Sturridge-Suarez connection but with a more balanced rest of the side.