Tell Your Statistics To Shut Up

Finally back to having fun with numbers

Share All sharing options for: Tell Your Statistics To Shut Up

It took a while, far too long, but I found a new outlet after The Guardian stopped doing their chalkboards and Four Four Two wanted me to pay for the privilege if I even had an Ipad, which I don't. But thanks to Squawka, I've got my charts back! So let's share some from Saturday.

Here's the one I find most fascinating: 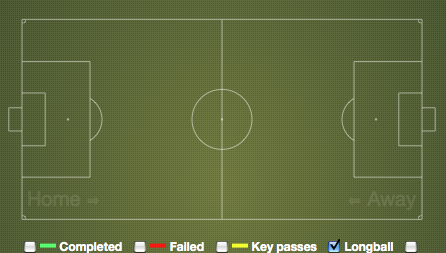 Doesn't look like much, does it? But this is a chart of long-balls and through-balls that Steven Gerrard attempted. Or whatever they categorize as that. And it looks like heaven to me. One of the more than a few complaints we've had when Gerrard is played as the most advanced midfielder is his desire for the Hollywood pass, something that has plagued him his entire career. Yes, he's had the vision and skill to actually pull it off more than most. But he's also killed a lot of possessions and momentum with them as well.

When Gerrard is the point of the midfield triangle, he looks up and has generally only seen Luis Suarez in front of him. That's usually because the other two front-men out wide are level with him. This has caused him to try through balls or knocking it into corners, which isn't really the way Liverpool want to go about things. He's also had an entire backline and defensive midfield in front of him, as he drops deeper than an anchoring player would want to follow him.

But when Henderson or even Shelvey are ahead of him, suddenly the options open up. That anchoring midfielder opposite has to account for the running of Hendo. The wide players are suddenly ahead of him. There are far more options. He can see them better. His runs from deep are better disguised. He doesn't have the legs anymore to shirk that kind of marking through running like he did when playing behind Torres. Giving him camouflage to do so through another attacking midfielder is clearly the best option. 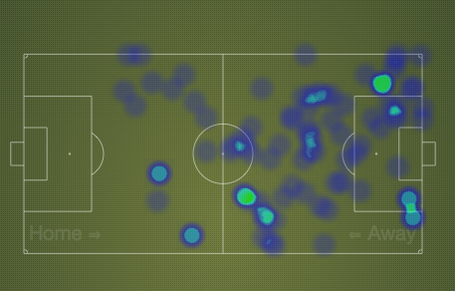 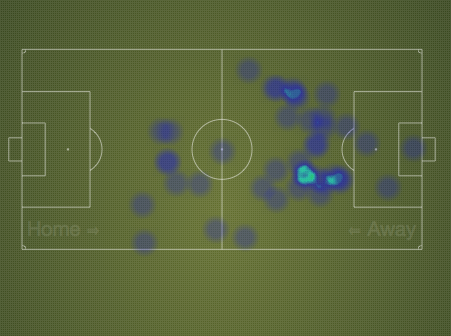 These next two are the heat maps for Luis Suarez (top) and Daniel Sturridge (bottom). Now, Sturridge doesn't match Suarez's activity, but then again who could? It's pretty clear from these that while Sturridge doesn't get out to the wide areas much, he's also not afraid to drop deep and let Suarez go ahead of him. He doesn't have to match the activity level of the Uruguayan, just know when and where to open up space for him. Such was the goal, with Sturridge coming deep while Suarez surges into the space he just vacated. It's fun to watch develop.