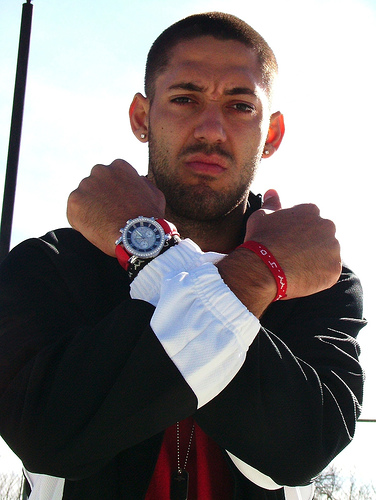 KICKOFF: 2:45 EST, 7:45 BST
TV: ESPN 2
FAYED FORUM: Cottagers Confidential
One last stretch, memorizing lines, and loosening of the tongue before the show begins (su su studio). I haven't been too good and predicting what Kenny will do, but then again who could? But general logic tells you that he's going to ring the changes.
We know, or at least we should know, that Steven Gerrard won't be asked to play three matches in a Final week. Carragher won't get two in three days, and neither should Agger. Skrtel was rested on Saturday probably to get his run out in this match. With Glen Johnson's injury worries, he almost certainly sits too in favor of Martin Kelly or possibly John Flanagan. If Fabio Aurelio wasn't dead, he would replace Jose Enrique, but sadly he is so the Spaniard is going to have to tough it out. Coates, for once, will get to join Skrtel in defense. Or so I would like to believe.

I think we'll learn a lot about what formation Kenny wants to play Saturday by what he does against Fulham. At Carrow Road, it was a 4-2-3-1/4-5-1/4-3-3 with Bellamy and Downing flanking Suarez. No way Suarez or Bellamy will be asked to play three matches in a week either. So does Carroll spearhead a front three of sorts with Kuyt and Maxi? Or would he partner Kuyt up top with four in midfield? Probably the latter, as Dalglish hasn't let Carroll play in a front three much and there might not be three central midfielders to field. Henderson could go as he's probably not going to start Saturday (depending on formation) and Spearing will come back in. Maybe Shelvey joins them as he almost certainly will play no part in the Final. And that's what I'd prefer to see, as both Henderson and Shelvey are better when they have a minder behind them in Spearing.
Fulham, while only one place behind Liverpool and having not much to play for in the league as well, have no Cup Final to look forward to. They've been a schizo side lately, having drawn with Chelsea but also getting smashed by Everton. They've taken points off City, and gotten whacked by Swansea. Quite simply, who knows what you're going to get from a team away from home whose destiny for the season is set? They could just be waiting for a vacation, or play free and easy with no pressure.
I'd like to think Clint Dempsey will be inspired to impress a club that would be interested in him in the summer. We heard the Deuce links back when Hodgson took over, and they died down pretty quickly. If he were five years younger, he would be a no-brainer as he's a lethal finisher and can play pretty much all across a front line and midfield. But he's 30 now, and who knows how many years he has left in the top flight?
Either way, he and Dembele can cause some problems, along with January buy Pogrebnyak. Look for Dempsey to play in the whole behind either the latter or Dembele in a 4-4-1-1. If Dembele is not up top he'll man a flank, with old friend trying to pull the strings in midfield. Brede Hangeland is going to be a major threat on set pieces, considering Liverpool are only somewhat cognizant of how to defend them.
The points don't matter really, but the performance does. And most of the players on display are trying to scratch their way into a Cup Final start, so we should see a pretty inspired effort from them. And putting distance between themselves and the bottom half of the table should be a concern as well.