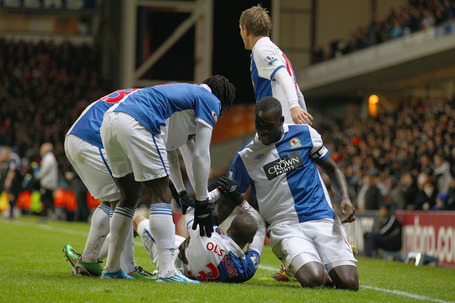 KICKOFF: 3 EST
TV: FSC
The only match that matters is Saturday, but Liverpool get one last chance to contemplate finding the right gears before heading into what is almost certainly a hornets', wasps', and possibly killer bees' nest at Wembley against a scorching Everton side salivating for that game. That it comes away from home against a relegation threatened team normally would be considered the perfect tonic. But seeing as how Liverpool have been tossing away points to bottom sides like they were underwear tossed at Coldplay, it in fact could be the worst thing possible.
An educated guess would say some key players are going to get a rest today. But nothing Kenny has done lately follows that pattern. Usually, you would guess Martin Skrtel would get some time in the sensory deprivation tank, which would allow Daniel Agger to try and get 90 minutes in before he's assuredly started against the Blue Shite. But with Jose Enrique also drinking the sand and having his form drop, Agger may have to be shunted out to left back with Skrtel keeping his place. Ideally, I'd love to see Aurelio brought in and Agger and Coates manning the middle, but that's going to be a wish.
In midfield, I can't fathom that Steven Gerrard will play, as jaded as he's looked recently. With injuries, that really only leaves Jonjo Shelvey, Jay Spearing, and Jordan Henderson to comprise either all of a three-man midfield or three-fourths of a four-man, with either Shelvey or Henderson shifted out wide to flap about like the fish in the video for Epic. If it's a four-man, likely it would be Craig Bellamy on the left, or possibly Downing again, who hasn't been that bad recently.
Up front, I would also think that Luis Suarez would get a breather, but seeing as how he's the only thing close to a goal threat that might not happen either. Andy Carroll should come back in either way, perhaps in one final stab at claiming a place for the semifinal. But he'd have to have a pretty dominating performance to do so, as now it seems Kuyt is preferred because....well, I'll have to get back to you on that one.
Blackburn come in after three straight losses, their last being a spanking at the hands of West Brom. They'll go 4-4-1-1 with Hoilett likely behind Yakubu. Yakubu always seems to score a stupid goal against Liverpool, something out of nothing -- like a long punt forward where both centerbacks bump heads and fall down and he crashes it in from there or the like. Pedersen is always a threat as well, especially on set plays which Liverpool haven't exactly covered themselves in glory with this year.
This is the exact kind of match you'd fear if things were going well. What looks like a batting practice pitch before a huge occasion a few days later, you'd always worry about getting caught looking ahead. But with Liverpool these days, this is the kind of match you fear because it's the exact they've been fucking up, and now with everything seemingly going wrong, you fear the worst. Maybe Saturday's somewhat comeback against Villa is a little spark to somehow end the season all right. Or maybe it was just a small blip on an otherwise uninterrupted downward trajectory before you shoot a dog in the park with your bebe gun and for a vegetarian Rents you're an evil shot.
Guess we'll find out. This will also be your gamethread. I'll post the lineups when they're out, and I'll be on the Twitters.
Update: The changes ring indeed. Glen Johnson is back, and Maxi, Bellamy, Carroll, and Coates come in. Agger does not but is on the bench. Team: Doni - Flanagan, Coates, Skrtel, Johnson - Spearing, Henderson, Shelvey - Maxi, Carroll, Bellamy
Blackburn - Robinson - Olsson, Dann, Hanley, Orr - Olsson, Dunn, Nzonzi, Formica - Hoilett, Yakubu