With It Over Now, Do You Know How?: Sunderland v. Liverpool Preview

Share All sharing options for: With It Over Now, Do You Know How?: Sunderland v. Liverpool Preview 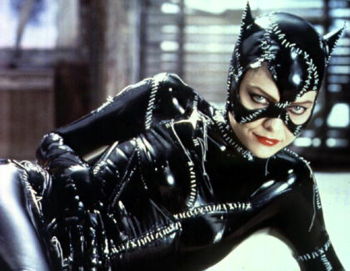 KICKOFF: 10am EST, 3pm BST
TV: FSC + for the Yanks
Stadium Of Light Lectern: Roker Report
Sorry Anne Hathaway, you're a dish but you've got a long way to go to look better in the role than Michelle Pfeiffer did. That's a bar that's been set way high.
Right, to the football instead of gorgeous women in vinyl. Though I know which is more fun to discuss. Anyway, now that Liverpool's league campaign is pretty much running out the course, it'll at least be interesting to see if the less pressure filled fixture causes them to just relax a bit and maybe finish a chance or two. Stranger things have happened -- and yes, I'm trying to put my prediction curse in reverse (gamblers call it a "stoogy") in the hopes that the Reds rip off their remaining league fixtures for some miracle close to 4th in May. I won't be accused of not doing everything I can, no matter how silly it might make me look.
Same injury concerns as last week, with Glen Johnson and Steven Gerrard still a doubt, especially with the Merseyside Derby waiting Tuesday. I would imagine Gerrard will be held off for that, so hopefully we'll see a 4-3-3 with a midfield axis of Henderson-Adam-Spearing. We've rarely gotten that, but Henderson is just wasted on the right and doesn't allow him to do what he does best. Seeing as how this is a match he'll probably be looking forward to more than most, I would love to see him put in the best position to succeed.
More likely we'll still get the 4-4-2 we got last week, with Henderson right and Downing left and Carroll replacing Kuyt up top. I'm sure Andy is drooling at the thought of scoring in front of the supporters he despised most, so he should start as well. With that personnel though, Kenny can float between a 4-4-2 or a 4-3-3 as he sees fit.
The big question will be at the back, and I think we'd all like to see Coates get a look ahead of Carragher. There's the derby to come which we know Carragher will probably get the start, and it's time to find out what we have here in the Uruguayan. Pace is always a concern with either, and with Frazier Campbell around that could be a problem, especially considering the speed at which Martin O'Neill teams like to counter. But he's gotta learn sometime.
It's funny. I know for a fact that Steve Bruce is a complete boob who only ever got managing gigs because he played for Man United. And yet his teams always seemed to get a result against Liverpool. O the other side, Martin O'Neill is a brilliant manager, and yet Liverpool seem to beat his teams more often than not (except for that whole Celtic in the UEFA Cup in that season we shan't mention).
That being said, Sunderland have had the expected improvement since switching from a total muppet to a guy who knows what he's doing. They've won 10 of O'Neill's 17 matches in charge, and are only five points behind Liverpool in 12th. Home form has been the key, only Arsenal have won there in the league, and then of course shot themselves in the face there a week later in the FA Cup.
Sunderland will be without two key contributors. Sessegnon and Cattermole will miss through suspension, so there goes a goal threat and assault and battery threat. All that means the main threat will be Seb Larsson from out wide, a lesson we learned far too harshly on Opening Day. His set pieces are going to be tricky as always, and that's not exactly been a forte of Liverpool's defending this season.
I don't care what the stats or scouts might say, any defense with John O'Shea or possibly Wes Brown in it has a chance of being cuffed. Now watch Brown duplicate his Persian Arrows routine from the reverse fixture.
Sunderland haven't won their last three league fixtures, and suffered a real kick in the teeth when a famous win at St. James Park was stolen from them in injury time last week. Hopefully they're still in a daze because of that. Then again, Liverpool might be as well with that crushing defeat and the Derby only three days after this one.
All I really ask of this one is like, two goals. As always, there'll be a gamethread up here a half hour before kickoff, and I'll be manning the Twitter feed during the match.