Yes, You Still Have To Show Up: Liverpool v. Wigan Preview

Share All sharing options for: Yes, You Still Have To Show Up: Liverpool v. Wigan Preview 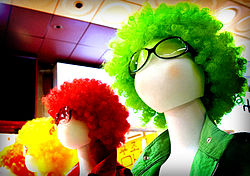 (really, there aren't a lot of jokes to be done with Wigan)
KICKOFF: 11am EST, 3pm BST
TV: FSC +
LATIC LAB: PIE EATERS FOOTIE
Well, you don't have to show up, but they do. There are still league fixtures to wade through before the FA Cup semi and hopefully Final. Will they be just a death slog as we all check our watches and wait for it all to mercifully end, and then have the dread set in of having some serious questions to answer this summer? Or can Liverpool find some reserve of emotion, and for no other reason than it'll feel better close with some flash in that vain hope that it builds momentum for next season (which I've never bought. Look at this one).
I think i know how this goes, but would like to be proved wrong. There are gut punches and then there are what happened at Loftus Road, and only teams with steel veins come back from that. Considering Liverpool's lack of punch in the league, I don't think that's them. But boys can dream and all that. Girls too, let's not preclude them from dreaming.
So, what will Liverpool throw out there? With Charlie Adam looking done for the season -- when I said I didn't want to see him in a Liverpool shirt again that isn't what I meant -- there seems to be little option but to put Spearing and Gerrard in ink on the team sheet. Sure, Shelvey may get a game at the tail end, because Kenny still think Liverpool are in the chase for fourth and kids have no room to play in a side that's chasing something. Or some other shit. Maybe you could get away with Henderson and Spearing or Henderson and Gerrard in a 4-4-2. Either way, Gerrard and Spearing will be running on fumes soon.
With Henderson coming back into the side, it's time that Dalglish puts him in the best possible position to succeed, though I've been pounding that drum all season and all I've got is a headache. He doesn't fit in a 4-4-2 outside or in a 4-2-2-2. Go 4-3-3, put him ahead of Gerrard and Spearing, or even just behind Gerrard. Even that would be better. Downing-Carroll-Suarez up top, or if Suarez needs a rest put Kuyt in there. This isn't that fucking hard, and yet Dalglish keeps making it so.
In defense, I don't see how Martin Kelly can possibly be trotted out there again on legs that have to be made out of broken legos at this point. That will probably mean Carragher out of place at right back, because that went so well in the final 13 that shall not be named on Wednesday. Though I bet our Managing Scot would have an aneurysm if he had to throw Coates and Flanagan out on the same backline. Expect Coates to get a look in between Skrtel and Carra, even though he'd be better on the other side of Skittles. Jose Enrique and his oxygen mask will still be on the left.
Right now, I think all I'm asking is for Carroll to score regularly from here on out. We've sort of seen the rest of his game start to poke its head out of the sand and sniff around, but the ruthlessness hasn't shown up, if it was ever there before. If he's the only "future" part that's going to get a look this last little bit, I want it to be encouraging. If nothing else, I want to see the Geordie prove that he can be a useful squad player for a Champions League team, like Crouch did back in the days that didn't seem so good but now seemed way better than I thought they were then.
As for Wigan, there's not getting around the fact that they blow. They're only off the bottom on goal-difference (didn't I write that earlier in the week? UGH.), and have scored 15 goals all season in the league. They have one win in 15. So I'm fully prepared for a 1-1 draw as Moses scores on the one shot they have.