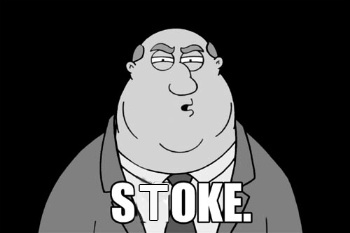 KICKOFF: High Noon on Sunday (EST)
TV: FSC
Who's up for two more trips to Wembley? All of us? Good.
Liverpool can guarantee one more with a win on Sunday. And they'll have to get it over a side I'm pretty sure we're all tired of seeing in Stoke. This will be the fourth and final clash of the season, and thankfully there can't be any replays so this is it.
Generally, Kenny Dalglish tends to stick with a side that produces a fine win as Liverpool did on Tuesday against Everton, unless fatigue or injury forces his hand. So that's what I would expect to see for this quarterfinal. The only change I could possibly see is Adam in for Spearing (insert wretch here), as there isn't a huge need to break up midfield play with a destroyer like Spearing because Stoke tend to bypass midfield anyway. But if Kenny doesn't have to, he generally doesn't. Why mess with it? It still shunts Henderson out to the right where he's less effective, but he found a way to play a part in the first two goals on Tuesday from there anyway, and hopefully that trend continues.Even Carroll's defensive ability in the air will be welcome against Stoke's Dresden like tactics.
After exiting the Europa League to a Valencia side that's simply in a different class, Stoke ripped off wins at home against Norwich and Swansea, which must be nice. Wouldn't know. Last week they gave Chelsea pretty much everything they wanted while down to 10-men after an idiotic sending off from Ricardo Fuller, who's still in my team photo of players I can't believe play in the Premier League and yet always seem to score against Liverpool. Because of that, he won't play at Anfield.
Stoke haven't faced a Premier League squad to get here, and haven't beaten a top-half side since the first week of December, which was at Everton. They last time they got a point off one will cause you to start shaking and get dizzy, as it was that insipid draw at Anfield. Ah, memories.
You know the drill here. Some combination of Kenwye Jones. Peter Crouch, and Jonathan Walters will be up front, or Jones will be there by his lonesome with Walters moving to the wing opposite Matthew Etherington. There will be three cinderblocks in midfield, starting with Dean Whitehead, and Huth and Shawcross will be the roadblocks in central defense.
If Liverpool are going to scare Stoke, they have to attack with the menace they did against Everton, and that means direct at pace. Not hoofing it long to Carroll's noggin, but with incisive passing all headed the other way, getting bodies forward before Stoke can set up the barricades. If this just devolves into Liverpool probing and circling the amassed Stoke bodies in front of their 18-yard box, it's going to be 120 minutes of torture. Press up high, try and cause giveaways and turnovers, and pour into the cracks.
As for Stoke, well, you know. They'll live off set pieces and high balls, and Liverpool haven't always exactly shut that route down this season. They also haven't built off what we considered big wins, and this may be their last chance to do so. Cock this up, and the season is essentially over. There won't be any big wins remaining to be had.
Could be a very tasty final four for the FA Cup with Chelsea, Spurs, Liverpool, and Everton comprising a foursome all in the top half. Or it could be without any of them. Let's at least do our part.
Note: Guess there can be a replay. Thought they had done away with those at the quarterfinal stage. My bad.