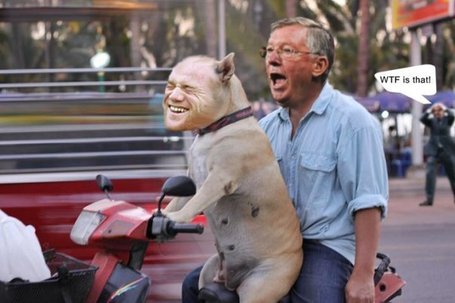 TV: ESPN2 in the States, Sky Sports HD2 in the manager-less UK

Here we go again, but this one is in the lion's den. These matched rarely need a spark for a fire to break out, but this one already seems to be smoldering underneath. A simple puff of air and the whole thing will be alight. I don't want to spend too much time discussing the obvious, but I hope that cooler heads prevail. That said, given the treatment of Patrice Evra by Liverpool fans in the recent FA Cup match, I expect twice as much abuse for Luis Suarez. As always, this usually means despicable chants about the 96 and anything else. Hopefully I will be proven wrong, but I seriously doubt I will.

Enough about that, on to previewing a game I always look forward to and dread at the same time. Since the recent raid on the local retirement home that United pulled, their midfield has been a bit better as we saw in the FA Cup match. Paul Scholes, cane and all, controlled the midfield until he was taken off around the 75' minute, likely because his Depends was full. This will likely be the key match up in determining how this game goes. If Scholes can put in another performance like he did and pin Liverpool in their own end, then I expect a less than favorable score. United will surely finish much better at home.

However, United have not exactly hit top form this year and who could blame them? They have had a starting eleven in the physio's room nearly all season. The injury to Tom Cleverly probably hurt the most, yet somehow they manage to win games that they have no business taking points from. Sometimes that is helped by Howard Webb, but usually it is a gritty grind it out style that they have adapted to playing.

These games are not like the others though. Liverpool could be in relegation position and you would still feel like this was a 50/50, much like the Merseyside Derby. There is an electric atmosphere from both sides that the players always seem to feed on, ensuring a fantastic game. In fact, I can't remember a Liverpool United game that I would say was a dull affair and there is no doubt that this one likely won't disappoint.

Some talking points to watch for:

-Will Evra and Suarez shake hands? I hope so and put this all behind them/us so everyone in football can move forward. PFA Chief Gordon Taylor also wants it to happen.

-Will the taunts and boos spur Suarez on? He has already come out and said they will, but we won't know until the first whistle.

-Can Liverpool take back control of the midfield? We were missing Jay Spearing last time and Jaime Carragher looked as bewildered as a pastor in Amsterdam in the holding midfielder role.

-Will Liverpool finally improve their finishing? I think it is a must if we expect full points, I suppose that is an obvious statement though.

-Will Andy Carroll start? Can he continue this decent run of form? By decent I mean doing what every professional player should do. For Carroll, that would be decent in my eyes. Anything over that would be outstanding.

-Would we be better with Luis Suarez and Craig Bellamy up top? I think it would at least pin United's defense and Scholes a little deeper making it a littler easier to control the midfield.

That is all I have. The GameThread should be up at 7:00am ET. If you want to check out a preview of the game from a Manc perspective check out The Busby Babe's Preview.