Share All sharing options for: Liverpool Blog Madness Results - Signing of The Season 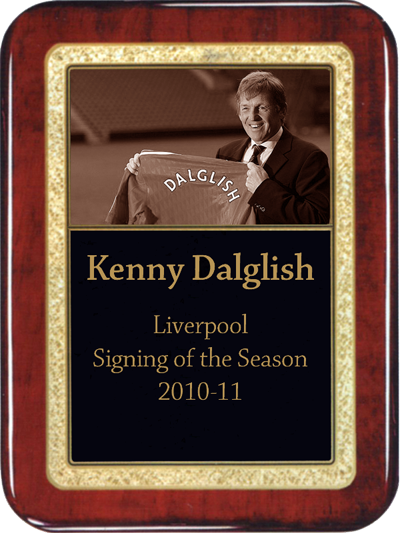 This was the closest vote we had. The semantics can be argued, but not the reasoning. Anyway, after the jump, everyone chimes in.

Gareth of Well Red: Luis Suarez: So-called experts, sitting on crap crouches with crap shirts and crap hair, tell us that foreigners need time to adapt to the pace and power of the Premier League. Load of crap. If that's true, no-one's told Luis Suarez. It's easy to forget that the Uruguayan has been on these shores for four short months. And it's hard to believe that he is playing for US - did no-one else notice he'd rattled in 48 goals in Holland? This fella is good enough to be playing for any team in the world - Barca, Real, you name it. He's a hero already - he'll soon be a legend. He's the best bits of Robbie Fowler and John Barnes all rolled into one. With teeth. He's also bought a nice bit of niggle to the side - pulling hair here, stamping there. It shouldn't be condoned, but come on, you like it don't you? Can't wait until he adapts to the Premier League.

James of Unprofessional Foul: Luis Suarez: While others gnash teeth and hurl invective that King Kenny was brutally snubbed here, I'm in firm agreement that the pesky Uruguayan was the A1, primo, top-drawer signing of the year without question. We could even overlook the fact that the stunning business was done in January, a time of year that normally sees your club signing overpriced chum like Jan Kromkamp or Eric Djemba-Djemba as opposed to some brutally brilliant world class talent that'll set your side up for seasons to come. It didn't take long for Suarez to prove his worth; sublime on-the-ball skill, tireless energy off it, and the kind of kinetic thinking that used to define Liverpool Football Club all over the pitch. And, given the fact that he was brought in amid the same hysteria that saw Fernando Torres helicoptering his way to Stamford Bridge, it was even more vital that the spoils of the Spaniard's departure were put to immediate, effective use. Getting the wrong player with that windfall would have further intensified the magnitude of changes that were underway at Anfield, but Suarez' arrival shows that there well and truly is Life After Fernando, and plenty of it.

Nate of Oh You Beauty: Kenny Dalglish: Voting for the manager seems almost like cheating. No matter how many times I stared at the poll, there was no other option. Suarez is a wet dream of a footballer. Meireles has become one of Liverpool's most consistent players, and is crucial to the re-discovered pass and move. I'm certain Carroll will come good. But the King is the King, and his return has changed everything.

Mike of Avoiding the Drop: Luis Suarez: The sentimental pick was Kenny but I still went with Suarez, then Raul, then Carroll. While Kenny's presence is obviously the biggest contributor to the turnaround after the New Year, I think from an on-field perspective our level of anticipation for next season would be nowhere near where it is without the signing of Suarez. Getting the deal done was a massive first step for the new reign, and considering they had essentially a blank check to work with they could have gone in any number of directions. To bring in someone who had disicipline problems, hadn't been playing lately, and who would have to "adapt to the premiership" was a gamble. There were not many who thought Suarez would not come good, but most seemed to think he would take time to settle, which was what I thought. But Suarez single-handedly blew the lid off the adaptation myth this season. In my opinion Suarez is already the best striker in England. His cut ins look effortless and even knowing where he is going to go with it defenders have been largely left watching. I think he provides so much to the squad that it has to be the signing of the season. We could not afford to have another six month waiting period for return that we have seen on recent strikers, and Luis provided the spark up front to reignite a stagnant offense.

Amy of A Football Report: How could you NOT vote for Kenny Dalglish? Surely that's blasphemy? Treason? Hmph. The thing is, would Suarez be as finger-lickin' good if he wasn't given licence to play free-flowing, attacking football? Somehow I doubt he and Roy would have got on very well. Meireles was stunning business at a cool £11m, and Andy Carroll will be a gem once the tricky supply line has been sorted. But Kenny is the one giving us hope and allowing us to dream. And he's worth every single penny.

Steven of Paisley Gates: Luis Suarez: Although it’s hard to argue with the crowing of the King, a certain Uruguayan is still my shout for the Signing of the Season. Luis Suarez has been nothing but monstrous; a work rate that rivals Kuyt’s, an eye for goal that more than makes up for the loss of that one Spaniard and a fire inside that drives him to literally bite the opposition. Kenny may be the one pulling the strings but Suarez is the one bringing us to our knees. The Kop just can’t get enough and neither can I. Sam of Anfield Asylum: Luis Suarez: Signing of the season: I get it, it's creative to pick a manager as a signing. But that doesn't count. He's a hiring. And it wouldn't have looked all that good if Luis Suarez wasn't covering all the land that isn't underwater and caving in defenses from all angles. I love Kenny, I really do, but a manager only looks as good as his players allow him. And considering that Suarez is pretty awkward looking, his play is just that much better. United is still looking for him.

If you didn't check them out yesterday, see Worst loss at Liverpool Offside, and Best Win at Oh You Beauty. 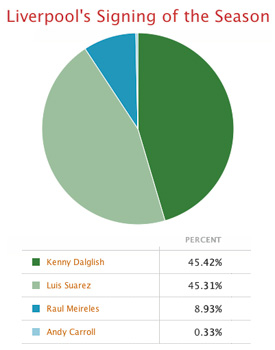