Share All sharing options for: Liverpool Blog Madness Results - Performance of The Season 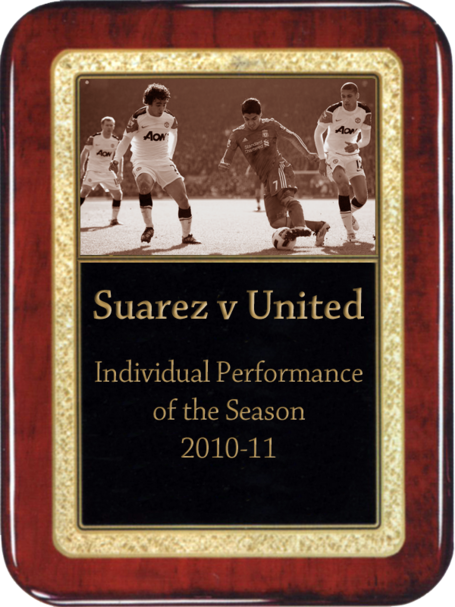 Well, after getting all your opinions we have to hand these things out, don't we? This one was one of the easier ones to predict. When you tear the team we hate most apart, well, you earn our esteem for many years. After the jump, see what everyone else had to say.

Ed of Liverpool Offside: Suarez v. United: In the 89 minutes Luis Suarez was on the Anfield pitch against Manchester United, he went from exciting potential to complete package, and from a signing we all hoped would work out to Liverpool's savior. As we've become accustomed to in the time since, he was all-action from start to finish, running tirelessly and getting himself involved at every possible opportunity. His role in all three goals is well-covered, but it seemed like everything he did that day was in search of a goal, from tracking back to chasing balls down to undressing no less than four defenders in setting up Dirk Kuyt's opener. He topped things off by sprinkling in a healthy dose of crazy, which, while concerning at times, further endeared him to the Liverpool faithful in one of the most heated fixtures of the season. It's hard to meet expectations in a match like this, but Suarez absolutely blew past them with this masterclass.

Nate of Oh You Beauty: Suarez v. United: Suarez did everything but tattoo his name on every United player's forehead. Thankfully, it's not as if they needed to be inked for a permanent reminder just who took them to the woodshed. Every now and then, I can still hear Wes Brown's night terrors from across the ocean.

Noel of Liverpool Offside: Suarez v. United: In a way, this one performance was almost just too damn good. It was Torres scoring his first goal with Liverpool against Chelsea, only it went from start to finish, wreaking havoc all over the pitch. Or, seeing as it was against United, it was Christiano Ronaldo's performances against the like of Wigan and Redding and Zaragoza—only it was in a big game when it mattered most instead of being the flair of a flat-track bully. It was a performance to all at once create a legend's foundation and then to set his personal bar so high no player in any league in the world could reasonably be expected to match it ever again. Only he did match it again, or at least come close. This, then, was the match in which Luis Suarez both proved himself to the rest of the league and also set expectations unreasonably high before going off and taking much of the rest of the year to prove that for the feisty Uruguayan, there would be no such thing as too-high expectations.

Here's how the voting broke down: 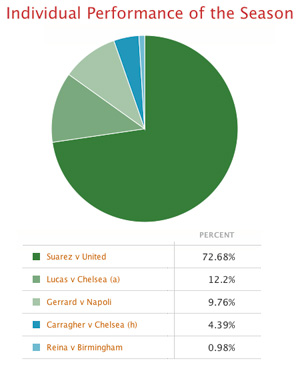 Make sure you check out The Young Player of the Year at Oh You Beauty, goal of the season at Paisley Gates, and tomorrow look for worst loss at Liverpool Offside, as well as best win back at Oh You Beauty.