No, not this one. I'm talking about whatever that was that went on Sunday. There's an odd anomaly about that match. Check out the average position of the Liverpool players: 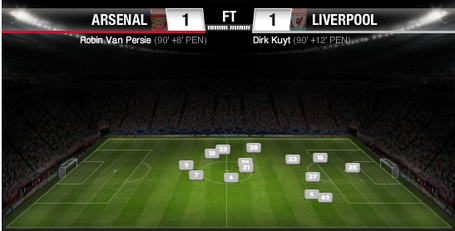 Look at where Flanagan starts. He's up with the midfielders. This shows a willingness to get forward, I guess. It just seems weird that he'd be that much farther forward than the fullbacks on the other side. Perhaps it has something to do with Theo Walcott remaining out wide whereas the left-sided Samir Nasri drifts in more, thus Flanagan would have different assignments. And look at how lopsided having to deal with Walcott kept us, as well as Robinson's jittery-ness to get forward, which is completely understandable.

Also curious is how much farther back Menelaus starts out than Carragher. Granted, Kyrgiakos came on right when the Gunners were really starting to press, so naturally he'd be pushed back a little. But I think it demonstrates that Kyrgiakos is as terrified of being out there against a skilled, speedy team as we are seeing him out there.

-Oh You Beauty has a pretty fascinating post up today about how the Reds are actually better when they have less of the ball this season. Especially since Dalglish took over, Liverpool have been an effective defend and counter team. I don't know if this is how the future should go. At some point you have to dominate the ball and be able to see out a match while doing so. Then again, Mourinho's Chelsea teams were essentially the same, though with probably more ball-retention and attacking flair than they got credit for. United is built to attack at lightning speed, not roll you over by stringing the passes together. I guess there's no tried and true system to be a great team. But Liverpool for the past two seasons have struggled against the lesser teams because they couldn't break them down enough when given the ball, and some defensive abstractness didn't help. While the defense seems to have been sorted out enough under Kenny, over the summer players that can win those matches where it's upon you to score will have to be acquired. Too many blunt objects right now, I feel.