Not that you need me to point this out for you, but here's the difference in the defensive lines between Liverpool and Chelsea: 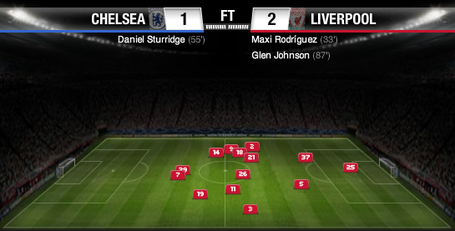 Just seeing how high up the pitch that Terry and Luiz get makes me giggle. It almost seems suicidal with the paceless John Terry and the brainless David Luiz. Also interesting is how much of a 4-2-2-2 Liverpool were playing to start, withe Bellamy right up with Suarez. But after the introduction of Henderson and Downing, it looks much more like a 4-3-3 or 4-2-3-1. But I guess we knew that.

-Forgot to mention in the wrap, and I still hate the guy's guts, but Gary Neville was a genuine surprise in the booth. My level of acceptance isn't very high. I pretty much ask that they're intelligible, don't simply narrate the replay, and point out something I might not have seen on first viewing. Not only did Neville do all this, but he was opinionated and creative. His line about Luiz being controlled by a 10-year old and a playstation controller was at least original and made his point as well. Not that I'll ever warm up to the man, but as long as I can play the trick on myself where I pretend the Neville in the booth isn't the one I wanted to bitch slap on the field for ManUre, I'll be fine.

-I have to admit that Black Wednesday, or Drunk Wednesday as some call it, is the time I miss Liverpool's presence in the Champions League the most. I know it should be the big matches in the spring and the chances of the ultimate trophy. But there was something special about ducking out of work early with no plans to return and kicking off a holiday weekend with a Champions League fixture. Hopefully thi swill be the last one in a while I go without.